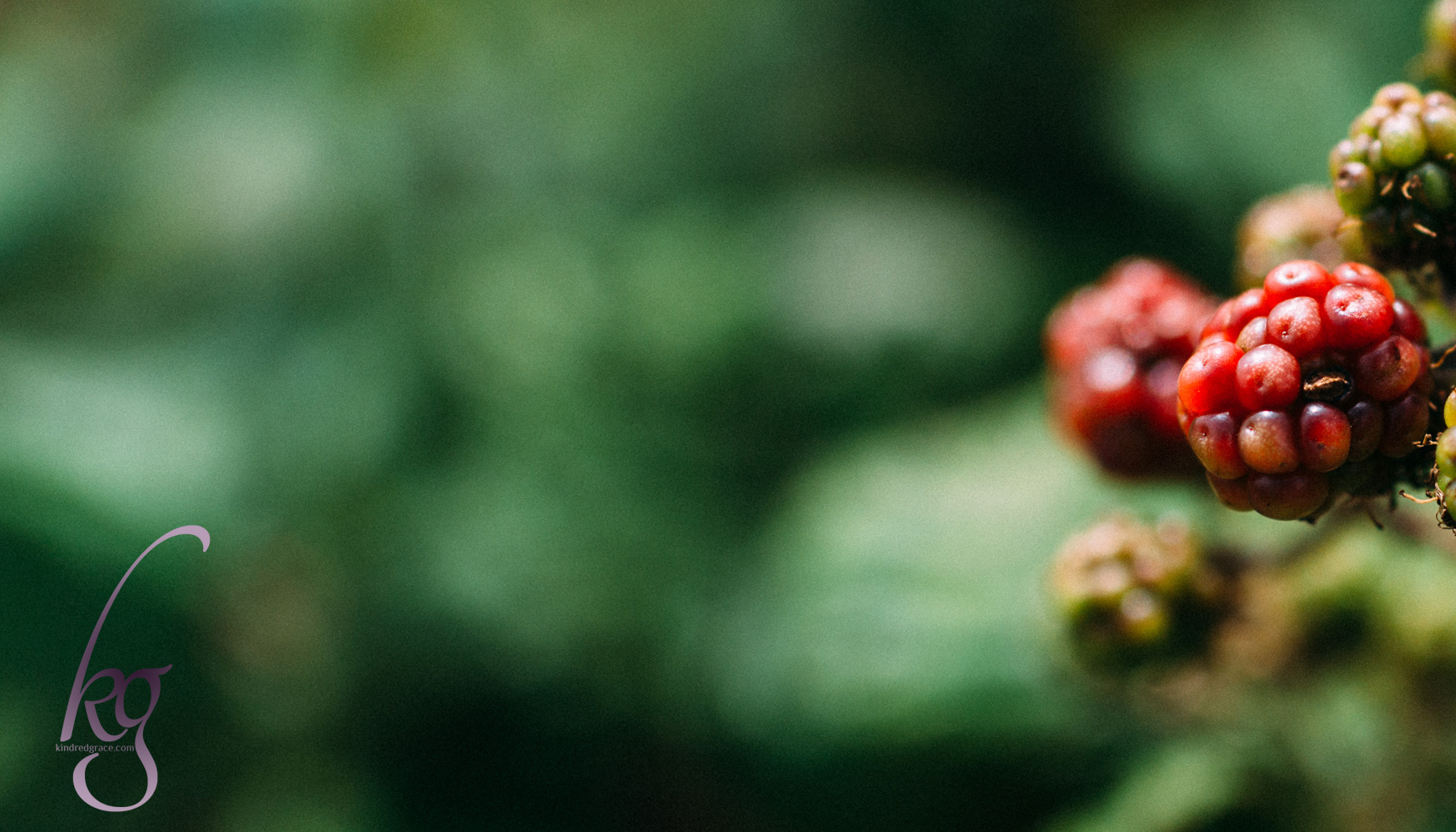 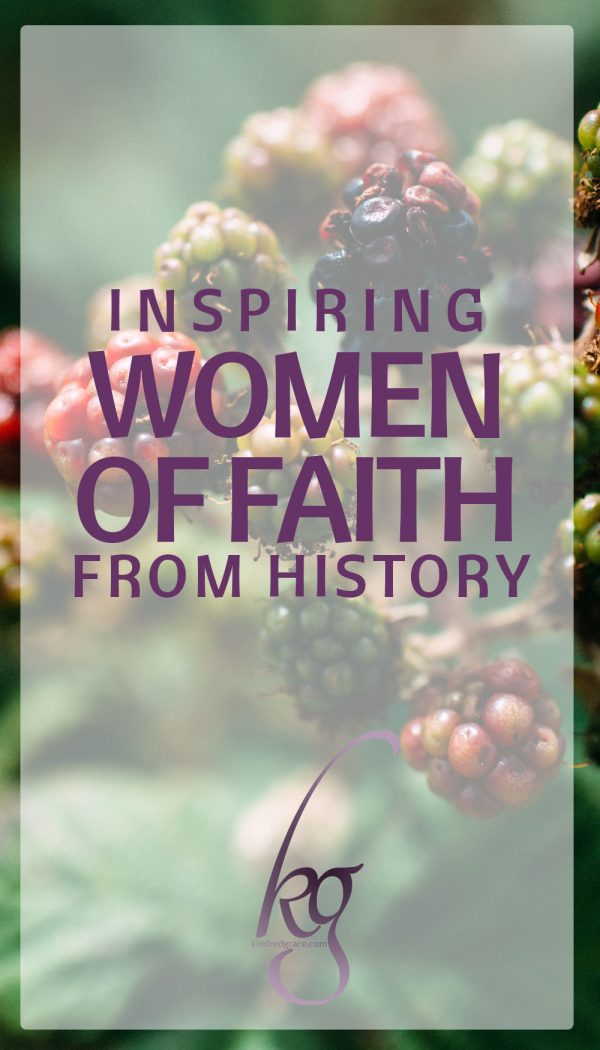 “God’s women, down through the centuries,
have enjoyed a freedom the world will find difficult to understand –
the freedom to be and to do that which God intended.”
(Ruth Bell Graham,
endorsing Believers: Lessons from Women of Powerful Faith by Gien Karssen)

I think I started wondering what it meant to be a woman of faith when I was about eleven. What I wanted more than anything else was a definite, guaranteed list of instructions to follow which would, if obeyed, ensure that I was a Christlike woman. I still haven’t found that list (thankfully, I’ve learned that in Christ we are free from the bondage of such lists and laws!) but what I’ve found at every step of this journey toward being a Christlike woman is stories. And not just any stories. I’ve found a wealth of stories about women of faith from days gone by.

I want to share with you some of the stories about women of faith who have captured my heart and imagination over the years. 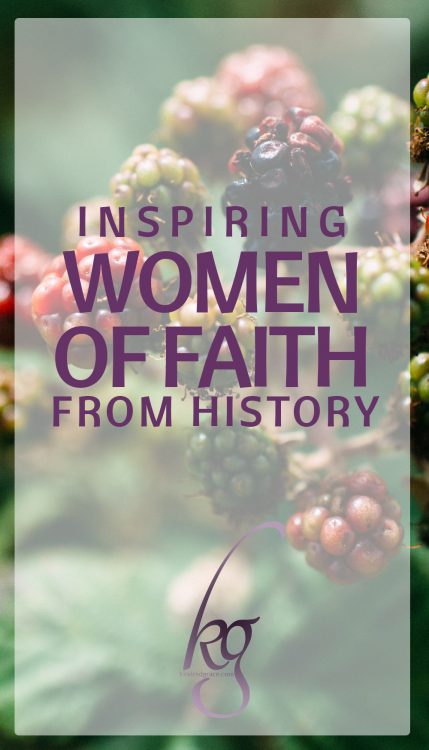 Women of Faith from 7th Century through 16th Century

Ethelburga was a Saxon princess in the kingdom of Ken in the south of what is now England. She was the daughter of a Christian queen and a pagan king who converted to Christianity during the English mission of Augustine. Ethelburga remained a faithful Christian when her parents died and her brother returned to the pagan ways of the Saxons. At his wish, she married Edwin, the strong, warrior King of Northumbria. She was determined not to lose her faith and took her priest, Paulinus, with her to the kingdom of Northumbria in the north of England. She steadfastly followed her Christian ways in her new home.

Edwin’s life was threatened by an enemy, but saved by a loyal and courageous servant. He recognised that it was Ethelburga’s Christian God who had saved his life, so he became a Christian. Edwin was baptised and from that day he made it his mission to ensure that his kingdom was a Christian realm. It was said that a mother and her baby could walk from sea to sea without any threat of danger. All too soon, however, raiders from the sea threatened the peace and Edwin was killed in battle. His kingdom plunged back into the pagan ways of the Saxons while Ethelburga and her children fled to safety in Kent where she established a convent under the spiritual guidance of Paulinus.

In her lifetime, however, Northumbria began to turn back to Christianity – through the mission of Aidan – and the light of faith which her witness lit has never been extinguished since.

In the Words of Those Who Knew Her:

“For we have been informed … that your highness, also, having received the wonderful sacrament of the Christian faith, continually excels in the performance of works pious and acceptable to God.”

Clare was a devoted Christian who was committed to living for Christ. In her era, women living for Christ in an extraordinarily committed way usually entered convents, where nuns lived simply and prayed fervently. As a teenager, therefore, Clare refused an offer of marriage and ran away from home to become a nun. The convent was stormed by her family but she clung to the altar in the church and refused to leave. She symbolically exchanged the jewelled girdle of a noblewoman for the rope belt of a nun. Life in the convent was hard but Clare was said to glow with a heavenly light after times of prayer and she was honoured for serving everyone she met: the sick and poor as well as her fellow nuns. She was often consulted by the church leaders of her generation and she showed bravery and trust in God in times of danger.

“Don’t be afraid. Trust in Jesus.” 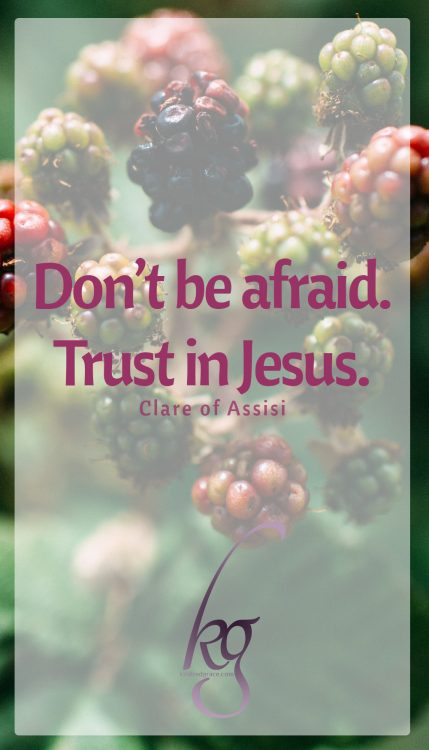 Katherine was sent to be educated in a convent at the age of five. By the age of eight, she was preparing to become a nun and she lived as such, within the walls of a convent, until she was in her twenties. Somehow, in spite of being sheltered from such things, Katherine heard of the reformation that Martin Luther was leading. She was intrigued by the spiritual dynamic of the reformation: that faith was by sola gratia (grace alone). Together with some other young nuns, Katherine escaped from the convent, the girls hiding in empty fish barrels. The girls sought the help and protection of Luther and he found husbands and homes for all of them … except Katherine! Eventually, Katherine and Luther married and had six children, raising four others, as well. Katherine also encouraged (sometimes advised, and occasionally, admonished) her husband in his work, hosted his guests and students, and managed their home and farm. Luther referred to Katherine, affectionately, as “my rib” — referencing the creation story about Eve being formed from one of Adam’s ribs (Genesis 2:21-22). At a time when the Protestant church was emerging from the Catholic church, Katherine created a new kind of Christian family by marrying a churchman (who would have been single in the Catholic church) and creating a home and family which offered him grace and strength.

“I will stick to Christ as a burr to cloth.”

Jane was the daughter of noble parents with royal blood. She was intelligent and learned to read and write – as well as speak – Latin, Greek, Hebrew, and Italian. She was said to prefer studying with her tutors to hunting and dancing with her family and friends. She was also a devoted Christian – and a convicted Protestant at a time when being Catholic or Protestant was a matter of life and death. When her cousin, King Edward of England, died, Jane was offered the throne of England, much to her dismay. She asked God for guidance and heard nothing so did as she was told. Nine days later her cousin, Princess Mary, claimed the throne and swept into London with an army. Jane was imprisoned in the Tower of London. Mary wanted to spare Jane’s life – in spite of her treason – but there was a problem: Mary was a Catholic and Jane was a Protestant and each of the cousins represented a threat to the safety of the other. Jane was urged to convert to Catholicism but refused and was therefore executed for her faith at the age of 16 or 17 years old.

“I ground my faith upon God’s word.” 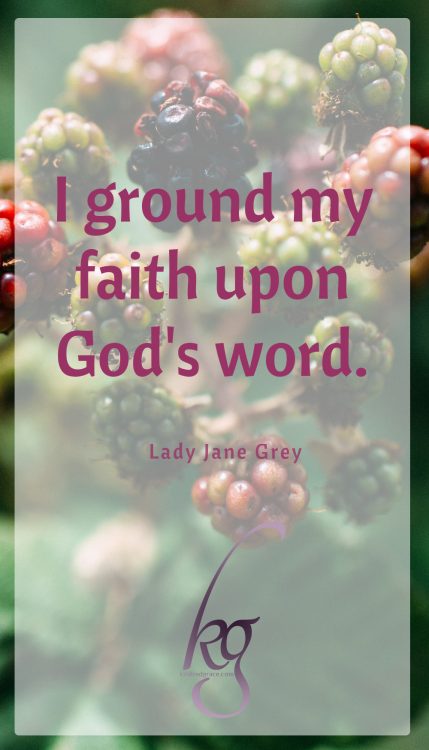 Pocahontas was the daughter of a Native American Indian chieftain. Tradition says that her father captured an English explorer – Captain John Smith – and sentenced him to death. Pocahontas begged for mercy and saved his life. She was thereafter a sign of peace between her tribe and the explorers. Some years later, however, Pocahontas was kidnapped and held to ransom by some English settlers. During this time, which must have been frightening and traumatic, Pocahontas became a Christian while learning English with Reverend Alexander Whitaker who was called “the Apostle of Virginia”. She chose a biblical name – Rebecca – when she was baptised and later she married an English man. She became a mother and travelled to England with her husband and son.

In the Words of Those Who Knew Her:

“She hazarded the beating out of her own brains to save mine.”

I’d love to hear about some of your heroes of the faith!

In the next post, I’m sharing stories of some more modern-day women of the faith.