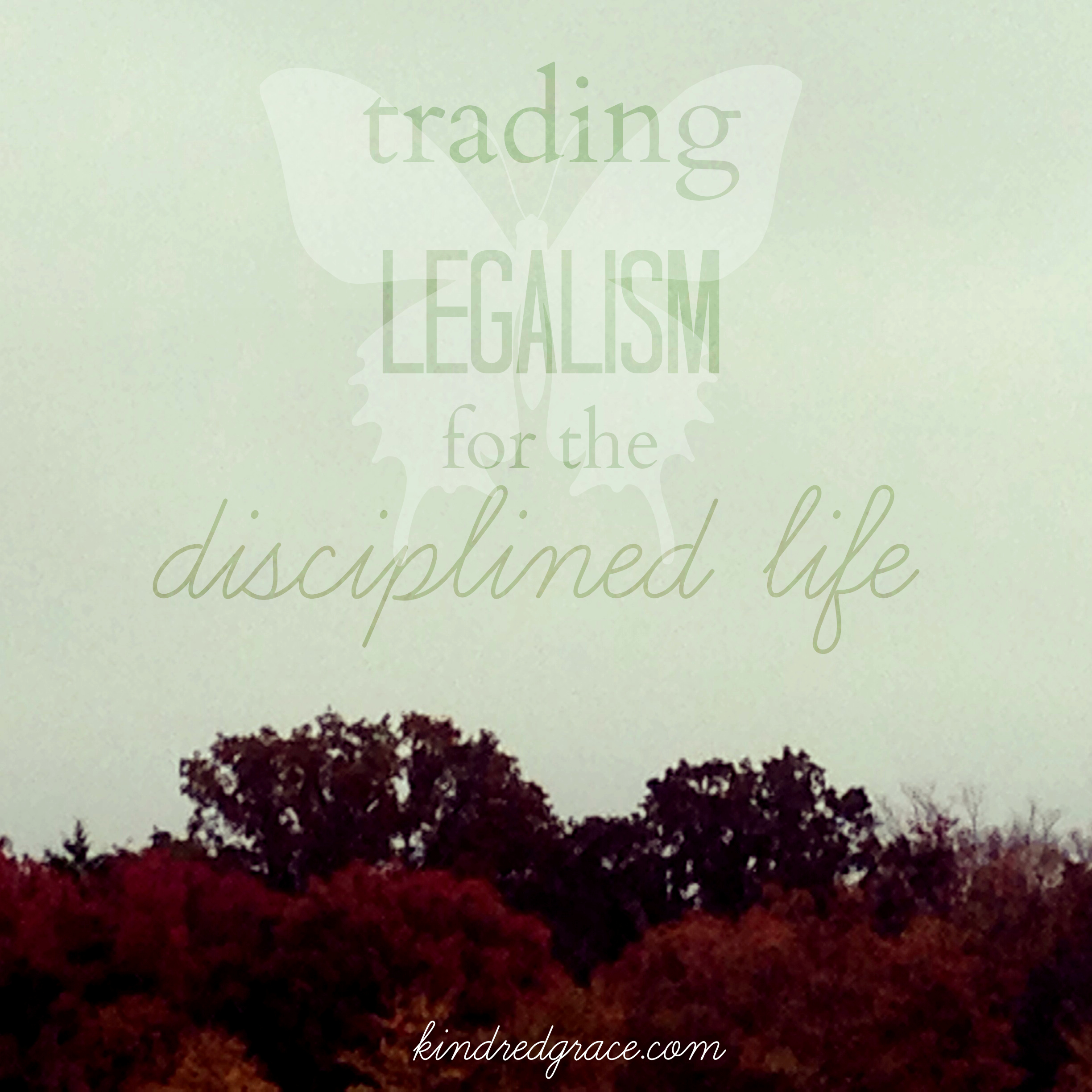 Once upon a time, I was a pretty legalistic teenage girl. I had read the books and the blogs and I was ready to “make a defense” against anyone who disagreed with me. There was only one way to educate your children, only one type of church to attend, only one dress code for modesty, only one way to find a mate and marry, only one type of mate to find. You get the idea. Though I never would’ve admitted these things (I thought myself to be pretty open-minded), deep down I believed them. 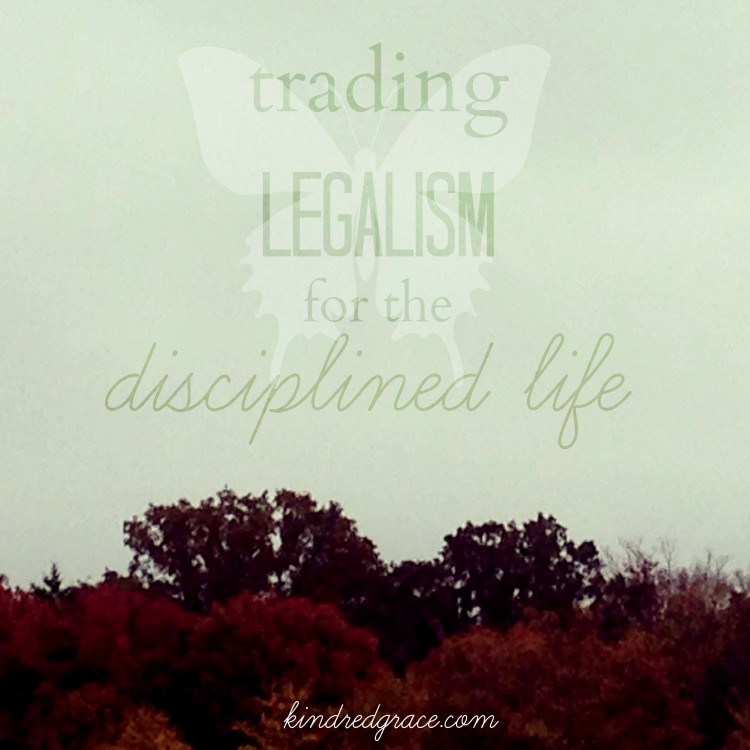 Thankfully, this was a fairly short phase in the grand scheme of things. Eventually, Jesus got a hold of my heart and gently reminded me that I’m not the center the universe. He is. And He isn’t nearly so opinionated about curriculum and hemlines as I had imagined. I embraced my freedom in Christ and threw out the old, cold bathwater of legalism. I stopped blogging about what you should and shouldn’t wear/watch/do/believe. I started blogging about what God was teaching me, personally. But with the bathwater, I think I may have tossed the baby. If the baby can represent my common sense, for the sake of this post.

Mercifully, I didn’t make many of the kind of mistakes that have lasting consequences. I know a lot of Christians around my age who take the commandments from the Bible and live as far from them as “legally possible.” Claiming to be “Biblical” because they’re not exactly breaking the rules, but basically living like the world and keeping their heart far from a God who convicts and challenges. We cannot twist the Scriptures to support our lifestyle of choice when our God looks at the heart.

But I became a spiritual slacker because, yes, there is such a thing. My salvation was secure and, on the outside, I kept a pretty clean face. On the inside, I wasn’t all that bad, either. I didn’t do those bad things other people were doing, so I was good enough. If I could just coast along with my teenage faith and avoid any major obstacles, I’d be golden.

Prayer would happen “as the Spirit led.” Scripture reading was minimally important, as I’d already read the entire thing multiple times. Meditation was for people with more free time. Tithing was too complicated with my inconsistent work schedule. And for those moments when I missed the mark, I had grace!

After all, I wasn’t going to be a legalist! No more scheduled “quiet times” for this sage! No more Bible studies written by sinful people. No more cheesy worship music. No more “how to” books from people who want to police your life. This is a bit of an exaggeration, but it’s the attitude I had, until not too long ago.

Turns out, I had tossed the baby out with the bathwater in a big way. Instead of this “free” faith giving me a better relationship with God, I found myself drifting into a place of doubt and weakness. It seemed I could either have religion or spirituality, but never both. And that’s when God allowed the rug to be pulled out from under me. 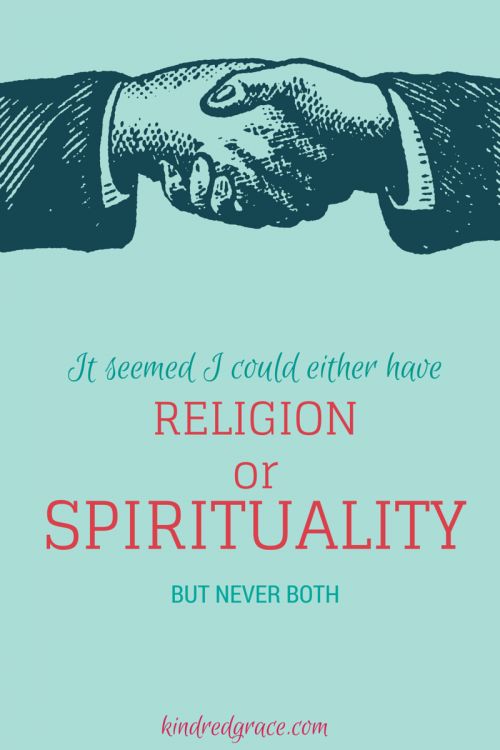 What happens when you fail to rely on God? You rely on something else. Though I had tossed the books and blogs that told me what to do into the dumpster labeled “legalism,” I quickly collected a new committee of advisors. They were more free-thinking, philosophical and sound-minded. I felt could trust them, and so I did. I would read their books and blogs voraciously, eating up every last interpretation of scripture, searching high and low for instruction. I wanted this new group to be different than the last, but I wanted them to treat me the same way. I wanted them to tell me what to do, but they often left me with more questions than I had come in with.

I found myself leaving their counsel feeling uneasy and unhappy. Where was I supposed to get wisdom in this life? The first group shoved their opinions down my throat, while this new group seemed so hesitant to offend that I felt my questions were often coming back void. Wasn’t there something between “my way or the highway” and “follow your own heart”? I slammed my books–and my laptop–shut in deep frustration.

However, the Bible–that book I had felt almost too qualified to revisit–refuses to return void (Isaiah 55:11). If I had been truly studying it, I would’ve remembered verses like Psalm 146:3-4, which say, “Put not your trust in princes, nor in the son of man, in whom there is no help. His breath goeth forth, he returneth to his earth; in that very day his thoughts perish.” How can something be so piercingly beautiful? The words, “that very day his thoughts perish” makes my heart ache. I was trusting in the thoughts of men, thoughts that will go into the grave with the men who think them.

I should’ve also remembered James 1:5. “If any of you lack wisdom, let him ask of God, that giveth to all men liberally, and upbraideth not; and it shall be given him.” After rushing from one faucet to another with my cupped hands, hoping for a drop of wisdom from this scholar or a drip of instruction from that sage, I finally followed the pipes to the source of all wisdom and good instruction. God Himself bestows wisdom on those who ask for it and He does so liberally.

You see, there is nothing stuffy or legalistic about our God. He is just and righteous, undeniably, but He is also lavish in love and liberal with grace. I learned, once more, to always put my trust in God and rely on Him for wisdom and direction because He is the only one who will never fail or leave me. Though as surely as He would never leave me–as the old song says, still I was “prone to wander”. 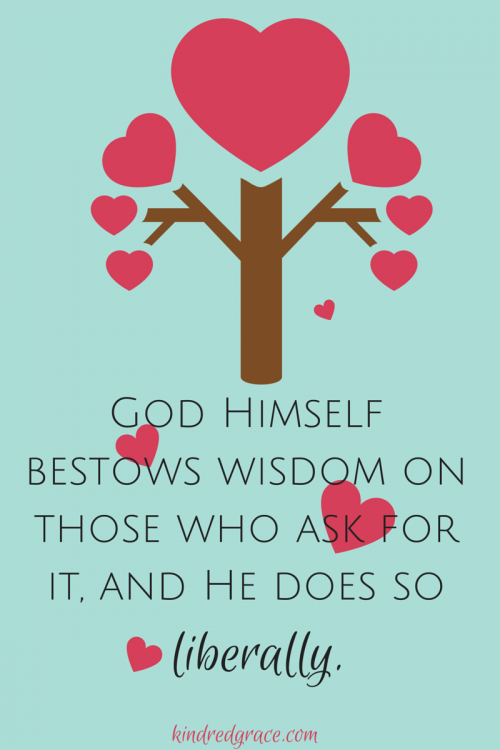 Now that I had my scholars and sages back in their place, I knew I had to consult with one more person. I turned to the Gospels to study Jesus’ life on earth. I had struggled first with legalism, then with liberality (an arrogant idea that I didn’t need to be disciplined to be spiritual), and now I wanted to be one thing and one thing only: more like Jesus Christ. What I discovered was more practical and applicable than I had ever hoped for.

The first thing I discovered was that Jesus was very much involved in traditional religion. He was dedicated in the temple as a baby (Luke 2:22-38) and, at the age of twelve, is found again in the temple, this time “sitting among the teachers, listening to them and asking them questions.” (Luke 2:46). Involvement in church and attention to those God has ordained to preach is essential. Not every teacher is to be trusted (the Bible tells us that not even miracles can prove someone is not a false teacher!) and we cannot put our full trust in any man or woman, no matter how sincere or Godly they may be, but there is a reason some are gifted with teaching. Jesus was also well-versed in scripture. God is omniscient, but Jesus did not use His heavenly power on earth, except when it was granted by the Father. His ability to accurately quote scripture must have been a testament to the time He spent listening to rabbis. Temple worship also included singing songs of praise and offering sacrifices.

The second thing I realized was that Jesus was not afraid of being influenced by others. Throughout the accounts of His life, we see Him associating with everyone from scribes, scholars, tax collectors, the wealthy and the poor, children and the elderly, the sick and the healthy, women and men. He was not afraid of being led astray or “tainted” by anyone, but gladly listened to and loved all.

Thirdly, Jesus was very serious about His personal relationship with the Father. This is almost paradoxical, seeing as Jesus was in fact God, but even Jesus needed prayer and time to mediate. Lots of time, apparently. In Mark 1:35 we see Jesus rising very early. “…While it was still dark, he departed and went out to a desolate place, and there he prayed.” Hebrews 5:7 gives us this picture of Jesus in Gethsemane: “In the days of his flesh, Jesus offered up prayers and supplications, with loud cries and tears, to him who was able to save him from death, and he was heard because of his reverence.” As a matter of fact, Jesus is recorded praying alone, praying aloud, praying before meals, before important decisions, before healing, for himself, for others, asking others to pray for him and teaching his disciples how to pray and why to pray!

There was only one thing for me to conclude: if Jesus was not exempt from these practices, and many others beside, who was I to say I didn’t need spiritual disciplines? To be legalistic is to police the lives of others. To be disciplined to is to put into practice the only kind of control God ever puts into our hands: self-control. Only you can know your true limits, so only you are qualified to draw the lines around your own life. You cannot tell a brother or sister in Christ (and certainly not a non-believer) to do “this or that” that isn’t outlined in scripture, but you can tell yourself that. You can tell yourself not to eat that, not to wear that, not to say that and you can actually be more free than ever by doing these things.

We live in a broken world, as you’ve heard it said. Christ-followers are swimming upstream and that is no passive task. Like salmon, we may end up at our destination, red with streaks of blood for all the painful work of going against the grain. Against the culture, against our nature. So do whatever it is you need to do to stay the course. Join a church. Ask for accountability. Put God on your to-do list. Read a book on prayer. Get a mentor. Set aside an hour to pray every morning. Start a journal. Turn off the distractions. Open your Bible, pen in hand. Whatever it is you need to do, begin today! 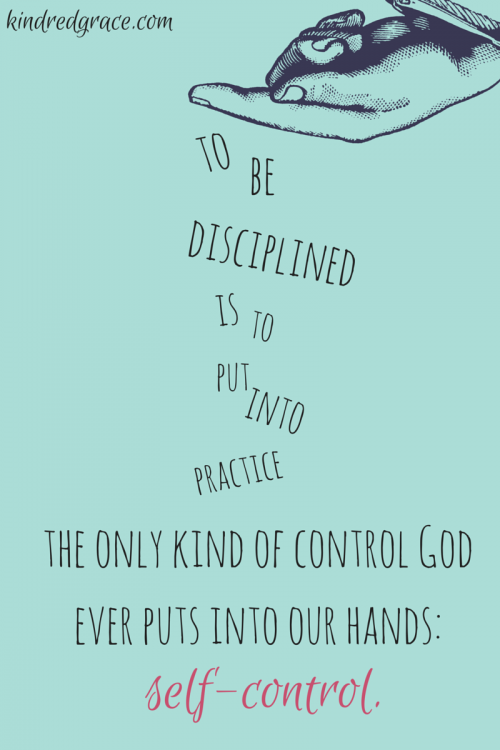 Note: I used the King James Version for the scriptures I referenced herein. I typically share out of the ESV or NIV, but, to symbolize a return of sorts to traditional religion, I thought it appropriate to quote the poetic translation of the past.