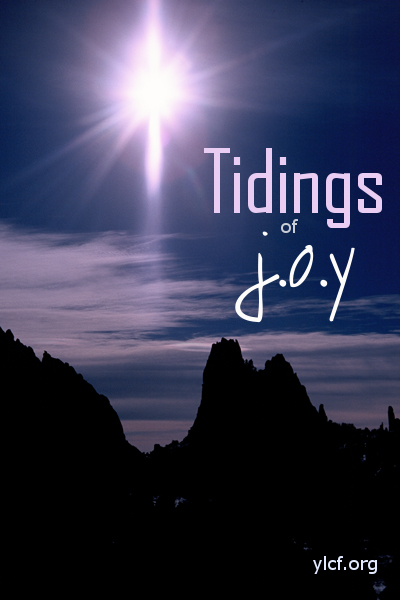 I read the words and imagine myself there. It thrills me.

“There were…shepherds abiding in the field,
keeping watch over their flock by night.
And, lo, the angel of the Lord came upon them,
and the glory of the Lord shone round about them: and they were sore afraid.
And the angel said unto them,
Fear not: for, behold, I bring you good tidings of great joy,
which shall be to all people.

For unto you is born this day in the city of David a Saviour,
which is Christ the Lord.
And this shall be a sign unto you;
Ye shall find the babe wrapped in swaddling clothes, lying in a manger.
And suddenly there was with the angel
a multitude of the heavenly host praising God,
and saying,
Glory to God in the highest, and on earth
peace, good will toward men.”

Those tidings of joy still echo through the ages. They come down through time to us. And my heart soars with every note of the Angels’ song as I imagine that Bethlehem night and as I think of these tidings of great joy.

For unto us a child is born,
unto us a son is given:
and the government shall be upon his shoulder:
and his name shall be called
Wonderful,
Counselor,
The mighty God,
The everlasting Father,
The Prince of Peace.

The shepherds left their sheep for the joy of welcoming  their LORD and Savior Jesus Christ. The wise men traveled far not knowing exactly where they were going, just following a star to honor Him. But for many, the tidings of great joy were lost in the hustle of yet another ordinary day.

This may well be the the busiest time of the year for many of us. The coming and going, the planning and the wrapping of gifts drown out the Silent Night and the Music. I think sometimes we live like the majority of the world did then. We live like we haven’t heard the tidings, and act like we don’t know the joy.  Perhaps it is because we’ve forgotten some of the strains of that angel song. Maybe we’ve forgotten a few of the words of the tidings.

Christmas isn’t about the gifts we give to each other. It isn’t about holly, Christmas parties and pretty trees. It is about knowing the great tidings and living every day like we really do.

Let’s just pause to listen to the song until  it echos in our hearts again. Today. Tomorrow. Next week, and all year long.

Let’s start living with more joy in our hearts every single day, because we know Him who was born so long ago  in Bethlehem.

Let’s keep our eye on the Reason for the Season. He was born, He lived. He died and now He lives. And He’s coming back soon.

For each one of us.

These are truly the tidings of greatest joy that have ever been told. Let’s celebrate them this year.

Living  with joy is one of the most beautiful things ever. Counting  joys is something that we should do all year, but on Twitter right now you can share some of the special joys of  this season by using the #100joys hash to tag your posts so others can share the joy this season. This 100 joys is hosted by Sarah Markley, so be sure to read her posts and the details over on her blog!

Chantel has loved good stories with real-life challenges and happy endings since she was a young child.

She is a country girl currently living in Small Town, USA, and carving out a little urban slice of country living down south. She and her husband seek to live their lives simply and joyfully and teach their two redheaded children to be intentional about their days.

Chantel has loved good stories with real-life challenges and happy endings since she was a young child.

She is a country girl currently living in Small Town, USA, and carving out a little urban slice of country living down south. She and her husband seek to live their lives simply and joyfully and teach their two redheaded children to be intentional about their days.