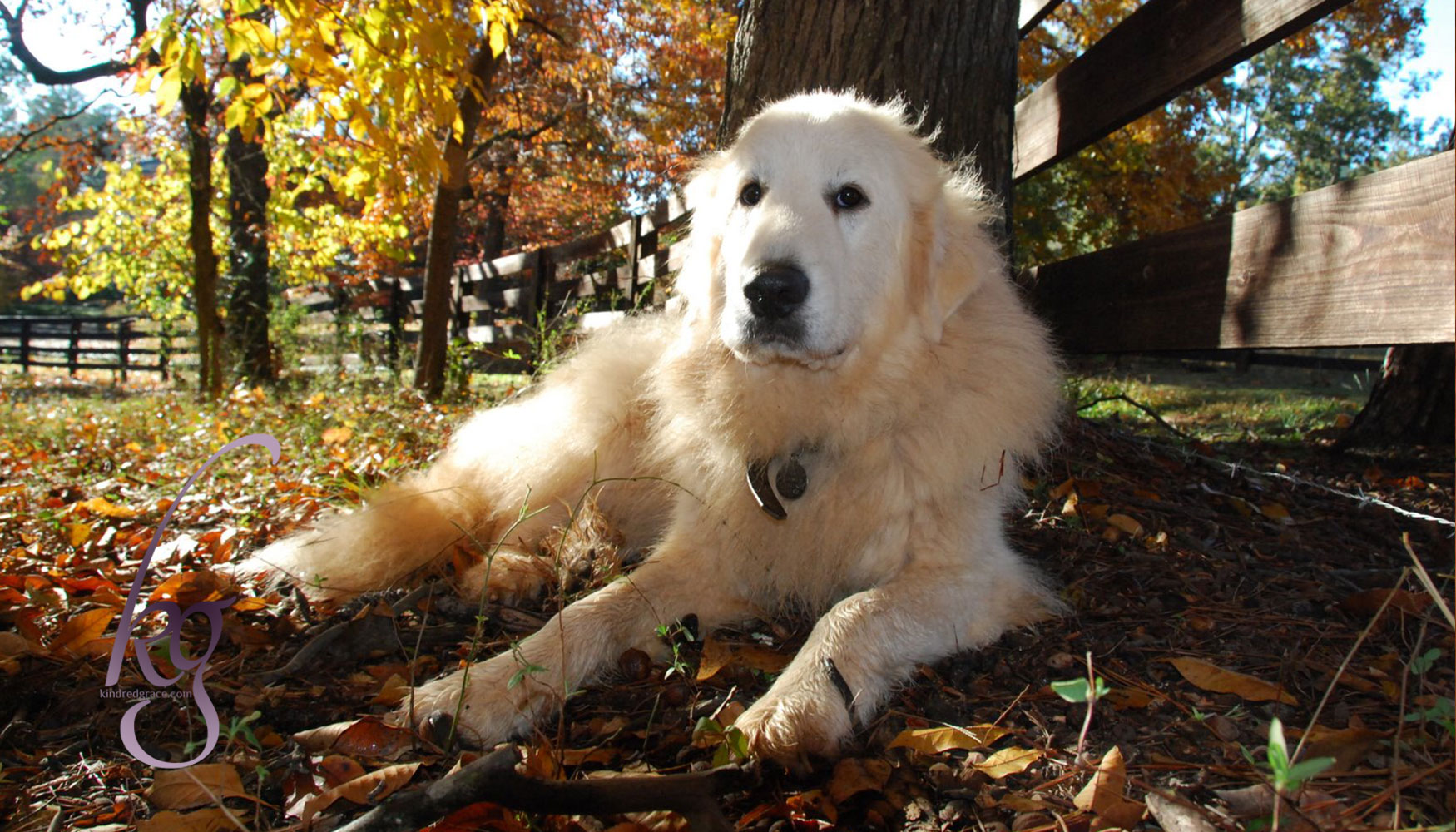 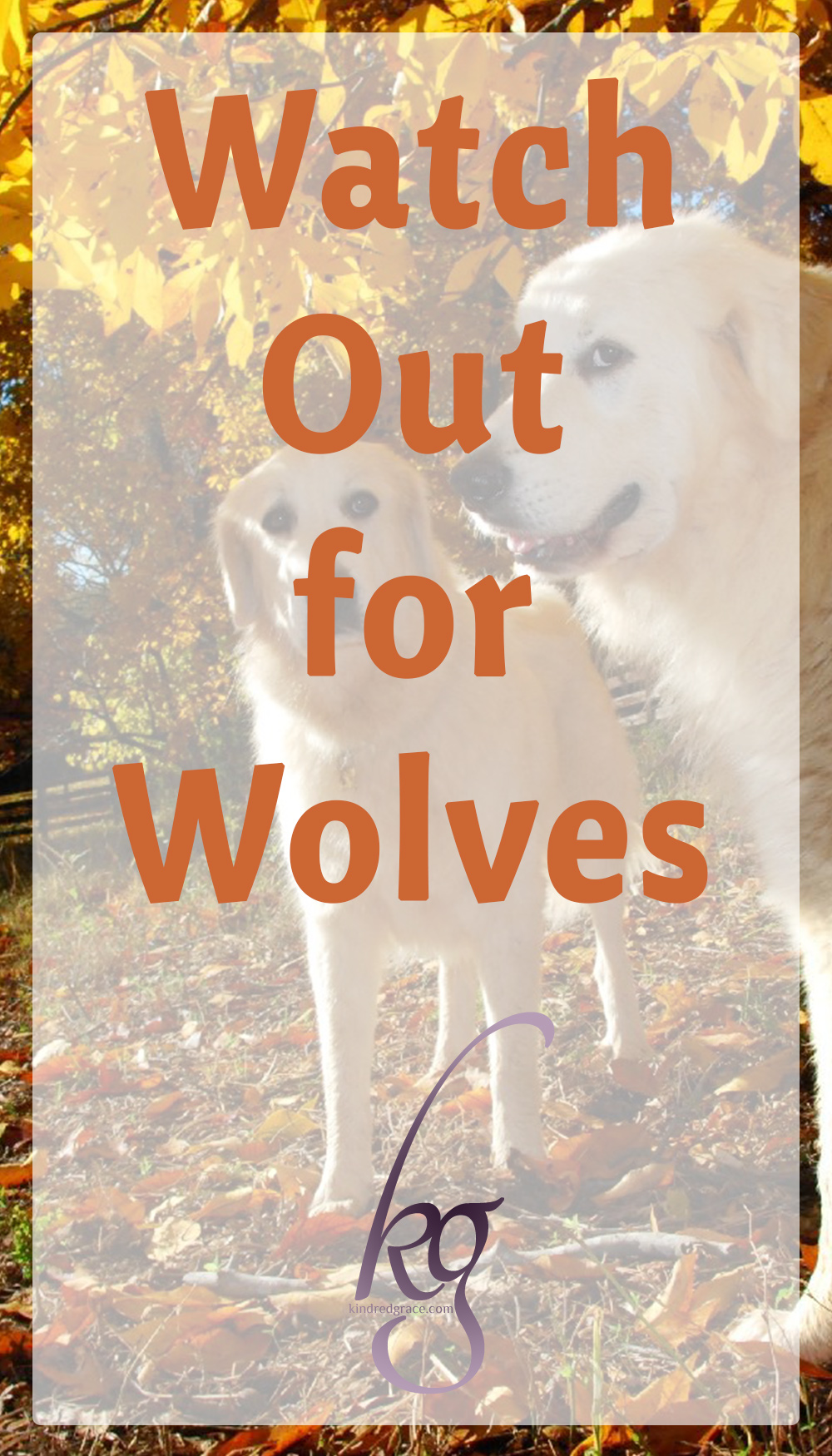 It’s no secret how much I love my sheep.

Needless to say, we have sturdy fences in place, which we inspect regularly, as vital to keep intruders out as to keep the sheep in. And I would never—not in a million years, not for love or money—ever consider letting them so much as out of the barn without their big fluffy white babysitters, Juno and Diana. These Great Pyrenees dogs are the guardian angels of my little flock, the stouthearted sentinels that are on duty round the clock, day in and day out. They patrol the fence lines in an unwearying round of duty, and often can been seen stretched out in the pasture, in a position of alert repose, with sheep and goats grazing peacefully around them. That is a sight to warm the heart, and invariably invokes a little prayer of thanksgiving from me, and an appeal for blessings on the heads of these beautiful girls of mine.

Juno and Diana can spot an intruder a mile off. A neighboring bark can startle them out of a nap—affectionately known around here as a Pyr-pile—in a heartbeat. Several times Diana has jumped the fence, off after an unknown marauder, only to return hours later (or the next day!) with a big, goofy grin on her otherwise aristocratic face and a lolling tongue, as much as to say, “How’d I do, Mom?”

I have something of the same feeling towards the girls of Kindred Grace as my guardian dogs do about their charges. I am very wary of the terrain they must traverse. From a perspective of years, I am all too acquainted with the dangers that may very well lay ahead, attractive lures and dainties that might prove charming enough to tempt them off the path that their Shepherd has ordained for them. And while I do not affect to the role of protection and guidance that only their Shepherd can provide, I do feel the burden of love to warn of possible threats.

To bark at a few marauders, if you’ll pardon the expression.

Many of you are at an age where you are considering marriage. Some of you are in a place to consider a specific person. You might be wondering just how sure you really can be of a potential mate. You may be so misty-eyed with love that your rose-colored glasses need a slight polishing. Whatever your unique position, I would like to offer a little heart-felt advice:

Never allow yourself to judge a man by appearances alone.

Things are not always what they seem. All that glitters is not gold.

One of the most horrifying scenes I have encountered in literature (at the risk of spoiling a rather decent book) is from Daphne DuMaurier’s Jamaica Inn, when the benighted young heroine realizes that the parish priest in whom she has been confiding all her suspicions and fears, the only one she feels safe in running to when real danger arises, is himself the root and originator of the evil she so much dreads. It gives me cold chills even as I write to remember the unveiling of that wolf in sheep’s clothing. Listen, ladies: there is a reason our Lord used that analogy. There is a reason that a wolf slipping in among a flock in disguise is so horrifying. It is the very ploy of the devil himself. And the devastation that can result is nothing less than tragic. 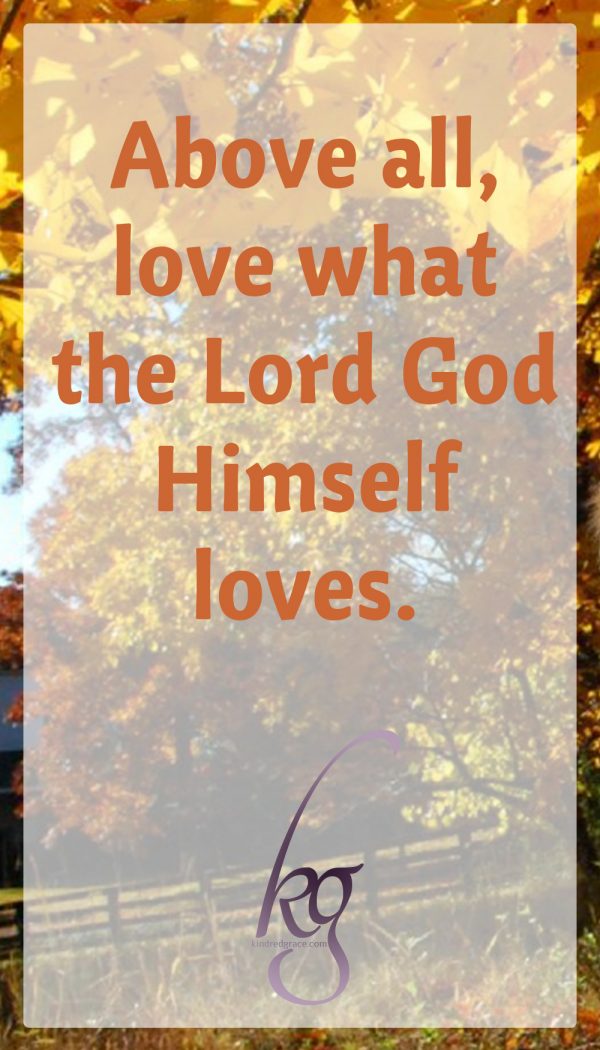 It is very easy for a man to talk the talk.

(It’s easy for a girl, too, but that is another post.) In this day and age, with the more obvious dangers highlighted on the screen, it is easy for a man to slip under the radar with a few good books under his belt and a nice arsenal of Scripture on his tongue. He may even have a resume of good works to tout—but believe me, if he’s touting them, that’s a serious red flag. So are high-flown loyalties to non-essential convictions. I’m telling you, the more particular a man is in obscure observances of remote principles, the more likely he’s “lost connection with the Head”, which is Christ. (Colossians 2: 18, 19)

That’s not to say that no man of genuine conviction deserves the opportunity to try and win your heart. But the proof of the pudding is revealed when the man and his works are held up under the blinding scrutiny of the Word of God.

I don’t see a lot about good looks and dashing demeanors in this list. Though it’s not exhaustive, I think it safe to say there’s nothing there—or in any other Biblical accounting of true godliness—that points to the worth of working for this ministry or that organization. Believe me, ladies—that’s not good enough. The stakes are too high for a pure-hearted woman of God in this world to settle for appearances alone. And the kind of girls that frequent this site are just the kind of girls that a wolf in sheep’s clothing would delight to devour. I’m not saying this to scare you or to make the marriage terrain appear even more impossible to navigate than it is. Far from it. For when you learn to look upon the heart, when you train and saturate yourself with the ideal of the good, and safeguard those ideals with the wisdom of parents, the insight of godly, and admittedly less cow-eyed, friends, and the ultimate perception of the Word, you can walk this mine field without fear.

I asked the Lord to bring me the godliest man He could find.

Like many young ladies in a similar situation, when I was about 18, I made a list of the things I would like in a spouse. Very reasonable, indispensable things, which I will not bore you or betray my trivialness with. But five years later, after some little experience and a lot of observation, I made another list. It had one item on it. I asked the Lord to bring me the godliest man He could find. A man who aimed to be like Jesus, humble, manly in meekness, devoted to God body and soul. With tears in my eyes, I want to tell you that He did just that. And in an extra effervescence of His love for me, He went back to those sweet little things I had asked for in my naivety and He threw them in as well. And more—so much more that my husband overshot my ideals much as a full-blown rose garden does a picture of a rose in a magazine.

The outward credentials I observed in the man that would one day be my husband did not come from the man himself.

They came from everyone that knew him—from the playful ribs of his roommates to the affectionate admiration of life-long friends. They came from the genuine love I sensed in him while watching him minister the love of Christ in a way that would have seemed easy had it not been for the cost he had obviously paid of his whole life. They were presented to me in the way that he responded to my family and my friends, to his family, to children and to animals (don’t laugh—surely a man’s treatment of the ‘least of these’, the ones most vulnerable to mistreatment and most unable to reciprocate in purely human terms, sheds a light on the real instincts of his heart that might not otherwise be seen).

Literature and life alike are scattered with histories of men and women who failed to recognize the mate of genuine worth until it was too late.

So many angels of light masquerade as the real deal, it can be baffling to a young woman—particularly a young woman whose affections are already engaged—to distinguish the counterfeit from the genuine. But romance is not a game, much as the standards of this world would like to convince you otherwise, and the things that might be somewhat niggling before you marry will inflate into giants of intolerability under the magnified intimacy of daily life together. You must be courageous enough to demand not perfection, but a rigorous, relentless honesty, in your intended as well as in yourself. You must be willing to walk away if the man’s professions don’t match up to what you know to be true of the character of the Christ-like.

For at the end of the day, the only one who is going to have to answer for your choices is…you.

If one of the sheep wanders off and gets tangled in a thicket, all Juno and Di can do is bark like crazy till their shepherd is alerted to the problem. Juno can’t administer an herbal drench, much as she would like to, based on the way she whinnies and whines outside of the stall if a sheep so much as coughs. Only the shepherd can do that. The inexorable barking the breed is known for might seem excessive, if not downright annoying to the uninitiated (or to the neighbors). But my sheep have recognized it as their safety. One of the loveliest sights I have witnessed in this shepherding adventure is the way that the animals all scurry to be near the dogs when a threat is perceived. They flock together, for ages of instinct have taught them that it is the sheep alone that is in danger. 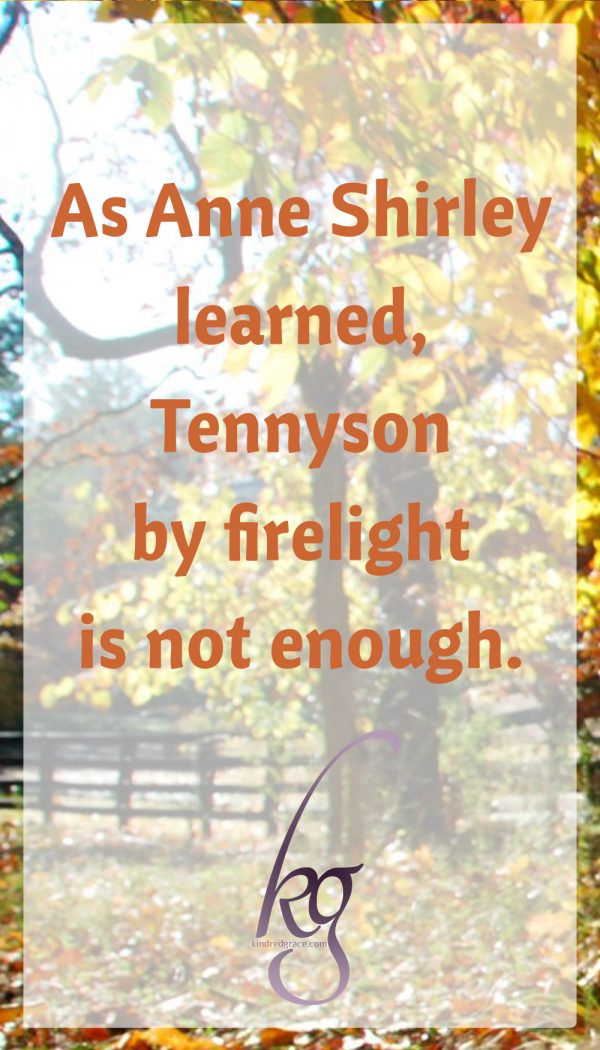 As Anne Shirley learned, Tennyson by firelight is not enough.

Neither are glib quotations of Scripture. Neither is a degree from a Bible college or a record of ‘high standards’. It is much easier to accrue a list of approved ‘spiritual’ credentials than it is to get up every day and try to live as Jesus would. Beware of the man that has not learned to control his feelings, his tongue, his hands. Treat the concerns of those who love you best and most disinterestedly with respectful consideration. Haunt the Throne Room with your prayers for wisdom. And be willing to walk in the wisdom revealed.

Above all, love what the Lord God Himself loves: 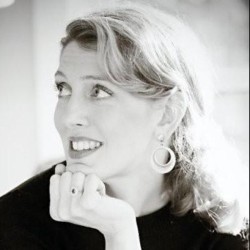