Once upon a time in the land of the glass hearts, there lived a young girl. This girl, as all the girls did, carried with her a heart.

While she was young it was kept safely on the nightstand by her bed and every night she would look at it and smile. It was so perfect; pure, clear, everything a beautiful heart was suppose to be.

Eventually the time came that her parents gave her the heart to carry with her always.

“It will break if you aren’t gentle with it,” her father reminded her.

And she was. She kept it cradled softly in her hand as she wandered through life.

When she was still a young girl, no longer a small child yet not yet a woman, it happened. She was sitting there, her heart in her hand, and he walked by.

It wasn’t on purpose!

It just happened that neither of them were paying attention and when he passed, it fell, swiftly, with a slight “whoosh!” and hit the pavement with a bump. The girl was horrified. The boy never noticed. He had only passed her, after all, and had someplace to be.

The girl fell to her knees next to the heart. It was still in one piece but cracks were beginning to show. Picking it up carefully, she held it gently in both hands. She looked around and realized that no one saw. Not a single person had any idea that her heart was broken. 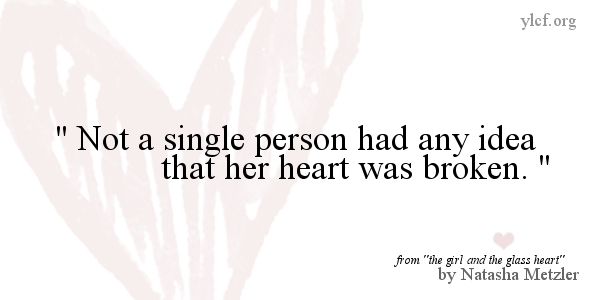 That night she went home, the heart hidden in her hands.

The family was very busy that evening. When the girl walked in people were bustling about and no one paid her much mind. Her mother stopped, for just a moment, to give her a kiss and ask about her day. Since she was so very busy, when the girl lifted her hands and began to show the broken heart, all she saw was a glimpse of perfect glass and so she said, “What a wonderful idea, my daughter, to keep your heart hidden so carefully with two hands! Now it will never get broken.”

The girl went back to her room and sat on her bed, staring at the broken heart. She looked at it carefully. The cracks were very real but she realized that if she held it together with both hands, one could not see the cracks at all. In fact, it still looked like it had before. Perfect.

She thought of her mother’s words and felt a tear fall. It would be horrible to hurt her mother by showing her the broken heart. So, in that moment she made a decision and with both hands cradled around the no-longer-perfect heart, she continued through life.

The years passed and the girl was successful. No one had any idea that her heart was no longer whole. Everyone who knew her thought that she had kept it safely hidden in her hands to keep it from breaking. They couldn’t know that she kept it hidden to keep it from falling apart.

The problem with this is that no one really knew what her heart looked like. All they ever saw was the tiniest glimpse whenever she felt safe enough to lift her hands a bit. But it wasn’t enough to really see what it looked like, only enough to show a bit of perfect, clear glass.

She couldn’t do much, with both hands being occupied, so she kept mostly to herself. When she did do things, everyone thought she was wonderful because she was so very careful and never was seen dropping her heart or letting others hold it like many of the girls her age. Mothers would tell their daughters, “Look, see how careful she is! You must be like that. Your heart is meant to be treasured. Follow her example.”

Whenever she heard the mothers, the girl would smile. She felt relief. This was, of course, the best way to handle everything.

After awhile she forgot that her heart was even broken. It just stayed so nice in her hands and the only time she looked at it was when she was showing others, so all she ever saw was the perfect part.

Somewhere, during this time, the girl met a man. He was known as the Heart-Healer. A more wonderful man was impossible to find. He was loving and caring, kind and compassionate, and he healed. Oh, did he heal! That was his business. In the land of glass hearts, there were many broken ones, and this man would fix them.

The girl became friends with him because her parents were. He would come over for dinner, many a night. He would spend whole days with just her family. Talking, sharing, laughing. The girl knew he healed hearts, so it is a wonder that she never showed him hers. The reason, of course, was that by the time she knew who he was, she had forgotten that her heart was broken. She did so many things with him. She let him closer than she ever did anyone else. He was her love. But her heart stayed hidden.

When she became a woman he began asking her. “Please, show me your heart.” She would laugh and lift her hands just a bit, enough to show a perfect clear glimpse of glass. He would smile and kiss her forehead as she began talking about something else.

Time after time, he would ask, and she would laugh and show him a bit more. Never enough to remember that her heart wasn’t perfect; just enough to show the parts that were.

Then it happened. One night, they were lying outside on the grass, staring at the stars. He sat up slightly, leaned over her and said again, “My darling, please, show me your heart.”

She looked at him and whispered, “There is nothing to show.”

But he said, “You are my love. I need to see your heart.”

Her hands were shaking but she opened them and to her horror the heart fell apart. Tears streamed down her cheeks as she suddenly remember that her heart was in pieces. “It’s broken,” was all she could say as she stared at the glass shards that had left scars on the palms of her hands where the edges had ripped into her skin when she had gripped the shattered pieces so tightly.

The Heart-Healer took her hands in his and began to kiss the cuts and scars. “My beautiful one,” was all he said.

He began to laugh. “Yes, my love, it is broken. But I am the healer of hearts.” He took the heart carefully from her hands and she glimpsed the scars on his own. 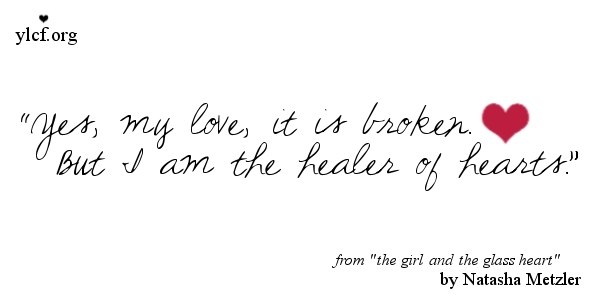 After awhile, assured of his faithfulness and ability, she fell asleep and did not waken until morning.

When she opened her eyes, he set the heart carefully back in her hands. She took a breath and looked. She stared. It was indeed a heart again, but it was in shattered pieces all melded back together. “But,” she gasped, “It’s not perfect. I thought you were going to heal it.”

The Heart-Healer smiled at her softly, “Look again.”

She looked back at her hands and just then a glimmer of light hit the heart. Usually when light would hit one of the glass hearts it would go straight through, but with this heart, the light danced across everything around it.

“I am more than just the Heart-Healer,” the man told her, “I am also the Heart-Maker. This,” he pointed towards her shimmering heart, “is what my hearts are meant to look like.”

“But, only in brokenness can it truly be whole.” He reached down and pulled out, for her to see, his own heart. It was glass, just like hers, and it was in shattered pieces, just like hers. 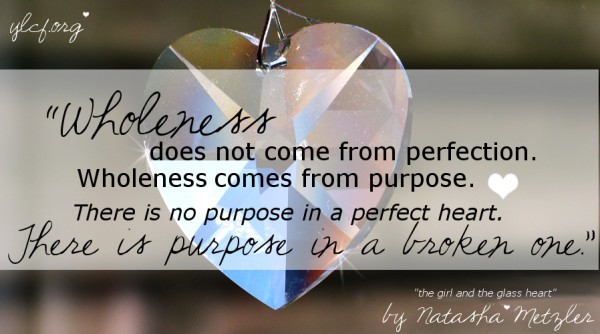