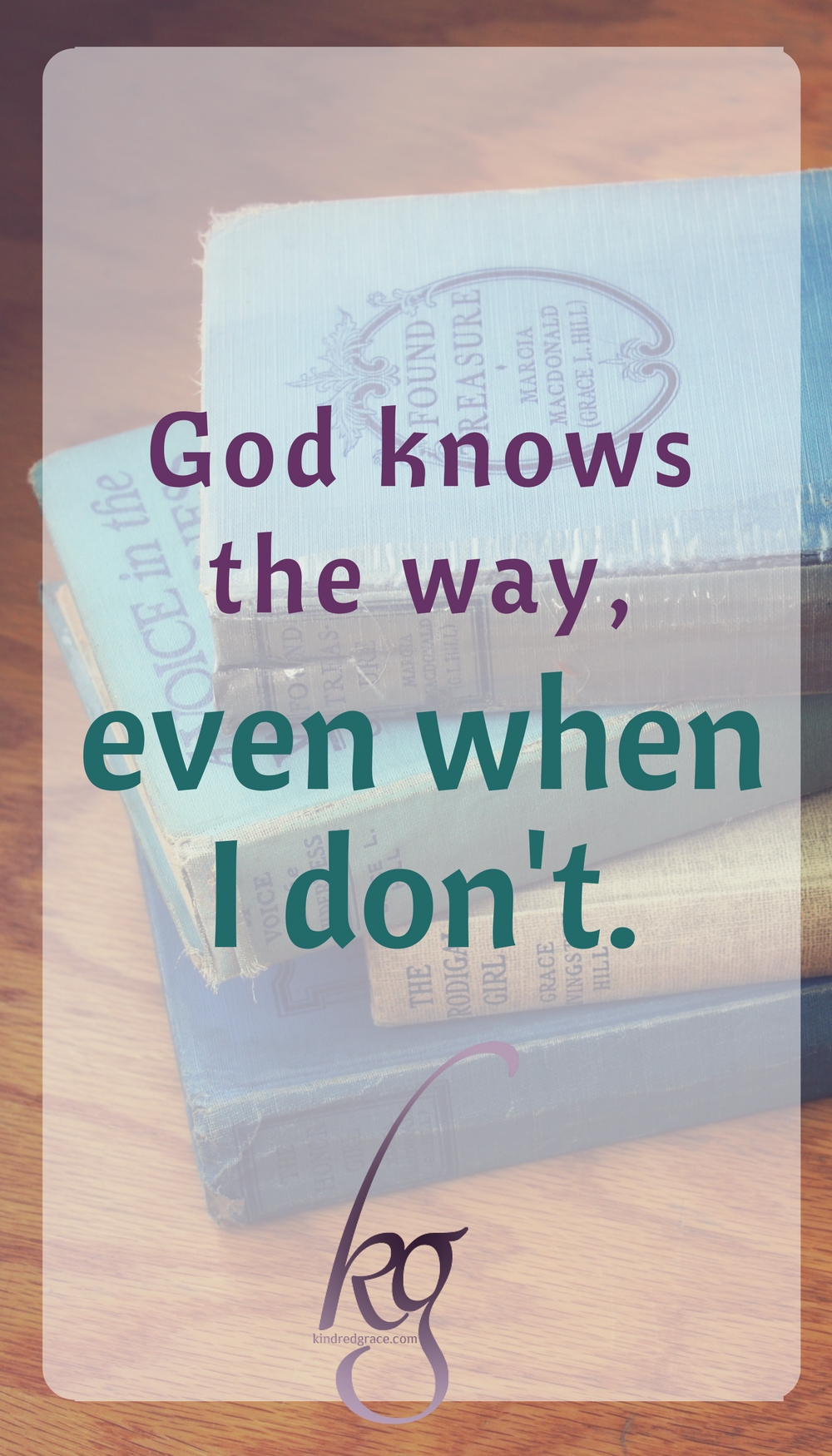 The year I turned twelve years old we moved into the upstairs of my grandparent’s house in Northern New York.

Until this point my family had been living in far off Homer, Alaska where my father taught at a Bible School. Our interactions with my mom’s parents included a handful of visits, many phone calls, and handwritten letters that flew back and forth. But this year things were different. We were going to live with my grandparents for a school year, I was going to public school for the first time in my life, and we were going to live in my mom’s hometown where everyone knew me–and I knew a handful of people.

Regardless of who I didn’t know in my new town, I was super excited to live near my grandmother. She was funny and sweet and her house smelled yummy and the books! Oh, my. Her house was covered with book shelves and they were all piled with books.

Now, you have to understand some things about my grandmother. She really was fun. My memories of her include her hunting through her wallet and finding all the dirtiest, most wrinkly dollar bills–exclaiming, “Ugh! Look at all this filthy lucre! I don’t want such dirty money in my purse!” Then she’d toss it on the ground and allow her giggling grandchildren to gather it up with glee.

She once spent a whole morning lamenting about her biscuits being too tough and started a long-standing tradition of making up poems about “Polly’s Biscuits”. We have a whole book full that include things like…

We all love Polly’s biscuits,
We bake them by the load,
‘Cuz the highway superintendent
Says they work to pave the road!

But one of the greatest things about my grandmother was the way she delighted in learning to know people.

She would listen with rapt attention to every story I wanted to tell and commented often about things she noticed about me. For a twelve-year-old who was trying to figure out who she was, this was life-changing.

And one of the things Grandma talked about was my love for books. It was perfect because she also loved books, so she’d put her arm around me and take me over to the shelves and show me her favorites.

This was when I was introduced to Grace Livingston Hill novels. Grandma enjoyed them and she taught me to enjoy them. I would get home from school, slam through my homework so I’d have free time, then go and peruse the Grace Livingston Hill shelf, looking for my next adventure. Grandma would glance up from where she was working, notice me, then start talking about this story or that story–speaking like they were old friends.

It was during one of those chats that I picked up Found Treasure, the book that would end up being one of my favorites and I would reread dozens of times. “That one really is a treasure,” Grandma told me. She was right. It told the story of a young girl who was pretty rough around the edges, and what happened when she committed herself to the Lord and sought to make her life reflect Philippians 4:8. It was a growing-up book and I was right in the middle of my growing-up year.

Within a short time, my family moved to Florida to help with a church plant, but before we left Grandma helped me start my own Grace Livingston Hill collection. Found Treasure was my first book. 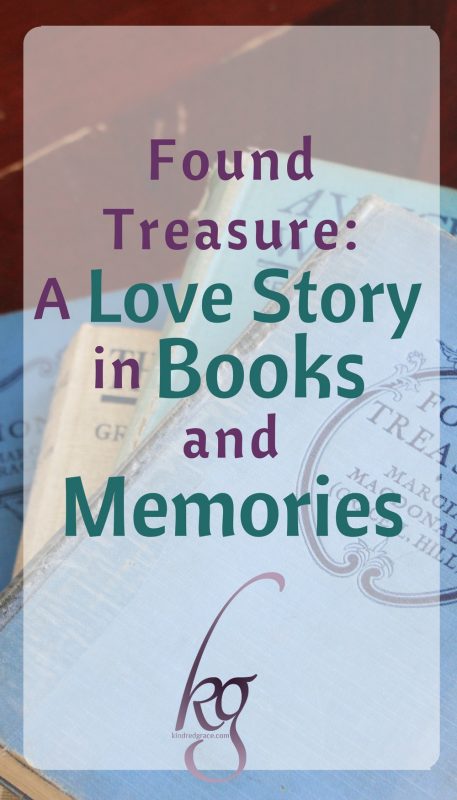 As the years passed, Grandma and Grandpa would come visit us every winter. She would often bring me new books for my collection. She was also ask me to create my own stories and talked about the books I would write one day with certainty.

One day she patted my arm with her soft hand and said, “I’ll put your books by my Grace Livingston Hills someday.”

When I was nineteen, my whole family moved back to New York. My parents bought a duplex and once again I was practically living with Grandma. We decided to combine our Grace Livingston Hill collections and found that together, it was complete.

I lived many places after that, doing mission work, then eventually marrying and moving to Tug Hill, near to where my grandparents farmed and raised their children.

Grandma lived with my parents until her death last year.

A few weeks ago, my mom showed up with boxes of books. “Grandma mentioned a few times that this collection needed to come to you when she was gone.”

It had been years since I’d read a Grace Livingston Hill. With parenting, farming, homeschooling…there just hadn’t been time. But I immediately picked up a book and started flipping through it.

I had forgotten. Grandma kept notes on everything. “I can’t remember a thing unless I write it down,” she often explained. And of course, how could one keep track of which Grace Livingston Hill book you’ve read when there are over a hundred stories?

And do you know what always stood out to her? Bible verses.

As I trailed a finger over the notes, a memory slammed into me.

I was eighteen years old, ready to head to college. My grandparents were visiting Florida and we were talking of them selling their New York home and moving to Florida with my parents. I found Grandma standing in the conservatory, by the bookshelf, with tears in her eyes.

Grandma didn’t cry often. She was compassionate, sweet, caring–but she wasn’t one for dramatic tears. So the fact that her eyes were glassy? It startled me. But then I found out that she wasn’t sad. Not at all.

“God is so good, Tasha,” she told me. “He uses the most random things to show me His love.”

She had been reading a Grace Livingston Hill to get her mind off the upcoming move. It was a big deal. She had lived in the same county for her whole life and the thought of leaving was hard. Most of her seven children and a large percentage of her grandchildren still lived in the same town. But Grandpa and her were getting older and they needed something to change. My mom, their youngest, had always wanted to care for them when they needed help. Moving to Florida made sense, but it was scary.

And then she stumbled upon a verse that was tucked into the story. Isaiah 42:16:

“And I will bring the blind by a way that they knew not; I will lead them in paths that they have not known: I will make darkness light before them, and crooked things straight. These things will I do unto them, and not forsake them.”

“It’s like God just stepped into the room and reminded me that He’s not blind of the future, like I am. He can see and straighten the road,” she explained. “And it overwhelmed me.”

They didn’t move to Florida. Instead, my whole family moved up to New York with them. Grandma just patted my arm when I hugged her as they moved into the duplex by my parents. “I guess God really did straighten out the path,” I said.

Her eyes sparkled. “I do like having all my family nearby,” she said. 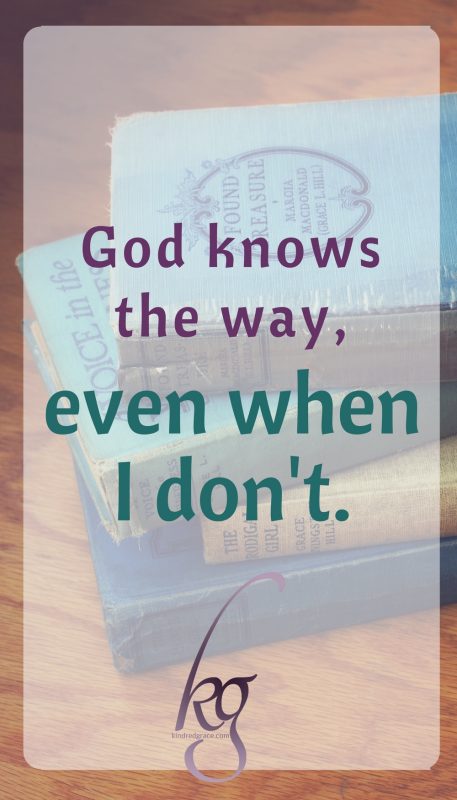 Since that afternoon, I’ve walked down some pretty dark and wandering roads. And Grandma’s reminder that day, with a Grace Livingston Hill book clenched in her hand, put a truth deep into me.

God knows the way, even when I don’t.

He knew the way through my single years, through my marriage, through years of infertility, and even now, as I parent older adopted children. He knows the way, even when I don’t.

His love is overwhelming.

And along with the love, comes this deep bubbling joy. Which, of course, was displayed right after Grandma announced her love for having family nearby.

She turned from me to tell Grandpa that she was very upset with him. She was remembering the time when she had been pestering him about any old girlfriends. They had been joking about boys who carve their initials with their girlfriends into a tree. “You didn’t do that, did you, Dick?” she had asked.

Grandpa had grinned at her. “No, no, Polly. I didn’t carve my initials with any other girl’s.”

Grandma nodded. “Well, that’s good. But if I ever go up to the sugar bush and find your initials with some other girl’s, you’ll be in trouble!”

Grandpa’s eyes sparked with humor and he leaned in, patting her arm, kissing her cheek. “Oh, Polly, you won’t find any such thing. They cut that tree down years ago.”

And as they finished reciting the memory, the whole kitchen irrupted in laughter.