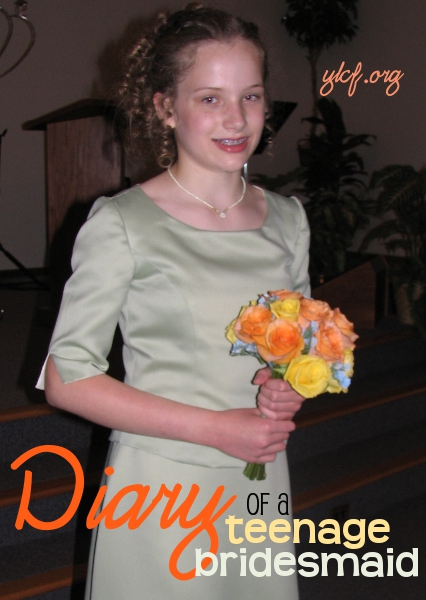 My first-ever makeup, a satiny green dress, and blonde ringlets (the result of eighty-eight overnight curlers) had suddenly transformed my ten-year-old self into the “grown-up” role of bridesmaid. As I stood on the platform steps, watching my only sister walk up the aisle to join her soon-to-be husband, the tears started creeping down my cheeks. During the months of their courtship, I had held hopes that I could somehow prevent this day from ever coming. How I planned to carry out this sabotage, I have no idea. Needless to say, by the day of the wedding I had reconciled myself to the fact that my sister would indeed be leaving our house forever.

As I watched my sister vow to love, honor, and cherish her husband, my tears continued to flow, covering my face with splotchy red dots. After the ceremony, countless guests came up to me and said that the sight of me made them cry in sympathy. But that day in 2006, I had no idea how much I would enjoy having a brother-in-law to tease, and later on, nieces and a nephew to cuddle.

Fast forward a few years. My brother, a college senior, called our family one August day to tell us about a sweet Southern girl who had captured his heart. Now slightly more accustomed to fact that relationships and marriages do happen in most people’s lives, I was ecstatic that my brother had finally found that special someone—someone with a Southern accent, no less!

The morning of their December wedding, a huge snowstorm threatened to delay the much-anticipated event. But thanks to a fleet of four-wheeled vehicles, the wedding did take place. Several of us bridesmaids wrapped paper towels around our bouquets to serve as last-minute handkerchiefs. But that day, my tears were more of joy than sorrow. Sure, I did realize that the next sibling in line to get married would be me, but due to a ten-year age gap, I wasn’t the least bit worried. Some tears did escape when I saw the look on my brother’s face when he saw his beautiful bride. The groomsman standing next to me gallantly pulled a handkerchief from his suit pocket and offered it to me—I silently refused by pointing to my paper towel. 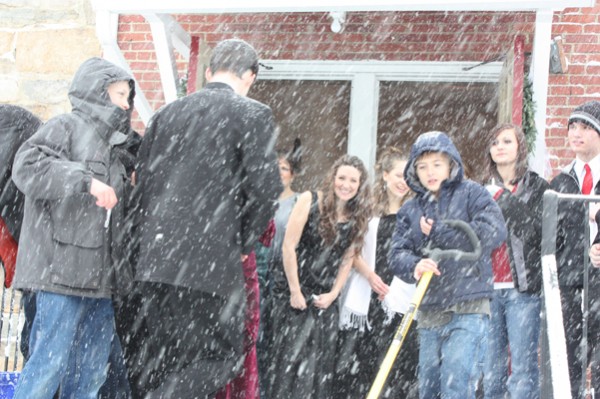 I was a bridesmaid three times by the age of fifteen. The prolific emails between one of my best friends and me were soon filled with mentions of a certain guy in her life. After months of prayer and many discussions, a courtship developed and a fall wedding was planned. Everything moved so quickly, I hardly had time to process the fact that we would enter a totally different season of friendship. The last overnight slumber party a few weeks before her wedding was both exciting and bittersweet, as we realized that all our dreamy conversations about weddings would soon be reality.

Her wedding day seemed surreal. The bridal party pictures quickly finished, we bridesmaids sat around waiting for the guests to arrive. Sitting on the floor in our black dresses, we played “Spoons” with Q-tips—carefully guarding our French nails, of course. When the time came to walk up the aisle, I could hardly believe my friend was actually the bride. I was well-prepared to cry, but few tears actually escaped. The kiss—their very first—was one of the sweetest I’ve ever seen. After the reception, they left in a shower of bubbles. My friend, gone with her husband. 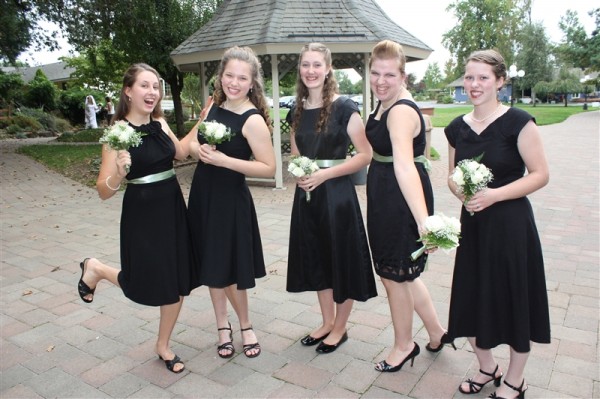 Three weddings in less than five years left me with more than beautiful dresses to hang in my closet, more than the ability to converse knowledgeably with brides-to-be, empathy for bridesmaids at every wedding I attend, and random advice about holding bouquets. My experience as a bridesmaid changed my Jane Austen view of love. I discovered that the wedding isn’t the end of a love story, it’s just the beginning. The marriage vows aren’t just a part of the wedding program—the words “for better and for worse” are a realistic commitment. As I’ve watched these three couples grow in their marriages, I find myself so thankful that they did take their vows literally. Job changes, crying babies, out-of-state moves—they’ve encountered a lot of reality only a few years into their lives together.

By being a bridesmaid, I’ve learned how short that 24-hour wedding day is compared to “the rest of your life”. Someday when I’m not the bridesmaid, but the bride, I’ll have a greater understanding of the seriousness of the marriage vows. And I will say those vows with confidence, knowing that God blesses a marriage that honors Him. I know, because I’ve seen it done before.

Jessica is a seventeen-year-old homeschool student who loves the life God has given her. She enjoys playing the harp and piano, learning languages, experimenting in the kitchen, public speaking, cross-stitching, hunting, watching football, reading long old books, and playing with kids — especially her nieces and nephew.