I met Cinderella when my parents took me and my baby sister to London. I was sure I was going to see The Queen of England. We went with another homeschool family, and their mother read me the story of Cinderella on the ride in the train.

I was enchanted, though now I’m not sure why. Maybe it was because Cinderella had brown eyes and brown hair, like mine. Most princesses in stories were blue-eyed and golden-haired and the discovery of a princess who looked “just like me” was exciting! Or maybe it was because Cinderella wore a pink dress to the ball; pink was my favourite colour. Or maybe … maybe, although I had a limited understanding of wicked stepmothers and ugly stepsisters and charming princes, it was because of the magic wand and the glass slippers and the happy ending.

Whatever it was, I identified with Cinderella somehow.  And there’s a sense in which I’ve been waiting for a fairy godmother and a pumpkin coach – waiting for a moment of transformation and a way to meet a prince – since I was four years old.

But this is the real world; I don’t believe in fairy godmothers and pumpkin coaches. Some girls never marry. Maybe there isn’t a prince for me out there “somewhere”. I know I’m not entitled to love and marriage!

But then I remember that God created me and knew me before I was born. That He put a little bit of eternity in my heart. That, someday, He’s coming for me and all His people here on earth. 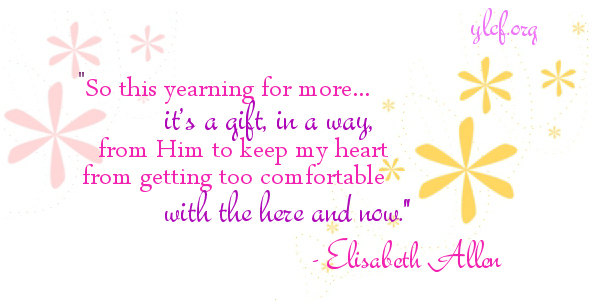 Cinderella wasn’t real, but there are other women who were real – as real as I am – who also had a yearning for more. God was their God as well as my God. He disturbed their hearts, He asked them to keep their hearts close to His heart, He asked them to chase Him with all their hearts. There were no fairy godmothers and pumpkin coaches in their lives. I’m not sure that their princes would have won any prizes for charm, being dwellers in the desert, physical workers, farmers and shepherds and carpenters who had beards and big, rough hands and wore robes and sandals.

God surprises me all the time – and He surprised them too.

God doesn’t promise to give all women babies or, even, to give all women husbands. He promises that He has a plan for our lives and He asks us to believe that He is faithful. And He shows us, in the lives of the women of the Bible, that He is able, at any moment, to step into the midst of our lives and surprise us in wonderful ways.  So wherever you are in life, remember that although Cinderella is just a fairy tale, God is as real (or more real!) than the world in which we live and He is “the God of Surprises”.

Oh … and The Queen? There was a state visit and Buckingham Palace was out of sight between crowds of people lining The Mall to watch The Queen and her guests as they went past in a state carriage. My family and I joined the crowds, my father lifted me up on his shoulders, I waved … and I really did see The Queen! God cares for our hearts. Nothing is impossible to Him. And He loves to surprise us when we’re least expecting it … 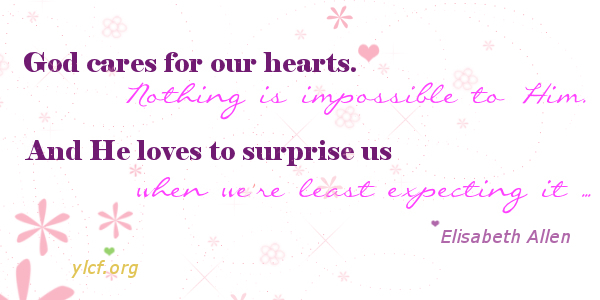