As I was reading and praying through your feedback to the recent survey here on YLCF, my heart alternately rejoiced and broke over your prayer requests and your stories. Thank you for sharing!  As one single to another, I too have known what it’s like to wonder if you’ll ever find love. As you shared your stories, I’d like to share a little bit of mine, in the hope that the Lord would encourage you no matter what season of singleness or relationship you find yourself in… 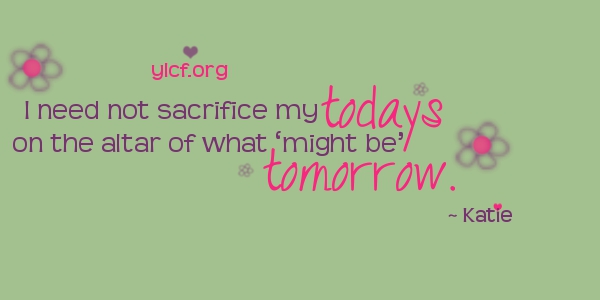 The word “fulfilled” is connotative of completeness, a bringing of something or someone to their full potential. However, “fulfilled” is rarely associated with singleness – to the point that a lot of people don’t believe it’s possible to be both single and fulfilled. Yet the Lord has been showing me the last few years that in Christ it is possible to be single and fulfilled: I can live for Him to my fullest potential whether married or single.

I was raised to be a wife and mom; all my dreams centered on that purpose. Yet today, I am still single. I’ve known love and brokenness.  I know what it feels like to watch dreams die. I’ve known pain and peace, longing and trust. I know the tension of being happy for my friends, as one after another their princes arrived, while coming to grips with the reality that – once again – my prince has yet to come.

As the years passed, I began to wonder if there was more to life than waiting for marriage and a family. Did the waiting have to always be filled with the intense pain of longing? What if I never marry – then what? Despair followed that thought.  I began spending my single years aimless and lost.

How shortsighted I was! My desire for a God-given, good thing had become an idol in my life. We are slaves to whatever masters us (2 Peter 2:19). I spent more time worrying about my relationships – or lack of them – than I did on thinking of how to glorify the Lord.  My singleness mastered me – not my Lord.

God in His grace took me on a journey showing me that there is more!  We were created to be helpmeets and desire relationships. But I need not sacrifice my todays on the altar of what ‘might be’ tomorrow.

The journey began with learning to glorify Him. It included discovering my passions and then using them to serve Him. My newfound desire to build a legacy for His glory is not limited by my relationship status. I’m still on this journey, but I am learning that it is possible to come to a place of still desiring marriage while living fulfilled as a single person.

Currently, I work fulltime, have my own place, and am actually enjoying this season! Is this what I thought my life would look like, or what I dreamed of when I was growing up? No. One of my deepest longings is still to be married and work alongside my husband in ministry someday. But the Lord has called me to something that doesn’t cancel out my wish to be married. In fact, what He’s called me to enhances and fulfills the desire I have to be married because it encompasses it: He has called me to glorify Him.

Perhaps, as C.S. Lewis once wrote, our desires to be married aren’t bad — they just aren’t big enough!

If there lurks in most modern minds the notion that to desire our own good and earnestly to hope for the enjoyment of it is a bad thing, I submit that this notion … is no part of the Christian faith. Indeed, if we consider the unblushing promises of reward and the staggering nature of the rewards promised in the Gospels, it would seem that Our Lord finds our desires, not too strong, but too weak. We are half-hearted creatures, fooling about with drink and sex and ambition when infinite joy is offered us, like an ignorant child who wants to go on making mud pies in a slum because he cannot imagine what is meant by the offer of a holiday at the sea. We are far too easily pleased.

-C.S. Lewis, The Weight of Glory