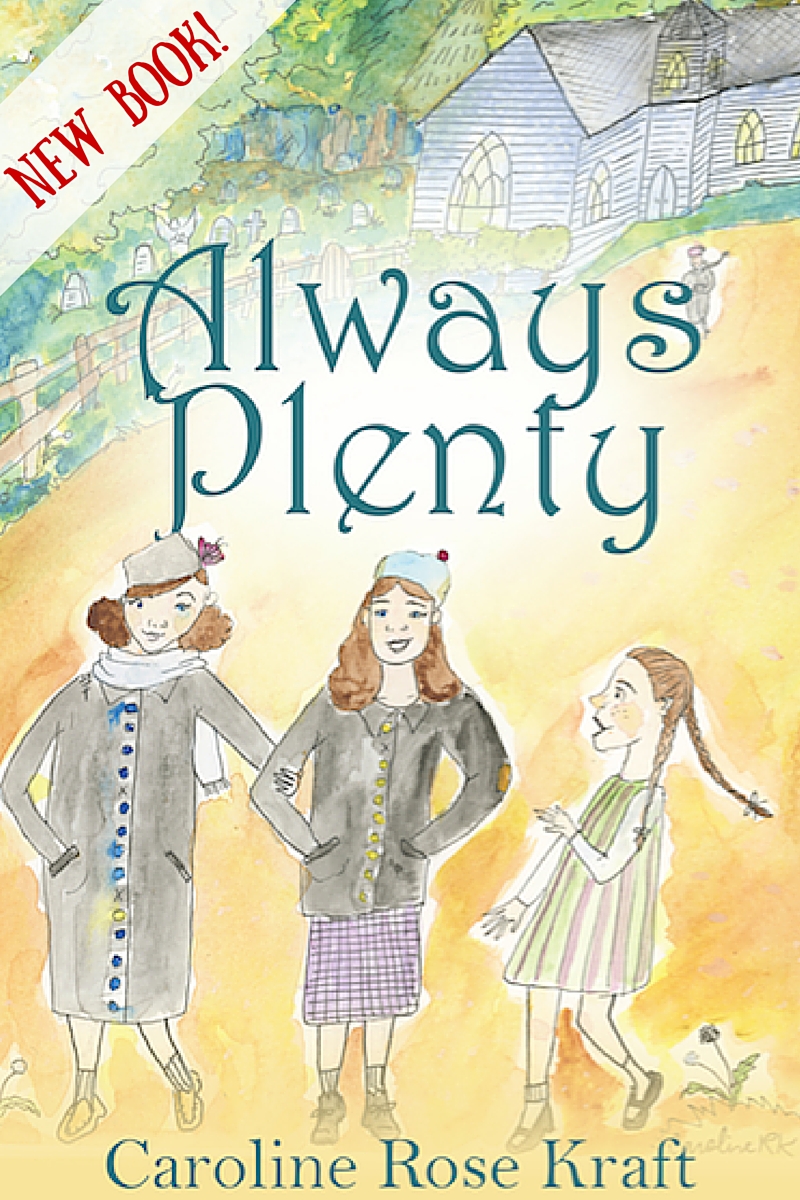 When I was a little girl, I lived in a green, three-story Victorian house which had come with a guest house. It was the only house on the market when my dad got the phone call. I can still see him at the phone in the kitchen with the long springy cord, hearing about the job for the first time. We grabbed our things and moved in on Christmas Eve to this big old house that was really two. The timing turned out be perfect and my grandparents moved into the smaller house. The walk to Mema’s house was just a jaunt down the path in the backyard. I spent many hours there having tea parties, sitting on the porch swing looking up at the Sycamore tree and writing stories.

Mema had a little yellow pad of sticky notes on her kitchen counter. How was I to know those were meant for taking down phone messages? I used her mechanical pencils to write stories on that pad of sticky notes, complete with teeny-tiny illustrations. I had only learned to read that year, and already I was scratching out stories of my own. It was as natural to me as anything ever was. And it was only the beginning.

We moved many more times, sometimes very far from family. I never stopped writing stories. My parents homeschooled us and I can never remember being required to write anything at all. But I wrote. Constantly. When I didn’t have a pad of paper, I wrote on my leg with my finger, invisible letters strung in invisible lines. I typed up stories on our big, fat computer in the living room. Skuffy the Skunk was written on a hundred different documents, shrunk on the bottom of the screen. How was I to know you could open them again and continue writing where you had left off? Skuffy was followed by Squeaky Corncob (a mouse) which was actually revised once I learned about a little thing called punctuation.

The middle-grade days graced me with a group of literary friends who called themselves “The Quill Club.” We wrote pass-along-stories which we exchanged in large, manilla envelopes after church. We called them “our children” and shared custody with each other. Those long and discombobulated novels taught me much about writing, and I still treasure them today. By fifteen, I had convinced my parents to let me start a blog under the alias of Everly Pleasant. By nineteen, I was eager to launch my career as a best-selling authoress.I had chosen long ago not to go to college, and it was almost a non-decision to be a writer. I was already a writer. I always had been. Though I still loved little books about skunks and mice, my heart was burning for truth. I attended a conference where I pitched a book to three major publishing companies. It was about the relationship between feminism and the church. The manuscript was heartfelt, but I had a lot to learn. After a period of consideration, all three publishers turned me down. 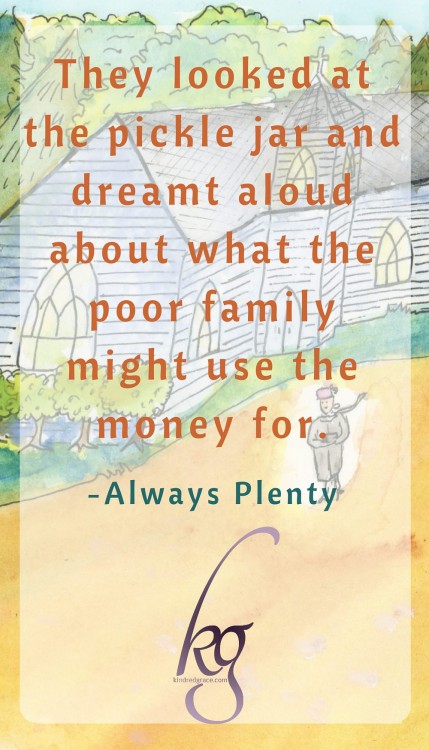 Around this time, I came across a true story on a blog. The story was written by a woman named Eddie. When she was just fourteen years old, she and her widowed mother and two sisters took it upon themselves to raise money for a poor family in their congregation. The story truly moved me. I needed to know what had become of Eddie and I needed to share her story with others. I did some research and found the church the Eddie attends. Though she was only fourteen in the story, Eddie would be in her eighties now, I realized. I wrote a letter to the church and they forwarded it to her home address. A short time later, I received a reply. Eddie was alive and well and happy to give me her blessing to turn the story into a children’s book! That was 2012.

The story continued to ruminate. I blogged a lot and tossed around the idea of writing many other books. Eventually, I realized Eddie’s story needed to come first. I opened up communication with Eddie again in 2015 and began working on the manuscript. During this time I prayed about who should illustrate it. I distinctly felt that I was supposed to do it myself. The book was supposed to be a labor of love, a sort of first fruits from my own personal harvest. Two sketchpads and many drafts later, I have a book. 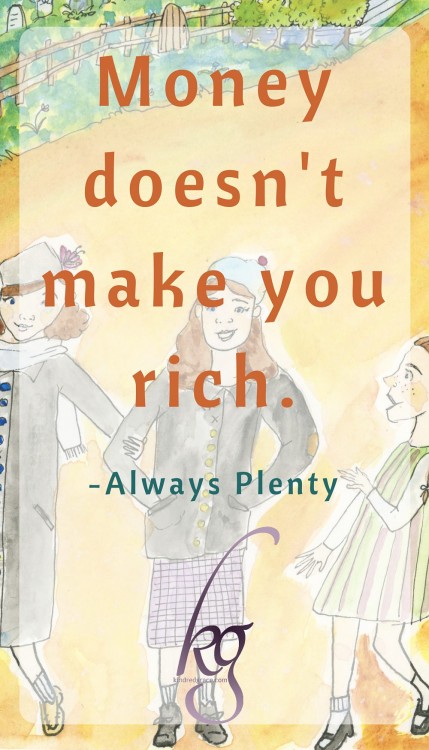 Most exciting of all, I was able to travel to Washington to talk to Eddie in person last October. We met at McDonald’s and visited over milkshakes and french fries. (Special thanks to Gretchen for hosting us and letting us use her car! We had such as sweet time with your family!) My sister Jeweliet took pictures and I scribbled notes. Eddie is an incredible person. Since the story took place, Eddie’s life has been full of other interesting stories! She and her husband knew each other a mere six days when they married. They then proceeded to have thirteen children (twelve through adoption) and many grand-children, great-grandchildren, and even great-great grandchildren! They also fostered seventy-seven children who were in need of a temporary home. I could truly write an entire series of books about this inspiring woman.

A labor of love it has certainly been, but I have had a lot of support. I am excited to announce that I am self-publishing Eddie’s story as Always Plenty. It is now available in paperback and on Amazon Kindle! Always Plenty is recommended for ages 8+ and is comprised of seven short chapters and seven pen-and-ink illustrations. It is a small, simple book about a small town and a small offering. It was written by a small blogger with small resources. But it’s a big story.

“This story has a life of its own!” Eddie told me at McDonald’s that day.  And it’s true, the story has been passed all around the world and even turned into a play at a large church. Eddie has been asked to speak at numerous conferences and has been contacted by many fans. But the essence of the story, that Jesus is truly all we need, still lives in Eddie today. And I hope it lives in the little book we created together, for you. 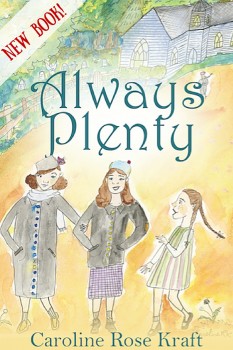 During the first month of sales, 50% of the proceeds of
Always Plenty (both Kindle and paperback versions) will be going to Project 143, a ministry which brings international orphans to host homes. Caroline was introduced to her youngest sister through Project143, and is always happy to answer any questions about hosting!