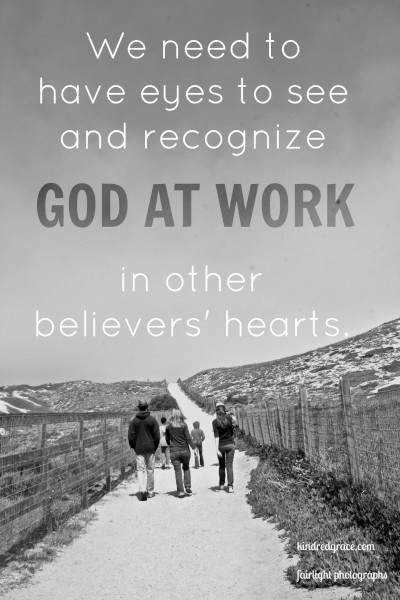 It’s a scenario I’ve witnessed too many times.

Let’s put it in more concrete terms: Christian A, “Audrey”, feels led by God to buy a motorcycle.  Christian B, “Beatrice”, disagrees with Audrey’s purchase.  Buying a motorcycle isn’t inherently sinful, but a couple months previous, Beatrice had been convicted to get rid of her motorcycle.  Because of this, Beatrice feels that means God must want everyone to get rid of their motorcycles and anyone who doesn’t, must be “in sin”.  Thinking this, Beatrice confronts Audrey about the sinfulness of her motorcycle purchase.  Audrey tries to explain how she felt that God was leading her to buy the motorcycle and how she had sought counsel from several other strong believers who had agreed that it seemed God was leading her to do so.  Beatrice, however, can’t see past the fact that God convicted her very differently and so accuses Audrey of things like “being blinded by her sin”, “not being led by the Spirit”, “being in rebellion”, etc.  The discussion may or may not continue from there, but unless Beatrice has a major change of heart, it won’t end well.

It may seem silly to think of all of that drama over something as trivial as a motorcycle, but if we stop for a moment, I’m guessing we can all think of similar scenarios we’ve witnessed or been a part of.  I know that for me, I’ve been on both sides — I’ve been both an Audrey, and sadly, a Beatrice.  And while this is not something I say lightly, I am pretty confident that situations like that grieve the heart of God. When Jesus prayed that His followers be one, just as He and the Father are One (John 17:21-23), I don’t think that’s what He had in mind.

I think part of our problem is that we have a God Whose creativity is so vastly beyond our comprehension, and we can’t handle it.  He has a plan for each of our lives, and because our God is so creative, each plan is unique and particularly suited to each person.  But honestly, I think a lot of us get a little miffed if someone else’s plan doesn’t look very similar to our own.  “But wait, if what God told her is so different than what He told me, does that mean her’s is better?!” In the scenario I described earlier,  God had amazing plans for both Audrey and Beatrice — each of them specifically suited to bring Him glory.  The only thing was…Audrey’s plan involved a motorcycle and Beatrice’s didn’t.  It sounds simple enough,  but so often such a difference can bring about so much unnecessary division if we don’t have eyes to see and recognize God at work in other believers’ hearts.

Please don’t get me wrong — I’m certainly not saying that we all just go our merry way, doing whatever we want.  I believe strongly in what Hebrews 3:13 tells us: “But exhort one another every day, as long as it is called ‘today’, that none of you may be hardened by the deceitfulness of sin.”  I believe that part of this includes “if anyone is caught in any transgression, you who are spiritual should restore him in a spirit of gentleness” (Galatians 6:1). But honestly, in many of the situations I’ve seen, the person being confronted isn’t actually sinning!  It’s just that God gives differing convictions to different believers about issues and situations that aren’t clearly outlined in Scripture.  And we need to be able to recognize that and, hopefully, rejoice in it.

Now, with Audrey and Beatrice, here’s what hopefully will happen: Audrey feels led by God to buy a motorcycle.  Beatrice, who a couple months ago felt like God was leading her to get rid of her motorcycle, recognizes that God has different plans for different believers’ lives and that often means differing convictions.   As Audrey’s sister in Christ, Beatrice exhorts her regarding possible sin issues that might come with purchasing a motorcycle (pride, materialism, etc.), but then rejoices with Audrey that she is following God’s leading .  Supporting each other in their differing paths, they can do so much more for God’s glory than if they were continually at odds because their paths didn’t look the same.

Peter turned and saw the disciple whom Jesus loved following them, the one who also had leaned back against him during the supper and had said, “Lord, who is it that is going to betray you?” When Peter saw him, he said to Jesus, “Lord, what about this man?” Jesus said to him, “If it is my will that he remain until I come, what is that to you? You follow me!” (John 21:20-22, emphasis mine)