The school buses in the back parking lot were what clued me in. I stared at their empty shells as I strode away from my truck and toward the center of campus. As I passed the pond, I realized what they were for.

A group of school children gathered. They must have been bussed in for some special event (was that music I heard coming from the university chapel?), and now they were taking a tour. Navy shirts and khaki shorts. Pigtails and gap-toothed grins.

I expected a quick peek from them as I passed, sort of like the ones I was stealing at them. I would have done that had I met a real life grown-up college girl when I was their age. Instead, they giggled with buddies and skipped across bricks. Three hung back from the group. The loners, quiet even with each other.

And the time machine hurtled backward…

When I was twelve, University was such a big bit of the future to me. I expected dorm life to be like a continual sleepover; my roommate and I would be best friends. What a picture I had in my mind then of what I would look like now. Certainly this curly mane of mine would have magically and mysteriously straightened out. I would be ever stylish, ever smiling, ever on the arm of a true Prince Charming, ever happy.  How little I knew then that, nine years later, I would be a curly girl with an eccentric sense of style, single, and oh-so-happy about the fact that twenty-one turned out to be so different from what I expected.

The truth is the difference between twelve and twenty-one is a lot bigger than trading in my Polly Pockets for pens, my collection of Babysitter Club books for historical fiction and classic texts. As I’ve grown in wisdom (but not in stature), I’ve come to realize that what at first seemed a vast cache of things-I’m-certain-of is truly a shrinking ship. What once promised to carry me off to foreign shores can now fit in a bottle, yet somehow, strangely enough, carries me farther than I ever dreamed possible. 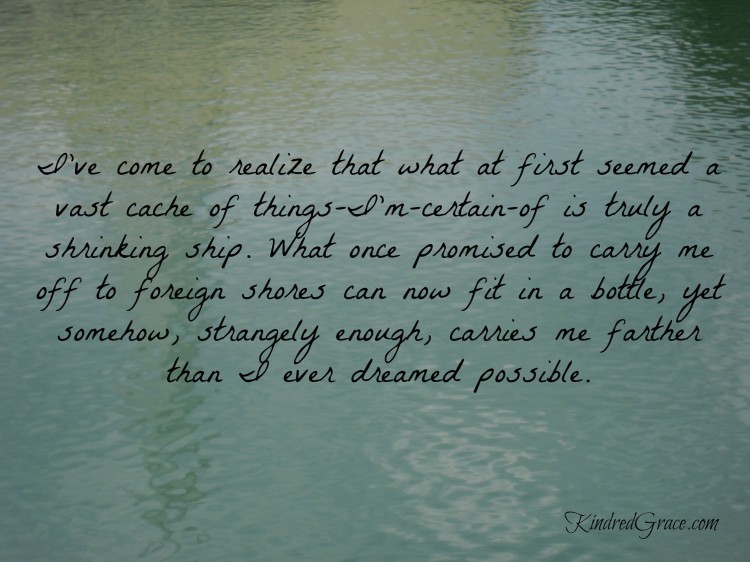 Recently a friend of mine asked me this:

I’m a junior in high school this year…I have to talk about things like SATs and scholarships and college and futures and all those things I put on my list of discussion topics to avoid.  (Right up there with a driver’s license. Ick.)  So, since you’re a college student, I have a question. How do you decide?  You know, what the next step is, where to go and what to do.  And how do you know it’s the right decision?

How do you know?

I knew at age twelve what university would hold…and then at sixteen, in one short summer, my expectations flipped on their head as I decided to not pursue a career as an optician, but instead embrace the calling of a more writerly degree.

I told my friend that I always knew I would go to University. “The figuring out what I wanted to do there? That was the hard part… But University is stretching and growing me and I feel like I am where God wants me to be right now.”

The most obvious difference between the girl I used to be at twelve and who I am now at twenty-one is that then I dreamed and imagined and wondered what life would be like now.

And now I’m living it. But I’m learning more and more every day that having “A Plan” is not all it’s chalked up to be. Having “A Plan” for who I wanted to be at twenty-one served my twelve-year-old self little, except to provide me with a staggering dichotomy between my imaginings then and my reality now.

That’s not to say I don’t advocate having a rough idea or daydreaming or considering the options. I’m not the same person I would have been had I not pondered working in an optometrist’s office, but I’m so very glad I decided to do the more difficult thing and follow the dream of a four-year degree of the Communication persuasion.

Life is so much different than I thought it would be. And I’m so glad.

I’m a University student, but I live at home and don’t have to deal with dorm life. I’m in love, but it’s with the Prince of Peace and not Prince Charming (yet). My life doesn’t exactly resemble the traditional fairy-tale. Rather, it’s so much sweeter. I’m so glad I didn’t allow my twelve-year-old self to dictate who I would become nine years down the road, because I’m sure I would be nowhere near happy if I had.