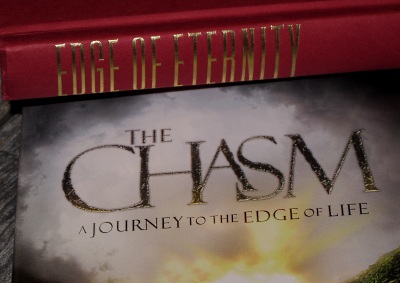 “You cannot cross the chasm without dying.  But if you stay here, you will also die.  If you walk the tree, you will die in a different way.  But the tree is the only way to life.  In one way, you’re already dead, though you’ve continued to exist.  You may choose to die and stay dead, or you may die and embrace life — but in either case you must die.  Nothing that has not died can be raised from the dead.”

-The Woodsman in The Chasm

When I opened Randy Alcorn‘s latest book, The Chasm: A Journey to the Edge of Life, I had some idea of what I’d find.  The Chasm, I knew, would be the gulf that separates us from God — and the bridge over it, the Cross.

But The Chasm is a lot more than just a little book expounding on that apt illustration.  It is a modern-day version of Pilgrim’s Progress in the style of Lewis, Tolkien, and Peretti.

As I read the last page, though, I found this detail: “Nick Seagrave’s full story — all that happened before and after he came to the Chasm — is told in the novel Edge of Eternity.”  I’d had the feeling I’d jumped in to the middle of a story, so that made sense.  I found a hardback version of the 1990’s Edge of Eternity on Paperback Swap and settled in to get the “rest of the story.”

What I discovered is that The Chasm is a very condensed version of Randy Alcorn’s original book Edge of Eternity.  The Chasm was stripped of personal details and some more involved aspects of the story, to make it more of every man’s, every pilgrim’s story.  Edge of Eternity is in depth and involved, and thus not exactly an easy ready or your average witnessing tool.  The Chasm is a little book, inexpensive to purchase, and includes new illustrations by Mike Biegel.

Honestly, neither The Chasm nor the entire Edge of Eternity were my style.  I was surprised, because Randy Alcorn’s detective trilogy numbers among my favorite books, and a recent read of Safely Home proved it to be on every Christian’s must-read list.  I have yet to read Lord Foulgrin’s Letters (a modern-day Screwtape Letters) or The Ishbane Conspiracy, but I’m guessing they are more in the style of The Chasm, too.

Maybe I’m just old-fashioned enough to like the original versions of most books better, instead of their modern-day re-tellings — even those by my favorite authors.  Maybe it just wasn’t my style.  But regardless, the message in The Chasm is one that can’t help but touch anyone who reads it, even if it’s not in your favorite genre.

As Nick Seagrave journeys through the roads of life, making choices and seeing how his decisions affect others, he eventually comes to The Chasm.  There, he helps crucify the Woodsman, literally pounding the nails in His feet with his own two hands.  But in the end, there comes the resurrection, and the Woodsman Himself bridges The Chasm so that Nick may cross it.

The journey does not end with the crossing of The Chasm, however.  Nick’s journey of service is just beginning — and now he travels in the company of fellow followers of the Woodsman, the Chasm Crosser.  He travels the red road towards Charis, a city on a hill that at times seems near, some times far away.

The parallels are obvious.  The Chasm is one book where we all know the ending — and we should be sharing the good news of that ending with everyone.  Maybe The Chasm will help you do just that.

I wasn’t sure what to say.

“I would have done it for you alone.”

I hung my head, feeling both unworthiness and awe.

“And if there was need, I would do it for you again.”

I looked at him and could only wonder why.

“But there is no need to ever do it again.  it is finished.  Paid in full.”

(Thanks to Waterbrook Multnomah’s Blogging for Books for the free review copy of this book!)

Raising Word Lovers at Mentoring Digital Wordsmiths
Gretchen is a farmer's wife and mommy to their four curly-haired children. Their home is filled with overflowing bookshelves. When she's not reading, Gretchen is blogging about books or coding WordPress websites for authors and bloggers.

Mentoring Digital Wordsmiths, Raising Word Lovers, Community Leader at @KindredGrace
WordPress Adds Option to Publish Entire Blog Posts as Twitter Threads. (But why would you?!) https://t.co/k4Zr9sO6dZ via @socialmedia2day - 3 days ago