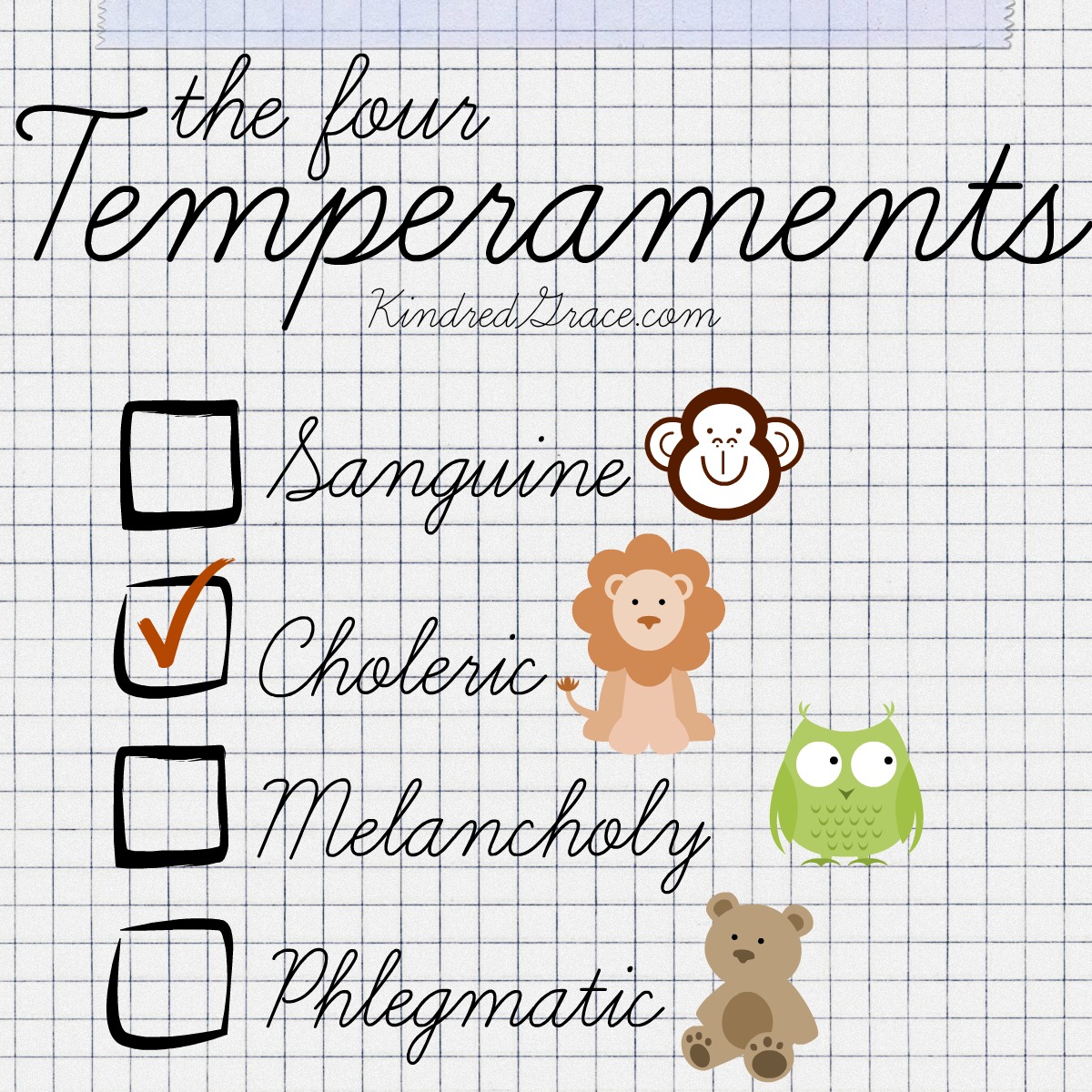 The concept of the four temperaments has been around since the days of the Greek physician Hippocrates (circa 400 BC). His philosophy was that our personality traits were based on the levels of our bodily fluids. He also recognized that while we were each unique, we all shared some of the same traits. These he dubbed the four humors: the Choleric, the Sanguine, the Phlegmatic, and the Melancholy.

Centuries later, we still recognize the common traits of four different temperaments in each of us. Speaker Florence Littauer described the four temperaments with alliteration: Powerful, Popular, Peaceful, and Perfect. Author Dr. Gary Smalley characterized them using animals: Lion, Otter, Golden Retriever, Beaver. But both agree that while some people are primarily one personality type, others are a combination of two or even three temperaments.

In fact, most temperament assessments (whether an official DISC assessment, the Color Code, or the free personality test from The Smalley Center) let you choose from a multitude of characteristics that may apply to each type. When your results are tallied, it’s easy to see which temperament you share the most traits with–or whether you are an even blend of two temperaments.

Following is a general overview of the four temperaments. Which one best describes you? Are you a mix of two types? (You can even pin your personality to Pinterest to share with friends!) 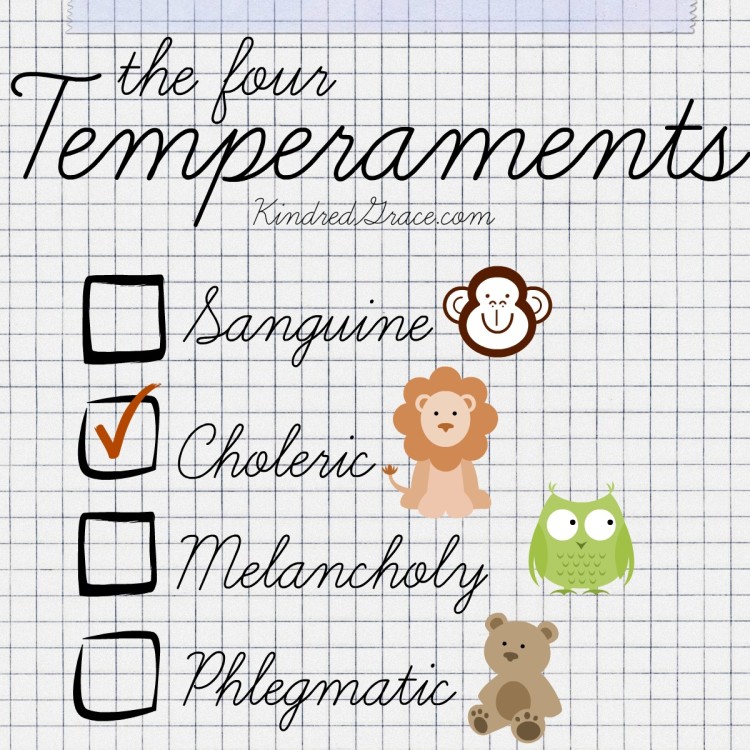 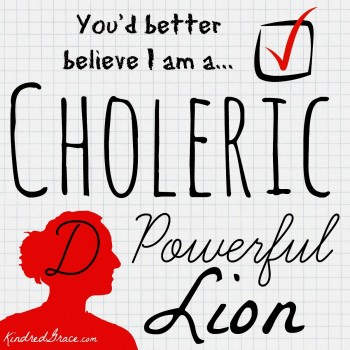 You’ll know the powerful Choleric by the way she walks into the room and takes charge of everything. She’s an extrovert who can intuitively size up a situation and delegate the tasks to get it done. You won’t catch her deliberating too long over details. She is a no-nonsense person who sets goals and believes in fairness. The Choleric is a practical, hard-working, self-sufficient, multi-tasker. This dogmatic person is a born leader, very keen, and capable of responsibility.  She will take a stand and stick to it, no matter what. She will not be influenced by what others think, but is also the least sensitive or sympathizing with others of the four temperaments.

Gary Smalley appropriately likens the choleric to a Lion. She is irritable and quick tempered, yet her driven personality makes her purposeful and productive.

“Such people don’t want to waste much time on trivial activity with no obvious results or converse with people who have nothing to say of any consequence. They accomplish more than any of the other personality types, can quickly assess what needs to be done, and are usually right.”
-Florence Littauer, Silver Boxes

I: The Popular Sanguine Otter 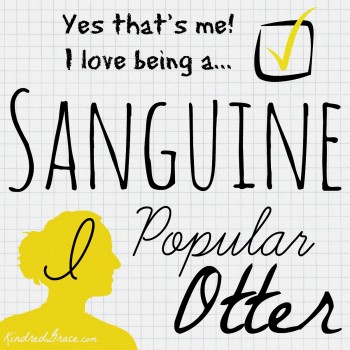 It’s easy to spot the popular Sanguine: she makes grand entrances and is the life of every party. She’s an extrovert who loves to tell funny stories and be the center of attention. She is warm and loving—she enjoys everything about life. It’s easy for something to warm her heart and cause an outburst of response. She is so cheerful and bubbly that she may even appear to be phony or come on too strong. She may speak before she thinks, but she is sincere and loving.

Gary Smalley describes the Sanguine as an Otter.  The Sanguine lives for the moment, and goes with the flow. In her energy and enthusiasm, she also is quickly distracted. She can tend to be selfish and irresponsible, but she’s so lovable that her friends can easily ignore her weaker tendencies.

“While the Sanguines want to have fun in life and appear to have no serious requirements for happiness, underneath they have a craving for approval…and will wilt into uselessness under negative comments. Given praise and encouragement the Sanguine will go to extremes to please you, for they want to be loved.”
-Florence Littauer in Your Personality Tree 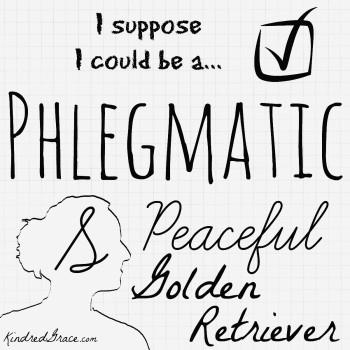 A Phlegmatic is a peaceful person—easy-going, happy-go-lucky, the phlegmatic wants to stay out of trouble and get along with everybody. She’s enjoyable to be around, but is laid back and doesn’t get too excited about much.  She is an introvert who loves peace and quiet. You won’t often find her in trouble with authority, because she will do anything to avoid fights and arguments. She has a naturally dry humor, and her wittiness keeps her companions laughing constantly.  She doesn’t get ruffled about much, and is the same consistent, caring person each time you see her.  She tends not to get too involved in things, and would rather sit back and watch the action—but when aroused, she is a competent and efficient worker.

The Phlegmatic is gracious and kind to all—she loves everybody and they all love her back. Gary Smalley likens the Phlegmatic’s traits to a Golden Retriever, sensitive and blending into any situation.

“These people fit into any situation, blend in with the wallpaper, and modify their personality to get along without conflict. Everyone loves the low-key nature of the inoffensive Phlegmatic… They do appreciate being noticed once in awhile, being included in conversations that they won’t push into on their own, and being told they are of value and that their opinion is respected.”
-Florence Littauer, Silver Boxes 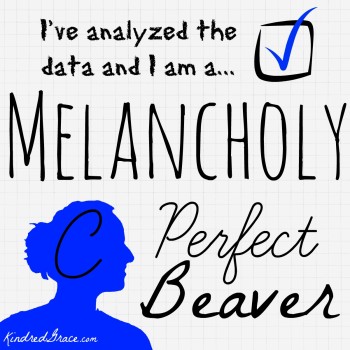 The Melancholy is the perfect person, who wants everything done properly and in order. She is systematic and labors over details. Typically an extreme introvert, she is reserved and prefers long, quiet conversations. She is constantly analyzing herself and others, and can be prone to depression. The Melancholy usually detests group gatherings and doesn’t seek to make new acquaintances.  She has a few friends, to whom she is extremely faithful.  Self-sacrifice is a great pleasure for the Melancholy, and she feels things intensely, though you wouldn’t always know it.  As a thinker and philosopher, facts roll easily off the tongue of the studious melancholy.  She would rather read or study than interact with others.

Gary Smalley likens the Melancholy traits to those of a Beaver. Her perfectionist nature makes her prone to procrastination and legalism, yet she is organized and self-disciplined.

“The Melanchoy is a perfectionist who must have his life in order and hopefully everyone else’s as well…” “They would rather talk quietly with one person in depth than banter with a group… The Melancholy is very sensitive and easily hurt and tends to take what others say in humor as personal and hurtful.”
-Florence Littauer, Your Personality Tree and Silver Boxes

Want to read more about the four temperaments?

God could have made us all Sanguines.
We would have lots of fun
but accomplish little.

He could have made us all Melancholy.
We would have been organized and charted
but not very cheerful.

He could have made us all Cholerics.
We would have been set to lead,
but impatient that no one would follow!

He could have made us all Phlegmatics.
We would have had a peaceful world
but not much enthusiasm for life.

We need each temperament for the total function of the body.
Each part should do its work to unify the action and produce harmonious results.

-Florence Littauer in The Gift of Encouraging Words

We believe that true love, real freedom, and authentic identity can be found only in the grace of our Lord and Savior Jesus Christ.
END_OF_DOCUMENT_TOKEN_TO_BE_REPLACED 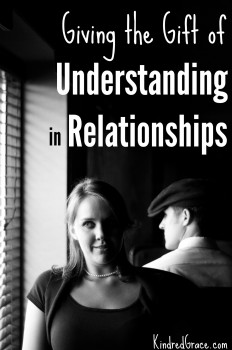 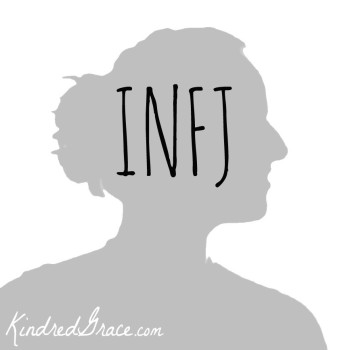 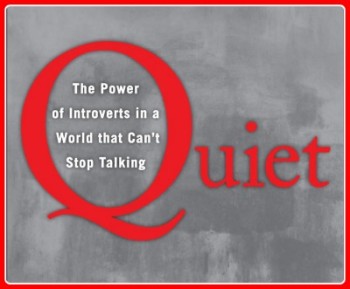