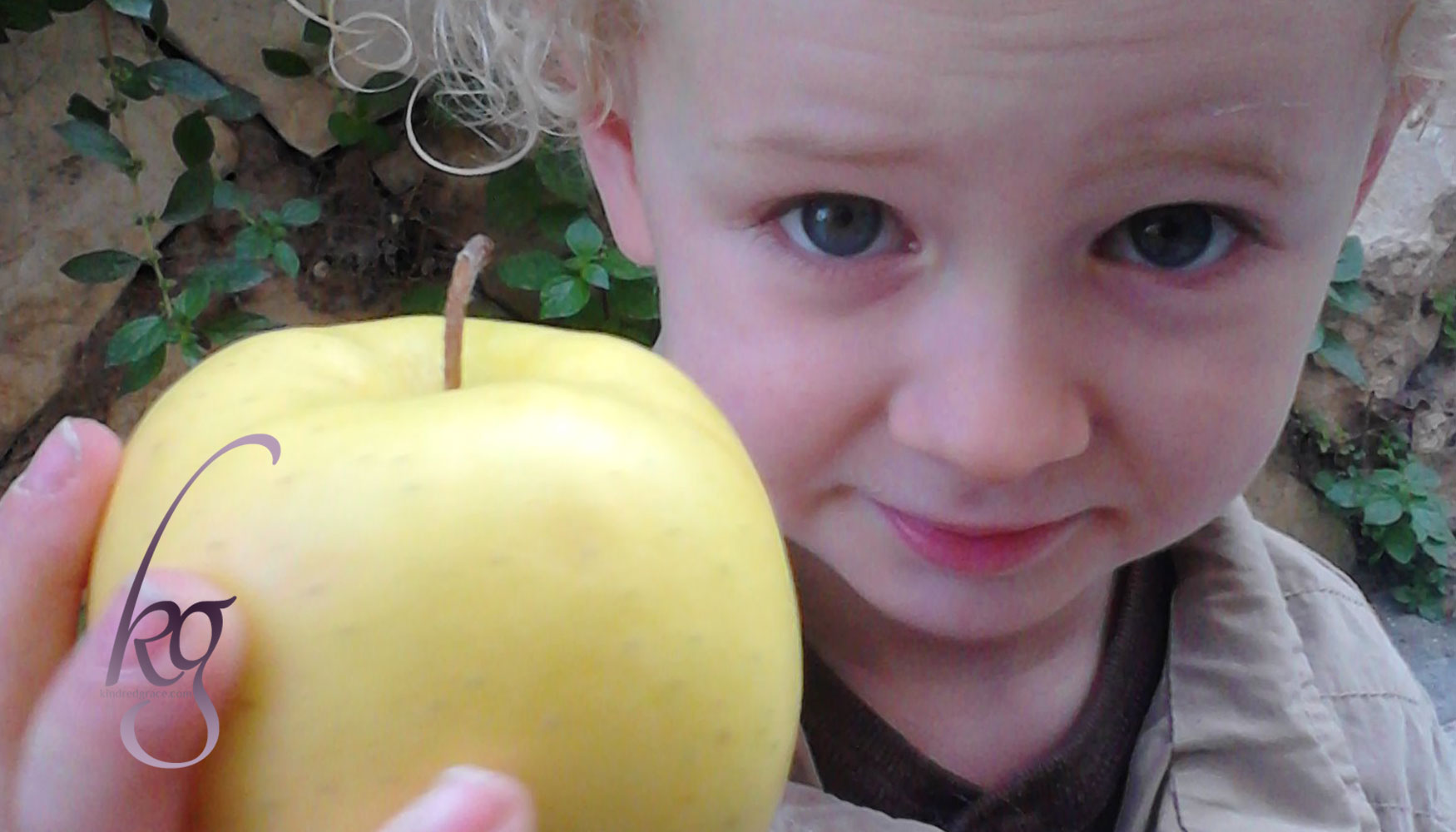 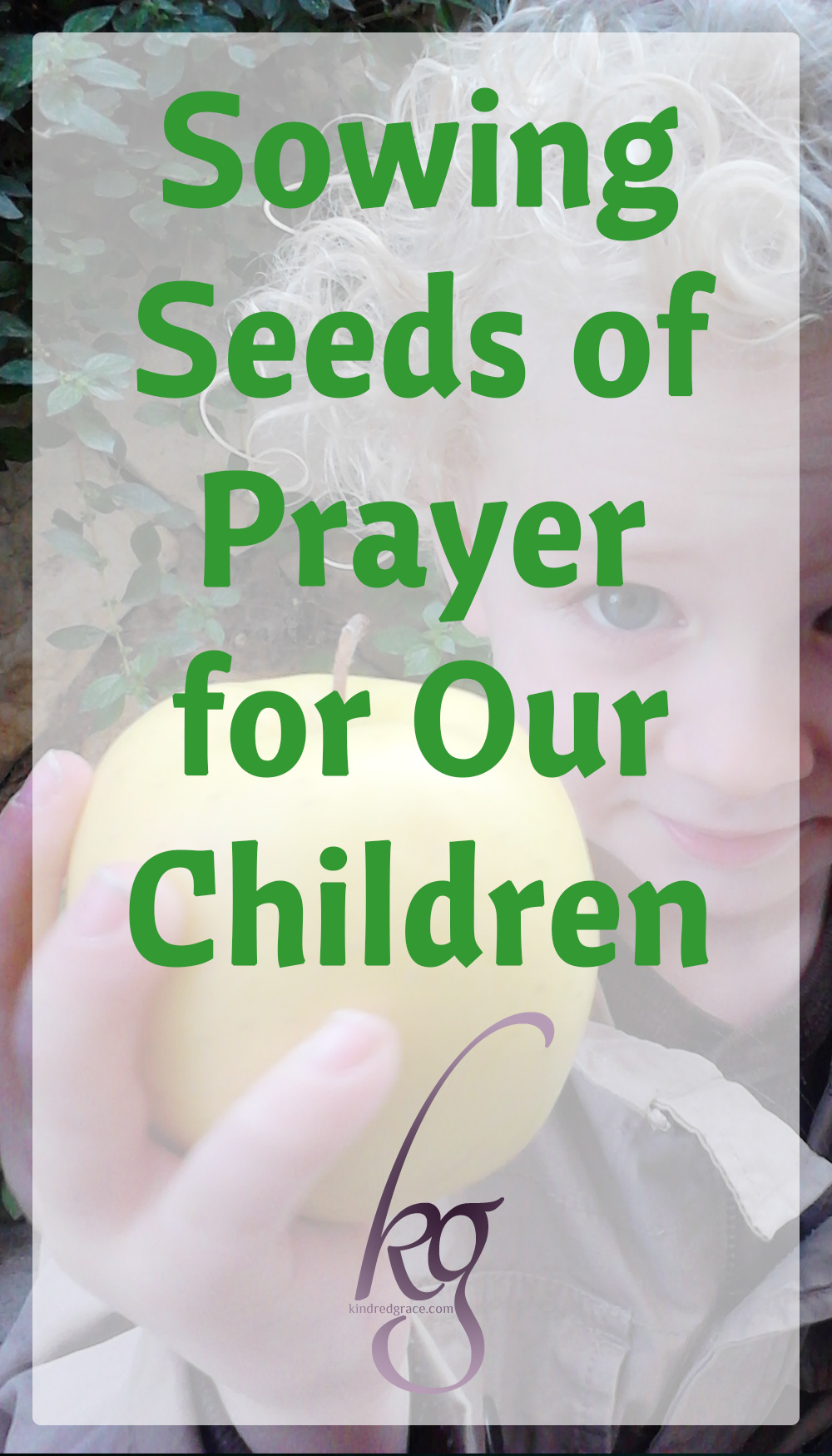 I first started praying for my son Aviel (and any brothers or sisters yet to come) when I was twenty, seven full years before he was born. (Aviel, pronounced ah-vee-EL, is a Hebrew name meaning “My father is God.”)

Honestly, I wish I had started sooner!  In my early single days, it simply never occurred to me to pray for my children. After all, I didn’t know if God would bless me with a husband.  Praying for my children seemed totally irrelevant until that first request was met.

My thinking on the matter changed during a worship retreat at a North Carolina farm. A leader, Melissa, challenged the young women from my small group, “Instead of watching a chick-flick with your friends, take that two hours and sow seeds of prayer into your future husband and children.”

Part of her admonishment took me by surprise.

Children… She said to pray for our children…

Take the time to sow seeds of prayer into your future husband and children.
Click to Tweet

Melissa didn’t make a theological case for her perspective, yet at the sight of this new mom, overflowing with love for the child in her arms, it was as if the Lord had turned on a light bulb in my heart.   Still a young woman herself, Melissa was passionately calling a group of even younger women to have a bigger perspective than the right here/right now.  Though praying for our husbands was something my friends and I did regularly, praying for my children was a new idea, and one I found oddly encouraging.

Sowing seeds of prayer for my children…

Now that was something I could grasp onto. Even though I was not yet in a season where childbearing was in the foreseeable future, this idea of prayer as an act of “sowing seeds” gave me a new perspective.  I could plant the seeds of my dreams and trust the Lord to grow them.

I could plant the seeds of my dreams and trust the Lord to grow them.
Click to Tweet

In the beginning, my mustard seed-sized prayers were simple and hesitant:

Lord, please bless me with children one day.

I fumbled over the idea of it, not quite knowing what to say, even realizing I was not praying out of my new revelation, but rather my previous habit.  At times, I questioned whether I was moving in faith or presumption, but His word promises:

As I pressed on, tending to this little garden contained in my heart, I noticed a change in how I was petitioning the Lord:

The seeds of prayer were germinating and taking root in my spirit. Over time my prayers even ventured in more specific directions. I prayed for their times in the womb, their births, the difficulties of the high school years, choices about careers and callings, but mostly I prayed for their salvation. I didn’t realize it at the time, but even as a single woman I was beginning to formulate a vision for passing on a legacy of truth, love, and grace — found only in Jesus — into my family.

These conversations with the Lord became easier, and I grew more confident in my belief that He would, indeed, not only give me a husband, but also a family. I was sowing bountifully and I hoped to reap bountifully. I could find rest in my belief that the Lord would hear and answer my petitions for their precious not yet born, not even yet conceived lives.

“Let this be written for a future generation, that a people not yet created may praise the LORD.”
(Psalm 102: 18 NASB) 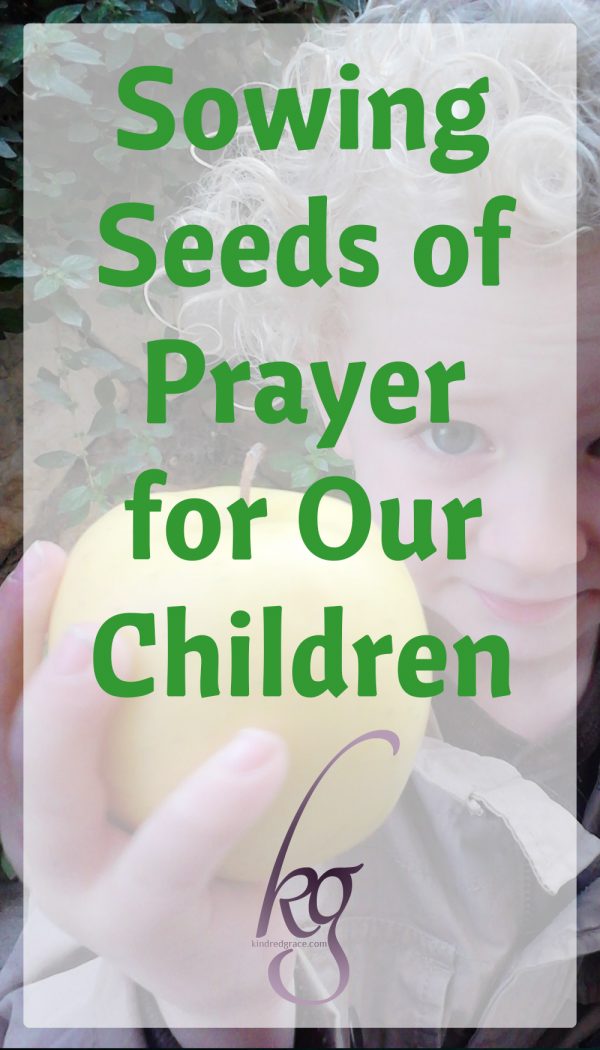 As the years passed, my increasingly emboldened prayers for the lives I believed He would birth through my body were shaping my overall outlook on life.  The Lord was renewing my mind, filling me with hope.  My tasks and goals took on a more transcendent meaning, not only holding implications for my own life, but also for those yet to come.

As an architecture student, my education was no longer about my personal goals. I pursued my studies as if I was being given a skill set to pass on to the next generation. My imagination would often dwell on the joy of drawing with my children. I remember praying my way through structures classes, finding motivation in the fact that I would be better prepared to help my little ones with math, and even develop safer spaces for them to live, as I learned t balance loads on a beam.  Maybe it was simply the maturation that came with such a rigorous degree that would be necessary to help me mother well, or even homeschool one day.

Living with the next generation in mind brought a new sort of accountability to my overall character. More than a few times a thought would surface…

Is this behavior you would want your children to emulate?

Living with the next generation in mind brought a new sort of accountability to my overall character.
Click to Tweet

My ability to resolve conflict more biblically with others was not just about those immediate relationships. How could I model grace for a child if I could not live in grace with those around me?  Certain earthly skills and fruits of the Spirit were being built into my understanding and personality for both my personal relationships, and for the specific purpose of passing them on.  I was to be His image bearer, because I was to, one day, train image bearers.

Being quite aware that if I was to have children, I first needed a husband, I unceasingly maintained my prayers for marriage.  However, I noticed how my prayers and approach to marriage changed with the added consideration of little ones. Of course my man-to-be had to be passionately in love with his Messiah and Savior, but no longer was I looking for a man who simply made me feel good about myself, or held a shared dream or sense of aesthetics.  I was looking for a man who would be my husband and friend, but also a man who would be a father. Our marriage was not to be self-centered, or even couple-centered, but a safe haven for rearing the next generation, for God’s glory. This shaped how I viewed the men in my life, and reprioritized what I valued in a potential match.

As the seasons of my life changed, the seeds turned to seedlings…then saplings. Today I am walking the firstfruits of those prayers that I offered the Lord in my single days.  He has given me a husband and our first child. As Aviel and I dance in worship during the day while Abba is at work, I see this little person, who has been prayed for even not yet created, praising the Lord.

Now, with great honor, as a mother overflowing with love for the child in her arms, I am passing on they wisdom I received; wisdom that shaped my heart and soul for mothering, and conformed me more into the likeness of my Savior.

Single ladies (and gentlemen), don’t delay.  Start with whatever measures of faith the Lord has given you.  If your circumstances make it hard to believe you will be a mother (or father) one day, start here:

Thank You for the children you will bring into my life.  Help me to lead them to You

The Lord will increase your faith in time.  Sow bountifully while you wait.  Your prayers will not be wasted.

Start with whatever measures of faith the Lord has given you. The Lord will increase your faith in time. Sow bountifully while you wait. Your prayers will not be wasted.
Click to Tweet