As a child, I looked ahead to certain ages. Ten was special: double digits at last! Thirteen would make me a teenager. Sixteen would be sweet, seventeen even more delightful, and eighteen: downright grown-up.

Remember Susan in the Narnia books?

“She was always a jolly sight too keen on being grown-up.”

“Grown-up indeed,” said the Lady Polly. “I wish she would grow up. She wasted all her school time wanting to be the age she is now, and she’ll waste all the rest of her life trying to stay that age. Her whole idea is to race on to the silliest time of one’s life as quick as she can and then stop there as long as she can.”

I had childhood plans and dreams running all of the way up to age twenty-four, and there they stopped.

They stopped at my imagined wedding day, a day that did not come that year. So I’ll admit: I hated twenty-four.

But it is the only age I have hated. Since that time, I’ve found too much joy in finding myself a deeper and happier woman, at finding my Jesus closer and more real with every passing year. How could I mourn the loss of my painful shyness, or the gaining of rich memories and dear friends? 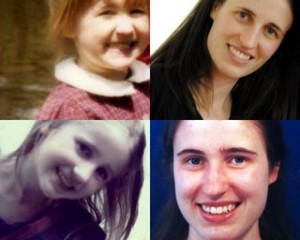 It’s only my culture that says I have to bemoan every year past my twenties. They were good years, yes, but I can honestly say that I have no desire to be twenty again – or even thirty. Based on the adventure so far, I know that when my forties finally arrive, I will have great cause to welcome (even) them.When it comes to age, my contentment level is a changing thing, and I can’t predict when it will change. Just this week, I winced when I quoted my upcoming age to a friend. I guess it’s time for another reality check.

I’ve been on thousands of miles of road trips: to the Grand Canyon, the salt flats of Utah, Yosemite Park, the Air and Space Museum, and Niagara Falls. I’ve traveled the roller-coaster-like roads of backwoods Quebec and the arrow-straight streets of Michigan, been a passenger on the switchbacks of northern Israel and the red sands of southern Jordan. I’ve lived in five American states and two foreign countries, calling some twenty different places home. And I can’t forget that feeling when the trip is almost over: counting off increasingly familiar landmarks, your anticipation building until you’re about to explode with joy.

That’s what getting older means.

Each white hair and laugh line, each added birthday, and each added life lesson is another landmark that says, “You’re getting closer!” I have no desire to cut the adventure short, but I cannot forget that at the end, I’m going Home.

The best, truly, is yet to be. 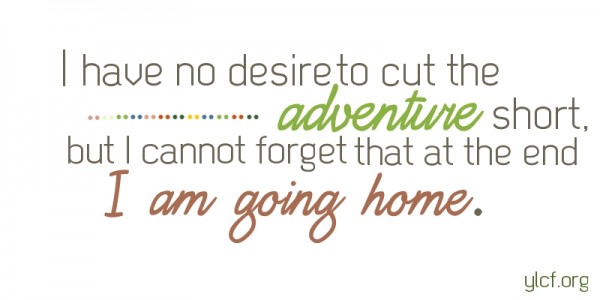