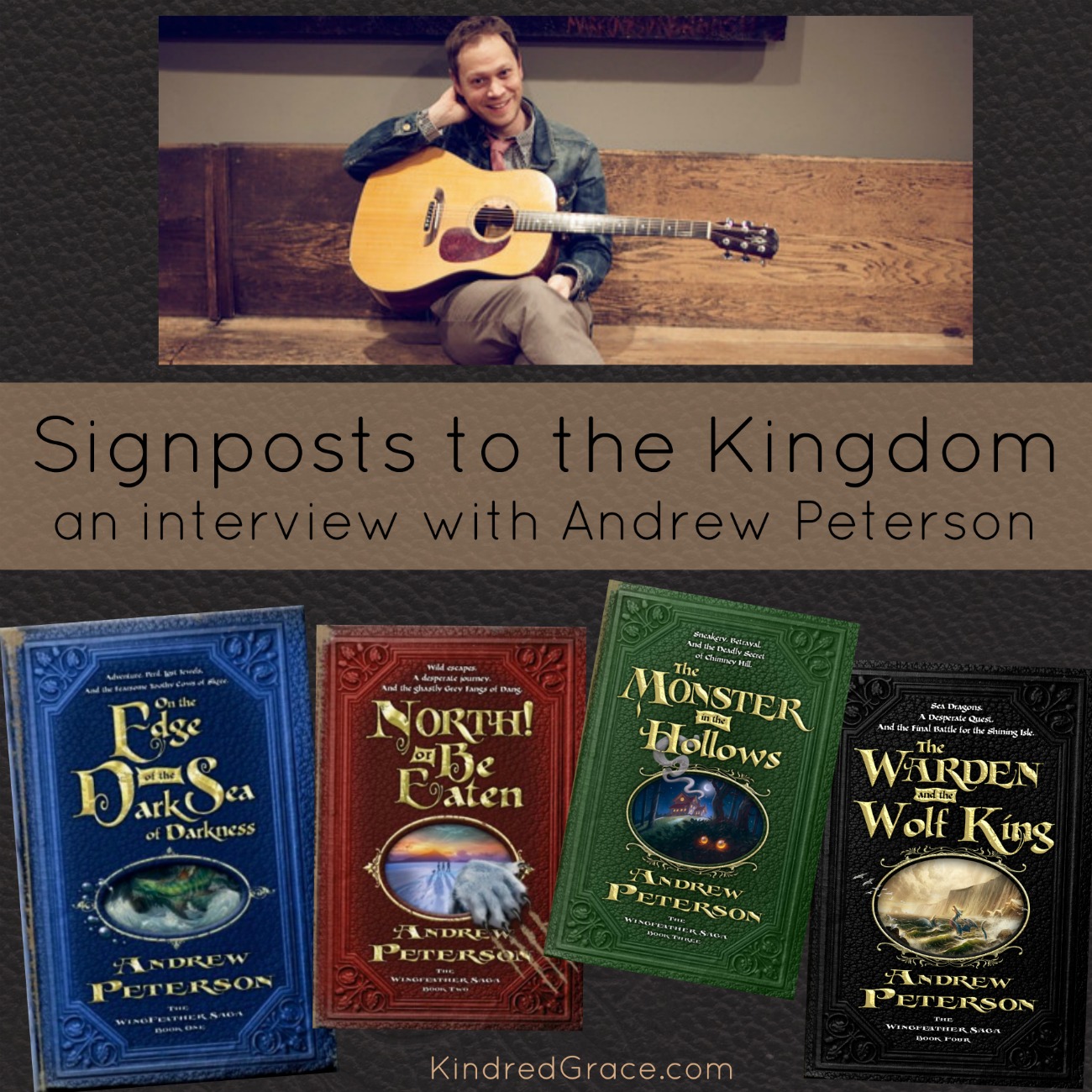 Several years ago, someone in my family brought a CD home to Eyrie Park and played it on our twenty-five year old stereo system in the living room. During the subsequent Christmas months, we played “Behold the Lamb of God” once or more a day. We were officially mesmerized with the music of Andrew Peterson. Shortly after that, my kid brother got his hands on a copy of Peterson’s book, On the Edge of the Dark Sea of Darkness, and we’ve been collectively geeking out ever since. For these reasons, I am thrilled to introduce you all to our next guest author (and give three of you the chance to win a copy of one of his books)!

Andrew Peterson is a man of many talents with a successful recording and song writing career, as well as being an award winning author and the host of a highly popular online creative community known as The Rabbit Room. Andrew hails from Nashville, Tennessee. 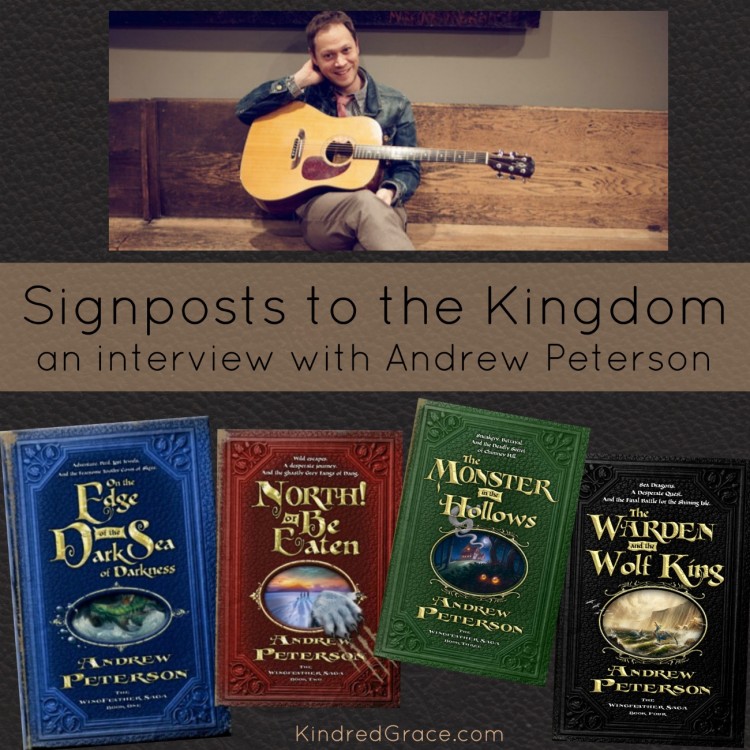 Everly: Hi Andrew! Welcome to Kindred Grace and The March of Books! Thank you for joining us. We’re thrilled to hear about you and your writing, both of books and music. How did you start writing in the first place?

Andrew: I’ve always wanted to write a big, epic fantasy. It wasn’t until my kids were four or five and old enough to handle the Narnia books that I finally had the guts to give my own story a try.

Do you have a group that critiques your writing? How do you ensure you are always improving?

My brother also happens to be an excellent book editor, not to mention the fact that he and I both grew up reading the same books and geeking out over the same movies. In many ways we speak the same sort of story language, which means that I trust his opinion about 90% of the time. After that, the group that critiques my writing the most consists of my wife and three kids. I’ve read all the books aloud to them more or less while I’m writing them, and I’m always surprised by how helpful they are. Helpful and honest.

Where do you write?

Most of the time I’m writing at a coffee house down the road.

Did you always know you’d be a writer when you grew up?

Nope. I knew I wanted to be involved in music or books or movies in some way, but I honestly didn’t think I would ever be good enough, or even be presented with an opportunity to become good enough. As far as I knew, the world of art was on another planet. I would have been embarrassed to tell my friends that my secret ambition was to do this sort of thing for a living.

What books inspire you?

Tolkien and Lewis never get old. I love Wendell Berry’s novels, Walt Wangerin’s books, as well as authors like Annie Dillard and Marilynne Robinson. As for old stuff, I keep a G. K. Chesterton book handy at all times.

How would you feel if someone wanted to make one of your books into a movie?

I’d be thrilled if that person was good at making movies.

How do you combat writer’s block, or do you not believe in such a thing?

I get writer’s block every single day. I get it between every sentence, after every line to every song. Just stringing a sentence together is an act of hope. Writing has never been easy, or particularly fun, for me, but remembering the thrill of finally finding a decent song or finishing a story and smuggling it off into someone’s imagination is what drives me up and over the blocks most of the time.

What hours do you keep?

When I’m working on a book I try to write first thing in the morning till about noon. The goal is at least 2,000 words a day. After that I work on music or tend to the honeybees.

What is your opinion of traditional publishing? Is it really going to be a thing of the past?

If by “traditional publishing” you mean actual books, no, I don’t think they’ll ever go away. I don’t mind eReaders so much, but there’s nothing in the world quite like a wonderful story printed on the pages of a beautifully bound book.

Christians and art haven’t always gotten along. What do you think Christians who write or paint or sing should remember today?

In the words of author David Dark, “There’s not a secular molecule in the universe.” And in the words of Gerard Manley Hopkins, “The world is charged with the grandeur of God.” And in the words of Jesus, “Behold, I am making all things new.” I think art is one way God has invited us into proclaiming the new creation, making little signposts that point to the Kingdom. 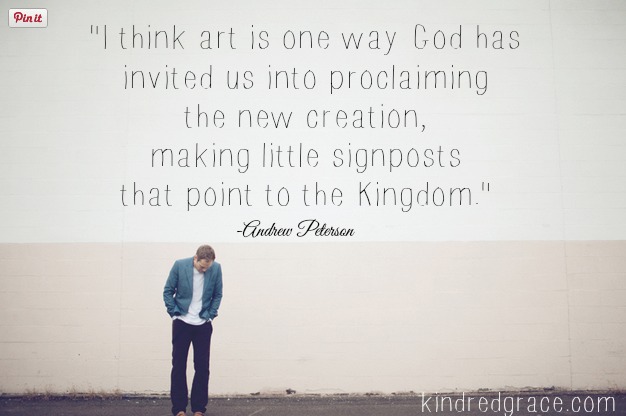 Your books have a lot of fantastic elements. Have you always enjoyed fairy tales?

For as long as I can remember, dragons and trolls and giants and mystery and adventure have held an irresistible allure.

Do you ever travel for research?

Nope. But my music career has allowed me to see quite a bit of the world.

Why write for children?

With this series it was because I remember some scary stuff about being a kid. I wanted to tell a story that would strike a little match of hope in a kid’s heart that the light is stronger than the darkness. Of course, I hoped the same for the grown-ups who would read the story, too.

Do you create an outline for each book or just keep the plot in mind as you go?

I had a very loose outline of the beginning of each book, just enough to get started, and then the story more or less went its own way. I guided it a little, but some of the most significant turns caught me completely by surprise.

What is something most people don’t know about you or wouldn’t expect?

Okay, here are a few random facts: 1) I used to have long hair and play in a terrible rock band. 2) I’ve kept bees for four years and I’ve never been stung. 3) I’m a total sucker for a good television series. 4) I’ve seriously considered saving up to buy a hot air balloon.

Do you ever base characters on people you know?

Yes, all the time. In The Wingfeather Saga you’ll meet versions of my children, my dad, my musical hero, my dog, and some sweet friends from Iowa.

Which book has been the most fun to write?

I have fond memories of writing North! Or Be Eaten at a local Starbucks while two of my best friends were recording an album at a nearby studio. We had lunch or coffee together almost every day. It was so fun to be doing good, creative work, work that we all felt God had called us to, and to be doing it in community.

How different is the process of writing books and writing songs? Which comes more naturally to you?

They’re both just as easy and just as hard in different ways. They both require a lot of work, a lot of discipline, and a lot of failure. Books are more of a steady, patient kind of work, while song writing tends to happen in spurts of activity. With both, it’s a matter of finishing. Anyone can start a book or a song—the hard part is bringing it home. And neither of them come very naturally to me—what comes naturally is sleep and food and watching one more episode on Netflix. The creative act is always a battle.

How do I know if I’m supposed to be a writer?

As a wise friend once said, “Your community defines your calling.” That means, listen to the people around you—your family and church and pastor and your honest friends—and hearken to what they see in you. Too many people get these weird, deluded American Idol-type dreams when they clearly aren’t gifted in that way. Our culture sometimes says things like, “You can do anything you want if you put your mind to it.” That’s baloney. I was not meant to be a dancer or an astronaut or an accountant. If you love to write, you should write. You should submit your gifting to God for the building of His kingdom, and you should move forward in faith. If the wise people in your life are affirming that, and if doors are opening to you, then your real job is simply to say “yes” to what the Lord puts in your path.

Andrew is graciously sharing three sets of his four-book Wingfeather Saga with our readers (U.S. mailing addresses only, please). Enter below! 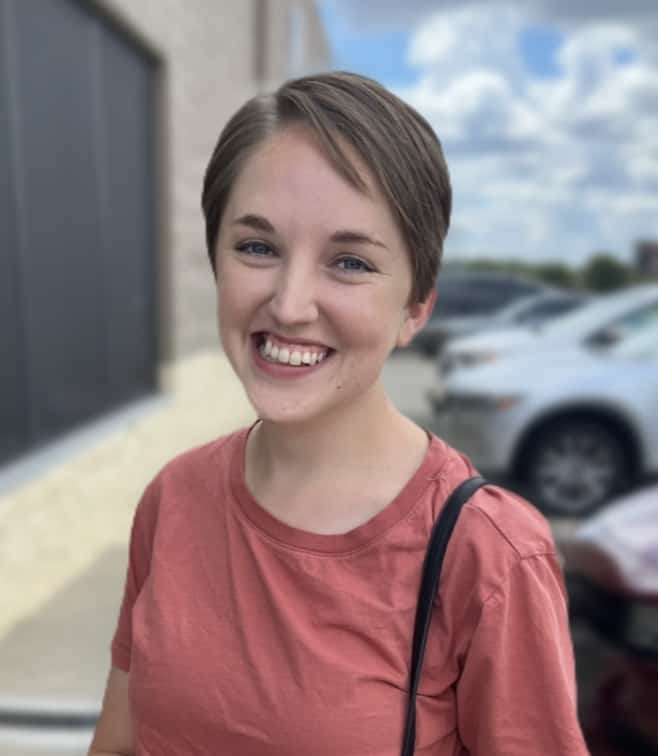