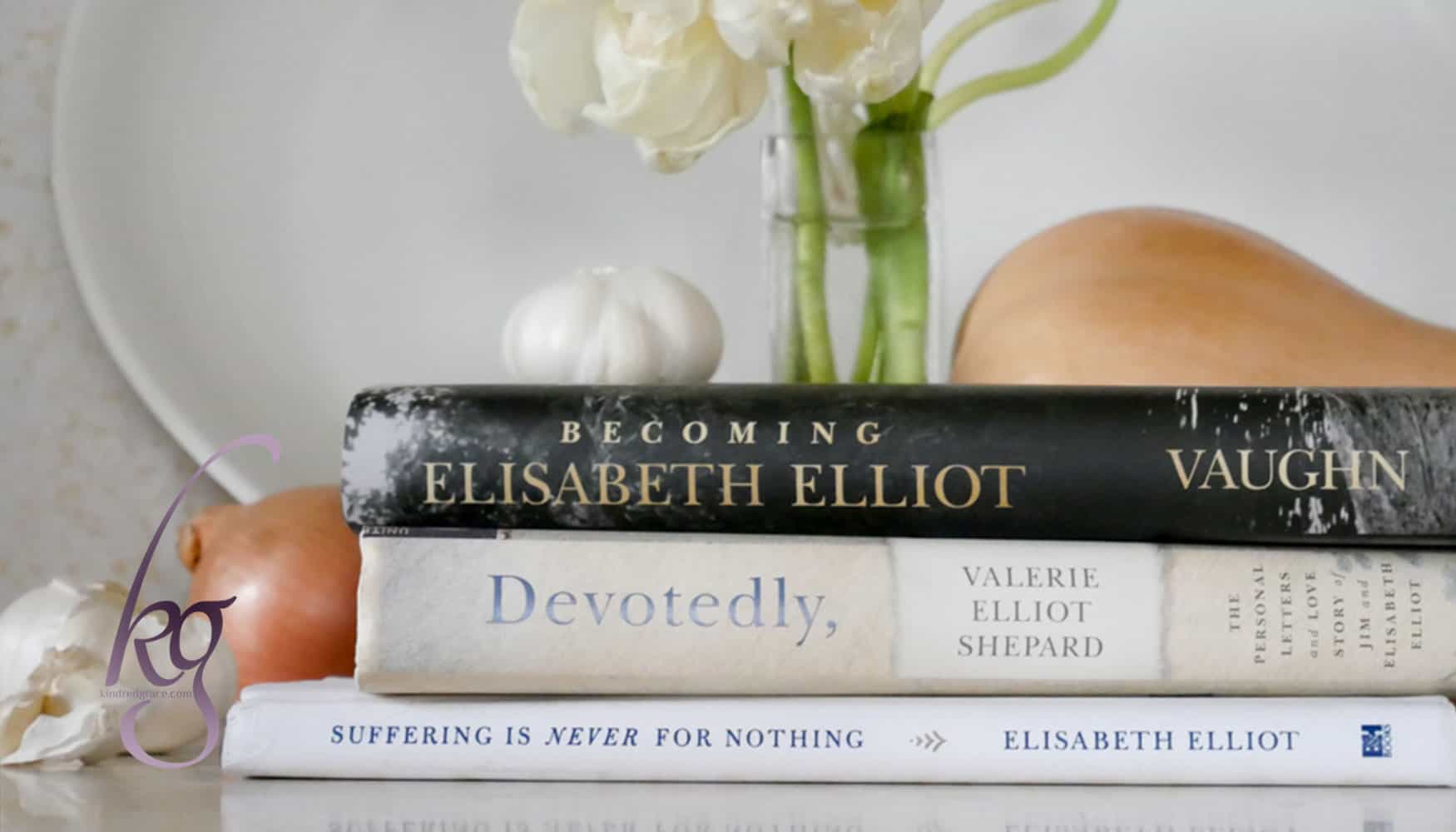 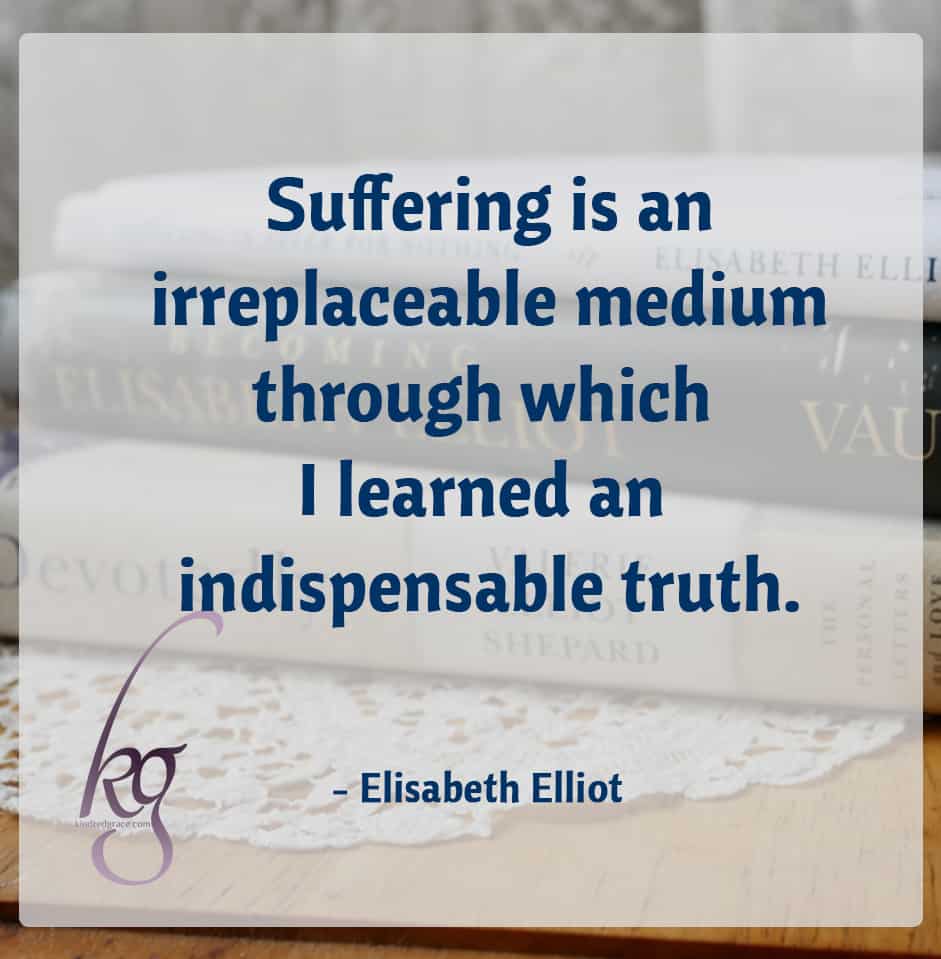 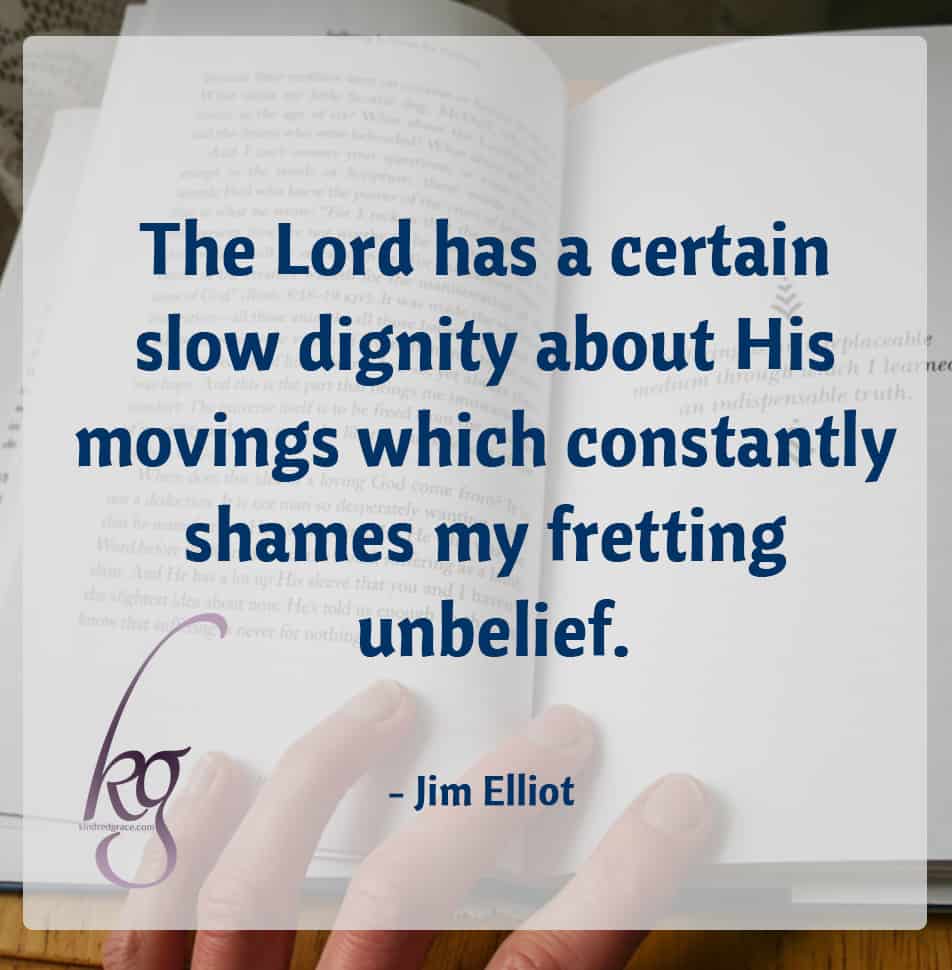 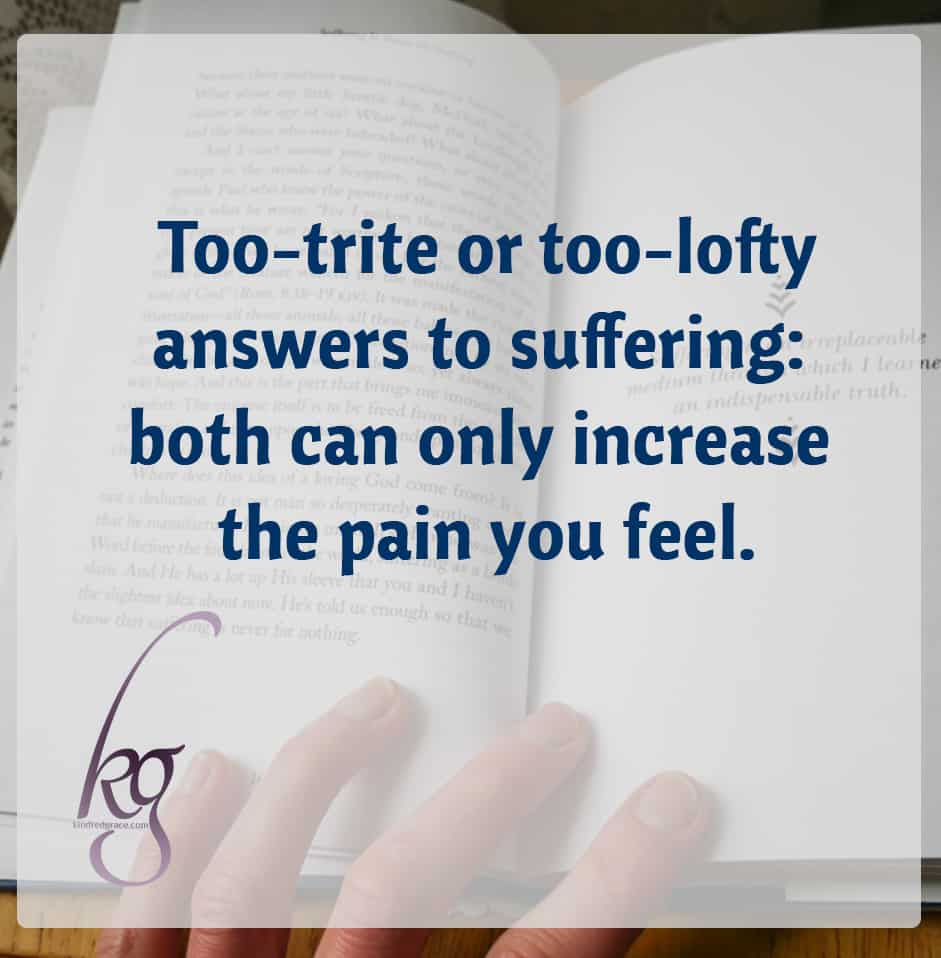 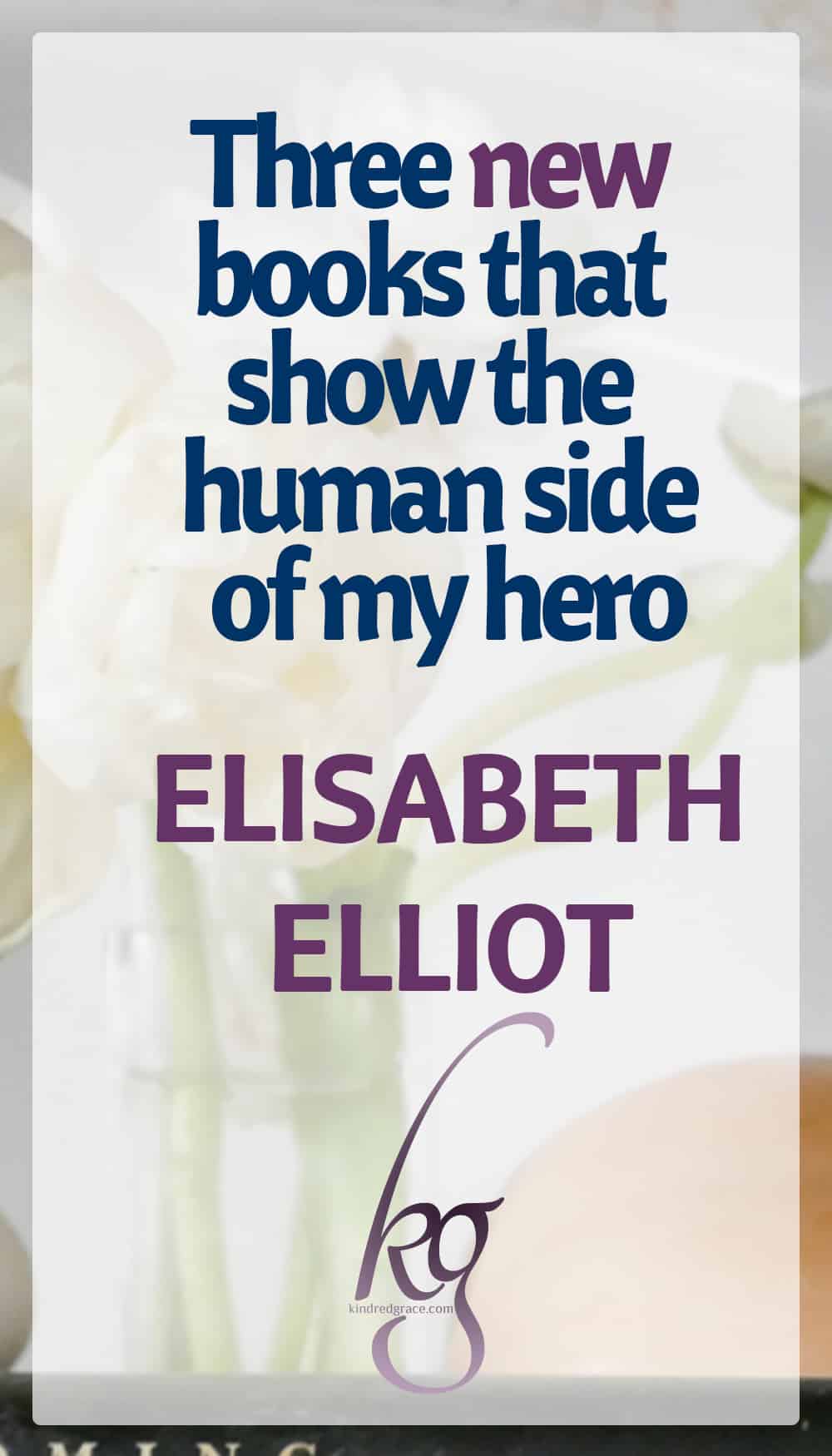 Once upon a time, I was a prone-to-dramatize teen who devoured many of Elisabeth Elliot’s books. I still need her forthright counsel to help rescue me from the swamp of self-pity, enabling me to diagnose even small disappointments as suffering — and thus something I can bring to Jesus.

Once a starry-eyed twenty-something who sat in the old-fashioned parlor at Bible school, listening to the real-life love stories we begged various staff members to tell, I still love a good love story.

Once the saddened thirty-something who watched Elisabeth’s memorial service online from a second-story apartment in Jerusalem while mourning the fresh loss of my own wise grandmother, I’m still grateful for the influence of such a godly woman in my life.

Still a writer who tends to tackle sorrow, loss, and hope, I keep discovering how Elisabeth Elliot’s thoughts have cropped up unconsciously in my own work.

No wonder I leaped at the chance to review her three newest books. One distilled the essence of all her books into a perfectly simple introduction. The other two introduced me to the very human side of my hero in a way that only grew my faith.

Suffering is Never for Nothing by Elisabeth Elliot

This slim white hardcover is unusual because it was transcribed from a series of six lectures that Elisabeth delivered at a conference in 1991. It’s easy to ignore the few textual glitches caused by moving from audio to written form, because the message is quintessential Elisabeth Elliot.

Perhaps, like me, you’ve found yourself completely disoriented in the face of great suffering. Or perhaps you’ve found small sadnesses to be heavy burdens because they seemed so meaningless. Too-trite or too-lofty answers to suffering: both can only increase the pain you feel.

Here, Elisabeth expresses some uncommonly simple truths, drawn from a lifetime of suffering in extreme and ordinary circumstances of loneliness and loss. I would gladly hand this book to the young and innocent, and to those already deep in suffering.

“Suffering is an irreplaceable medium through which I learned an indispensable truth.”

Elisabeth Elliot, quoted in Suffering is Never for Nothing

Even with at least 15 of Elisabeth Elliot’s books under my belt, I learned from Ellen Vaughn’s biography. Writing at the family’s request, she had the weighty privilege of access to Elisabeth’s own journals and papers – and the joy of traveling to Ecuador and experiencing connected places and people for herself. With these resources and more at hand, Ellen fitted story-pieces together, filled in gaps, and fleshed out characters. While describing Elisabeth and her colleagues as real and at times flawed people, she still treated them with dignity, holding a steady balance that avoided witch hunt, voyeurism and outright hero-worship.

As I experienced the flow of Elisabeth’s story, I was comforted to realize that I’m not alone in being so very idealistic. Ellen’s work also underscored the life-changing message I had learned from Elisabeth in the past, including the fact that we encounter a lot of mystery about why God called us and what the results have been, but as long as we’re obedient, we can count our efforts successful.

I would recommend this book not only to fans of Elisabeth Elliot, but also to anyone who would like to try out a life of obeying Jesus, but isn’t sure it’s for ordinary people. (It is!) This hardcover is also aesthetically delightful, with a striking black and white photo of a barefoot, toddler-wearing, jungle-traipsing Elisabeth on the cover, subtle spear motif on the endpapers, and rich assortment of photos inside.

Note that in this volume, Ellen takes us to 1963, when Elisabeth was about to board a plane with her eight-year-old daughter and leave Ecuador behind. I’m very much looking forward to reading the second book.

“If a duty is clear, the dangers surrounding it are irrelevant.”

Devotedly, The Personal Letters and Love Story of Jim and Elisabeth Elliot by Valerie Elliot Shepard

Wrapped in and filled with photos of Jim and Elisabeth’s handwritten letters and envelopes, this lush hardcover has one of the most beautiful layouts – inside and out – that I’ve ever seen. (I’m also a little in love with that comma in the title.)

This is Elisabeth Elliot’s love story from letters and journals discovered in an attic by her daughter. Valerie also provides poignant personal insight from time to time, while letting her parents’ unexpectedly eloquent words take center stage.

Can I be honest? As a longtime admirer of Jim and Elisabeth Elliot, I was really comforted by the fact that their relationship was pretty tempestuous at times. It made me feel better for being very human myself. And yet! God used them, which gives me hope that He’s not stumped by me, either.

Did you know that the title, Devotedly, primarily describes their attitude towards the Lord? This made for choices that puzzled the outside world, but were absolutely in line with their choice to become disciples of Jesus. Used in this way, the word devotedly is a good reminder that we’re not supposed to imitate Jim and Elisabeth’s love story.

I mean: not everyone is going to meet at college, find an uncanny likeness in their desires for future ministry, declare their love knowing each may be called to a life of singleness, live hundreds of miles apart and only meet a handful of times in the next several years, write dozens of letters, wrestle with family members who didn’t understand why they didn’t just get engaged, move to the same mission field only to live on opposite sides of a mountain range…and finally get engaged and married and become parents in a short-lived whirlwind of marital bliss.

But in their long, winding journey of surrendering their romance to Jesus, over and over again, Jim and Elisabeth showed that is essential – and joyful and fruitful and gloriously good– for all of us to be devoted to the Lord. In this way, even I, a longtime single woman, can have the same rich love story that they enjoyed.

“The Lord has a certain slow dignity about His movings which constantly shames my fretting unbelief.”

Finally, I told you that Elisabeth was very human. But did you know?

Hearty thanks to B&H Publishing for my review copies of all three books.