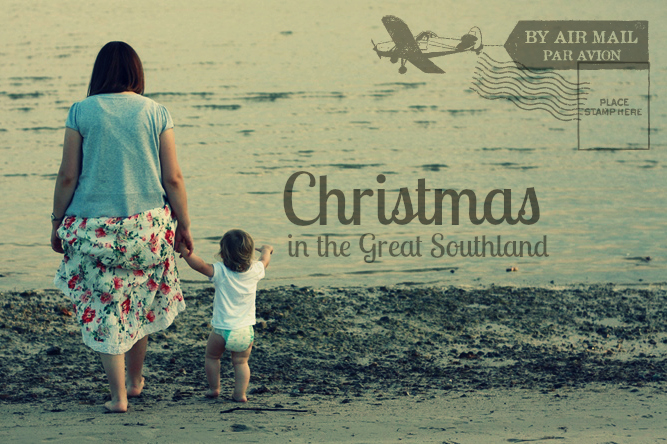 As I sit down to write about Christmas in Australia, it feels more like the wintry Christmas seasons of the movies we grew up watching. It’s grey, breezy, and unseasonably cold. And by unseasonably cold, I mean 19 degrees Celsius (66 F). Which I guess, if I’m being honest about it, is not cold at all by northern standards. But I had to go and dig out a cardigan – a cardigan, I tell you. This is serious business for a December, in Queensland.

Decembers in Queensland are characterised by rain, and humidity, and heat, and sweat. The one saving grace, the sanity for our heat-harried souls, is the breeze that comes drifting in off the bay, usually in the late afternoon. It is always a few degrees cooler here than in the city because the bay is our guardian. Where we are, shoulder to shoulder with the water, the summer storms seem to pass around us, and the summer breeze heads straight towards us. It is perfect.

In Australia there is a happy synchronicity between the calendar year and the work and study year. University students are currently basking in the post-exam respite, and school kids have just a couple more weeks of classes before breaking for the 8-week summer holidays, which will include Christmas, New Year’s Day, and Australia Day in late January. Combined Christmas and end-of-the-year parties are in full swing. So, too, are end-of-year school concerts. My little brother keeps saying “I feel nervous” as, for the first time, he’ll be performing in a little homeschool co-op Christmas recital. Next week, we have our church carols night, affectionately dubbed Carols in the Bush. It’s held outdoors at a local nature preserve and everyone gathers together around a sausage sizzle and then settles on picnic rugs to sing and worship amongst the trees, while the sun sets and the stars come out.

Queensland is not my family’s state of origin. We were transplanted here after many moves, which means that grandparents and cousins aren’t a part of our Christmas day celebrations – except when it comes to phone calls and text messages and FaceTime dates (what a time to be alive!). But my immediate family itself is nearly all grown up now, and this year most of us are in Queensland. This means that nearly everyone will be gathered together on Christmas Day: my sister Lauren and her little family, my brother Nick and his lovely girlfriend, my parents, and my little brother Tain. If only Andrea and her family could be with us, it’d be the entire contingent. In the meantime, almost all is a very happy thing.

Over time, our family has threatened to outgrow some of its favourite traditions, but my inner four-year-old always comes quickly to the fore and stamps its little foot. A couple of years back, my mother pulled out the pillowcases we’ve used as gift stockings ever since we were tiny. My (30-year-old) sister’s has all the Sesame Street characters on it. My littlest brother’s has Winnie the Pooh. Mine is the Smurfs (in case you were wondering).

I coughed and spluttered. “Too old? NEVER.”

So we still have the pillowcases, and as sons and daughters-in-law have joined the ranks along with grandbabies, we’ve only added more daggy pillowcases to the ensemble gathered beneath the Christmas tree. My mother also tried to phase out the inclusion of tiny individual cereal packets and poppers (juice boxes in the US?) in the pillowcases. When we were growing up and would travel to see one set of grandparents for lunch and the others for dinner, the little cereals were a fun way for us to get a quick breakfast in. They’re no longer necessary any more, but do you think we want them to stop? I just really like family traditions – and the less cool, the better.

To be perfectly honest, many of our family Christmas traditions were formed decades ago, and we are just not ready to let them go. When my siblings and I were small (and would wake at ridiculous o’clock), the rule was set in place: no one was allowed up until 6am, and we had to bribe mum and dad into wakefulness with tea and coffee. Somehow, the don’t-get-up-until-at-least-6 rule morphed into the absolutely-everyone-get-up-at-6 rule. I thought that at some point I would outgrow waking up early with excited butterflies in my stomach and the rule could be done away with, but that hasn’t happened; I am perpetually a kid.

The one tradition that has never threatened to grow old or be outgrown comes after we are all awake and stumble – sleepy-eyed and mussy-haired – from bedrooms and Mum and Dad’s guest rooms into the living room. There, we sprawl on the couches and listen as Dad reads the biblical account of the birth of Jesus. When we were small, Mum would make a tiny birthday cake and we’d all sing happy birthday to Jesus. Nowadays, it’s enough to revisit the centuries-old words of the birth that changed everything, a beautiful and solemn start to a day of sharing.

When we lived down south, Christmas Day itself was packed with travel and grandparents and cousins – a big meal at one family’s and then a big meal at the other’s, with gifts and games of backyard cricket in between. Now our own family has grown and our day is more low-key, but just as fun. In spite of soaring temperatures, we usually share a traditional Christmas lunch with roast turkey and vegetables and sparkling apple juice. Other families around Australia will be barbecuing, hitting the beach, taking the boat out, and eating lots and lots of fresh seafood. Desserts are uniquely southern hemispherean. While there is usually delicious Christmas pudding (posted up to us from New South Wales by my dad’s mother), cold desserts are the thing for hot summer days, with pavlova, trifle, and cheesecake at the top of the favourites list. Mangoes and peaches and plums are all in season – and so, too, are refrigerated leftovers. Leftovers for days!

After lunch is usually time for laziness and naps, and escaping the hottest part of the day. We might wander down to the bay and spend some time in the company of sparkling blue water and sand dune-capped islands. Then, as the temperature (hopefully) drops a little, everyone will find new energy for ball games outside, or a walk around the street, and a visit to the fridge for a dinner made up of lunch remnants. I suspect there will be lots of shouting and laughing (we are loud when we’re all together), a few misunderstandings and misplaced expectations (because we are five new little families now, as well as one big one), and lots of opportunities for squishy small person hugs and picture taking.

I’m getting a little teary just thinking about it. At the same time, however, it makes me sharply aware that not everyone I know – and not everyone reading this – will experience security or rest or family or provisions at Christmas time. For them, Christmas is a bleak reminder of what they do not have, not a reassurance of what they do. Cheering words and heartening phrases sound like clichés when they come from someone who has things that someone else has not. So I will not say anything, only point to the One who also had nothing – or who, rather, had everything and yet gave it up to step down into nothing in order to serve. If we have Him, we have all. The rest is just the cherries on top.