You can see the problems in your friend’s relationship, and maybe you want to scream “Break up with him already!” But what do you do? I was on the opposite side of this question once, when a close friend spoke honestly to me about the red flags she could see in a long-term-going-nowhere relationship. It took courage for her to share her concerns, because such discussion don’t usually result in a response of, “Yeah… you’re right.” 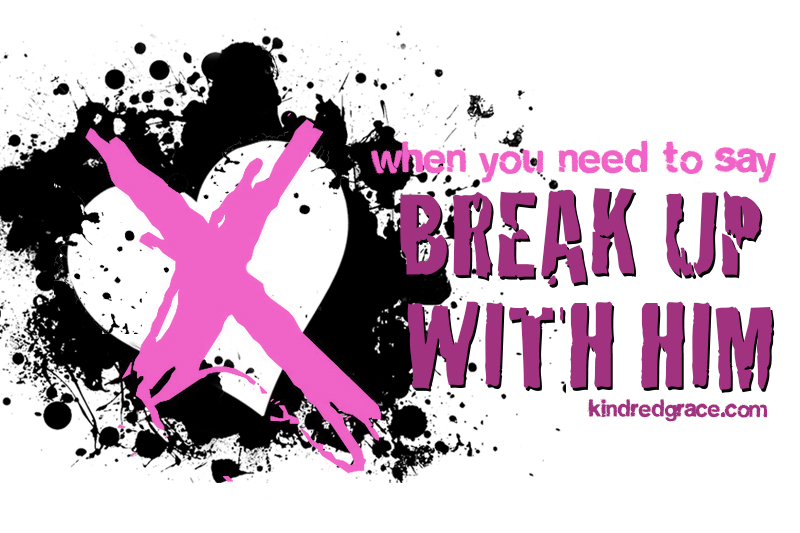 Here are a few reasons why I think it was a fruitful conversation:

1. We had a foundation of friendship.

This wasn’t someone who barely knew me or the young man in question. She had a personal friendship with both of us. In fact, she was my housemate. I knew she cared for me, and I knew she cared for the guy I was dating. Conversations about marriage were not out of the ordinary, nor were conversations about the greatness of God and our dreams to live out an adventure in Him. She was a trustworthy friend and we shared a mutuality in speaking truth and encouragement to one another.

2. We had been prayer partners.

I don’t know how much time she had invested in prayer prior to speaking to me, but while we lived together, we had spent a great deal of time praying over our relationships and future husbands. I knew she had a heart to see me well-married one day. My conscience had already been stirring as to the problems in this relationship, and that I needed to take a course of action. When she chose to speak with me, her words came as a confirmation rather than a shock. If you feel that you need to speak into a friend’s life, pray for the Lord to begin working on her heart and ask Him to let your words resound of His word in her life. Speak to God before you speak to her. Ask the Lord to give you a tone that she will hear.

This was not a relationship that needed to end due to very evident sin issues. The problems were more subtle, but needed to be addressed. Rather than speaking very negatively about what she could see, she pointed out the positives of where she saw God leading me. The criticism was constructive and full of hope. Even as she did need to point out some specific issues — a noticeable stagnate in his personal growth that was putting a great deal of stress on me — she surrounded that with the freedom that singleness might bring to fully draw both of us into the Lord’s maturity and purpose. Thankfully, she did so in a way that inspired me (in time) to want much more that what was going on.

4. When I was defensive, she got me thinking.

I had invested, I was hopeful, and I was trying. She knew that and she was was well aware that this was extremely personal on many levels. Even though her words were confirming, it was an insult to my pride that I needed her insight and accountability, and I had fear about what this change might mean. I absolutely gave her a defensive response. She heard it and she didn’t argue with me. Instead, she met me with poignant questions such as, “How did you feel when that happened?” and “What if that never changed?” Her points were right on, but it was to the benefit of our friendship that she humbly allowed me to talk through my emotions and the reasons I was resistant, even if my attitude was protective. This is the critical point where we both allowed the conversation to be about my relationship and did not make it about our friendship. The questions helped to keep the conversation on course, and they gave me some things to continue thinking about even after the discussion ended.

As a close friend, I am thankful for the words of wisdom and concern she offered, and I’m also thankful that she released me to work through those concerns on my own. After that conversation, it took a full three months of personal prayer before I ended the relationship. I needed that time to be sure I was hearing from the Lord, and to gain the courage necessary to take that step. During that time, she was not pushy nor did she pull away either. She remained my friend, and she did not express displeasure that I had not (yet) followed through on her advice. To do so would have been moving in a controlling spirit. We are not responsible to stand before God for the choices of others and she knew that. It was fully within my responsibility to make decision, and she honored my freedom.

6. She was sensitive when I grieved.

Even though I knew it was the right choice, I still grieved the end of the relationship. She met me where I was and gave me room to work through disappointments (because heartbreak is not only reserved for the one who is “dumped”). Even if she was relieved that I finally took that step forward, she still empathized with my loss. She did not gloss over my feelings, while reminding me that the Lord’s plans were good. Weeping lasted for the night, but joy surely did come in the morning! Though risky, the relationship talk certainly helped position me to say “yes” about one year later to the first ice cream date of many with the man I would marry. Surrounded with humility, empathy and love, that hard talk was one of the greatest (pre)wedding gifts I received!