I’m old-fashioned.  I prefer old hardbacks to new paperbacks.  I would rather read a book with pages I can turn than one that’s contained in a reader or computer.

So it only follows that I would always prefer to read the book before I watch the movie.

But last fall, I found my “read it 1st” mentality in a quandary. The movie “Courageous” was coming out — but so was the book based on the movie.  And the book was written by one of my all-time favorite authors, Randy Alcorn.  What’s a girl to do?

Read the book first — even though the book was based on the movie?  Or watch the movie and then read the book that expanded on it?

I knew I wouldn’t be able to see the movie immediately upon its release, because no local theater was playing it.  I checked my library’s website — sure enough, they had the book Courageous.  I even put it on hold. It was so tempting. 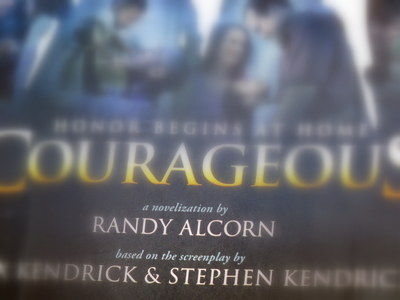 But I couldn’t bring myself to do it.  Somehow, in the same way it seemed wrong to watch a movie based on a book before reading the book itself, it seemed just as sacrilegious to read a book that was based on a movie before seeing the movie.  I didn’t want to ruin the powerful impression of seeing the story unfold for the first time on the big screen.  Because, of course, the script was written first.  The book was only based on the script.

I saw the movie in the theater over New Year’s, while visiting my parents (who had seen it opening night three months earlier).  They babysat while my husband and I went on a triple date plus one: with two of my aunts and uncles, plus my cousin Jennifer (a fellow book lover).   Aunt Shannan (another Randy Alcorn fan) had read the book first, so on the way home from the theater, she told us what parts of the movie the book expanded on.  Making me even more anxious to read it, of course.

When I finally got my turn with the library’s popular copy of Randy Alcorn’s rendition of Courageous, I began to doubt whether I’d made the right choice in watching the movie first.  I had a very hard time getting into it, because the first chapters are nearly verbatim from the movie script.  And the characters?  I could hardly keep them straight, because instead of focusing on what their names were, I was trying to remember what they looked like in the movie.

Before long, however, Randy Alcorn’s powerful writing pulled me right into a deeper story line than a 2-hour movie can develop.  How could I resist, when there were references not only to characters from Sherwood Pictures‘ other movies “Fireproof” and “Facing the Giants“, but also frequent quotes from Ollie Chandler, the beloved homicide detective of Alcorn’s creation?!

By the time I closed the final pages, I’d laughed and cried as much as I had with any of Randy Alcorn’s books.  But I have a sneaking suspicion I might have enjoyed it even more if I hadn’t seen the movie first.