As a mother of seven daughters, we’ve had a discussion or two about purity in our house.  However, when I tried to think of a specific conversation, I couldn’t at first.  Then I realized why.  I almost never use the word “purity”.  It’s a good word—solid and true.  But there’s an ugly side of the purity coin: self-righteousness. And while I don’t think it was a conscious decision, I wanted to avoid that.

We all have it. Self-righteousness is pervasive throughout humanity, much less the church.  But there are certain words in the church that seem to cultivate pride like a Hollywood agent looking for the next celebrity darling.  “Conservative”, “purity”, and its close cousin, “modesty”, are just three. They sound so beautiful, and even lofty.  And it’s because they are beautiful—or rather, they can be. But, if we’re not careful and in hearts not focused on the Lord instead of self, they almost insist on parading themselves as holier, godlier, and sometimes cooler than other words and principles.

With seven daughters, I have a wide variety of personalities to consider. I have daughters who need constant reminders not to let their outward expressions of godliness become more important than their hearts, but I also have daughters who need to know that just because they do value things such as purity, modesty, and similar virtues, it doesn’t automatically mean they’ve become self-righteous about it. As with anything, it’s all a matter of the heart, and when we are fixed on the Lord and embrace His work in us, things such as purity are beautiful—an outpouring of the Lord in our lives.

It’s a delicate balance that explains why when I talk to my girls about purity, I tend to share the principles of obedience (to the Word), decency, and appropriateness.  Of course, even those words provide an opportunity for temptation towards self-righteousness when we think about applying them to ourselves. Let’s face it: we humans don’t need much encouragement to try to feel superior.

But I did have four truths about purity that I wanted my daughters to embrace, four things that I tried to instill. 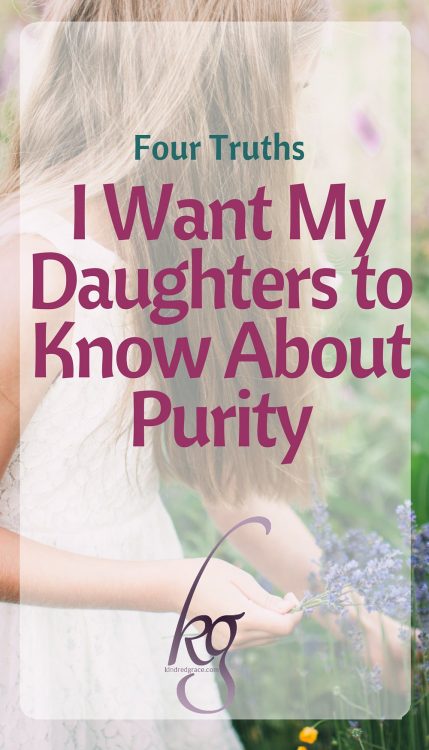 1. Purity is a gift from the Lord.

What the world tries to hide from you is that purity wielded inappropriately becomes impure by its very nature.  The Lord gave you this gift.  Even in our inherent sinfulness, He gives us this innocence—this purity.  And the minute it is misused, it’s gone.  Purity isn’t about not having sex.  That’s called virginity—a totally different thing. Purity is more, deeper.  It’s… well, purer.

And it’s a gift. Like any gift, sometimes we act like we don’t want it.  We set it on a shelf and ignore it.  We toss it aside.  Or, sometimes we return it to the store for something we’d like better. Other times we like it, keep it, cherish it.  And there’s nothing wrong with cherishing gifts from the Lord.

However, that ugly side I mentioned?  Yeah. It’s a problem—a very real, very ugly problem.  When purity becomes a matter of pride, not only does it become impure by its very nature, it also becomes ineffectual. Perhaps that’s why Paul warned in 1 Corinthians 10:12, “Therefore let him who thinks he stands take heed that he does not fall.”

And do you know why we need that warning so desperately?  Because when we take our eyes off the Giver of any of the gifts we receive and focus instead on the gift, we will be like Peter on the ocean.  We’ll fall.

What the world tries to hide from you is that purity wielded inappropriately becomes impure by its very nature.
Click to Tweet

2. Purity is a matter of heart.

If we define purity in its most basic form, it means clean, pure, unblemished. Morally speaking, it’s talking about going beyond the clinical definition of virginity and into the heart of the issue.  And really, isn’t that what Jesus did?  In nearly every instance, He took the obvious thing—murder, for example—and deconstructed it:

He did it again with lust.  You know, that whole “if you’re lusting, you’ve already committed adultery in your heart” thing?  And that’s the point.  Purity is a matter of heart. In a society that consumes purity before it has a chance to flourish, it’s a matter of keeping our hearts closed to the seductive whispers around us — and open to the Lord’s teaching. That can be pretty depressing. Even Peter, a man who walked with Jesus—defended Him in the garden—took his eyes off the Lord.  He denied the Lord! But that’s the beauty of issues of the heart: they’re redeemable. Jesus made purity more than a list of rules. Though it’s harder to remain pure in heart, it’s easier to repent and be cleansed again. 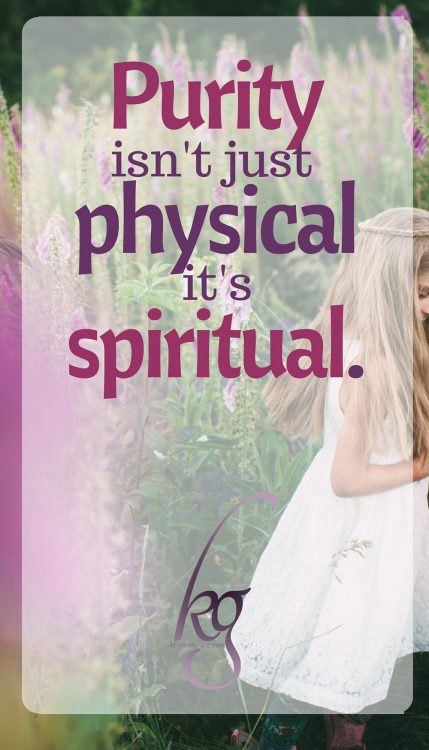 Purity is a matter of keeping our hearts closed to the seductive whispers around us and open to the Lord's teaching.
Click to Tweet

Purity says, “I’m Yours. I want to serve You and glorify You.” Self-righteousness says, “I’m glorifying the Lord by my many spiritual actions.” It may be a small nuance, but it’s a big difference. One is focused on the Lord, the other on self.

In some circles, not kissing until marriage is touted as the act of purity to the Lord. I’ve observed weddings where a huge to-do was made over the couple’s “oh-so-spiritual” decision to keep their lips virginal until they parade them before the congregation at the altar. What is pure about heralding purity?  It’s almost ironic. It takes a pure action and makes it impure by its immodest show.

Yet there is nothing impure in itself about saving kissing until marriage. Even sharing that information with wedding guests is not inherently wrong. But turning it into a show of righteousness—dare I say self-righteousness—cannot be the beautiful thing it should be.

One young woman isn’t any more or less pure because of her decisions regarding when and where to enjoy her first kiss. Her heart can be just as impure saving her first kiss for the altar as another girl’s is while making out with a strange guy she’ll never see again.

And that takes me to number four.

4. Purity can be regained.

Maybe it’s just me, but I think this is the most beautiful thing about what the Lord did on the cross.  He took the old “letter of the law” thing and turned it on its head.  He made things tougher. (He did. I’m sorry, but it’s a lot easier to avoid murdering someone physically than it is to also avoid murdering them through hate and anger—through words.) But this is where that beauty comes in.  If you physically kill someone, you can’t resurrect them.  But if you harbor hatred in your heart, you can repent.  You can turn that back to the Lord. You can show love.

The same is true of your purity.  When it comes to virginity, you cannot regain it once lost. It’s not possible.  But you can repent of a life lived to pleasing self. You can turn your eyes back to Jesus and lay your thoughts, your behaviors, or your choices that weren’t pure at His feet.  You can turn to the Word, read it, apply it.

Remember, purity is a matter of heart, and Jesus is in the business of doing beautiful things in the hearts of His people.

Ante Up!, Chautona’s long-awaited fourth book in the Aggie’s Inheritance series, releases today. Throughout this series, Chautona touches on purity in relationships, and rumor is that there’s more in Ante Up!, this time touching on topics for older and younger teens.

Read Gretchen’s review of Ante Up!. 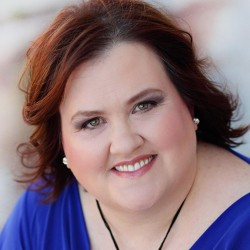