Does God speak to us in modern times? Some Christians say yes; some say no. Some feel that He guides us indirectly through the Bible, counsel from wise people, a feeling of peace in our hearts, plus our circumstances and our God-given common sense.

Since I graduated from homeschool, my life verse has been Proverbs 3:5-6, which tells me several important things about how divine guidance works:

The first two steps are pretty straightforward, but what does it mean to acknowledge God? Imagine for a moment that you are in a brainstorming session with a group of close friends, and they begin discussing a pressing question in your area of expertise. What if they hash that question over, desperately trying to figure it out…and they never once turn to you and say, “Jane, what do you think?”

Would you feel hurt?

I think I would. And sad, too, to think that they were missing out on the help that was sitting right there.

And so I aim to develop a lifelong habit of acknowledging Jesus in every perplexity and in every decision because, well, He knows everything. The promised result? He will direct my paths. Learning what that direction looks like from day to day has been an adventure that’s taken me up and down the coast of the US, and back and forth across the Atlantic Ocean. Here’s what I know: God is faithful to guide me. But that guidance looks a little different every single time.

And sometimes, shockingly enough to me, that guidance has meant complete silence: an apparent absence of any directions at all.

A few years ago, I went through a whole season of silence. When I trusted God to lead me through an important decision, He said nothing. Not to me, or to those close to me. As the weeks and months went by, I was deeply disappointed in the Person I love best — and I didn’t know how to process that disappointment.

But you know, the clues did come trickling in to show me, one tiny fact at a time, what He was up to, even in the silence. Even though I still feel far from clear on what God’s silences are all about, I am certain He was up to something: that He had a purpose, and a good one, for me.

Here are some things I’ve learned about the silence:

It’s the Christmas season. In a season where everyone’s expected to be festive, generous, joyful, and even downright jolly, it’s easy for some folks  to feel left out, if not doubly gloomy in contrast with the merrymakers who surround them. In a time of year where we hear the nativity story with its heavenly choirs, angelic messengers, and divinely-sent dreams, the silence of God in our own lives could be doubly devastating. 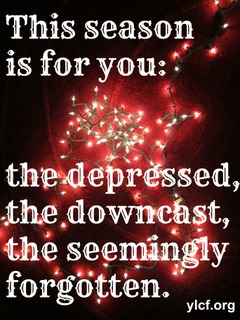 But I honestly think that this season is for you: the depressed, the downcast, the seemingly forgotten. That’s the message of Christmas: light shining in deep darkness to people who felt unseen. The Jews, wondering how in the world a good God could leave them under the thumb of Rome. Anna and Simeon in the temple, watching decade after decade for the promised redemption. Some random shepherds in a back pasture.

I’ve written in the past about how snow and candlelight both illustrate the power God shows…in absolute silence.

Sometimes silence is meant to help you slow down long enough to look up. To show Jesus the look of trust on your face. And to see the incredible love on His.