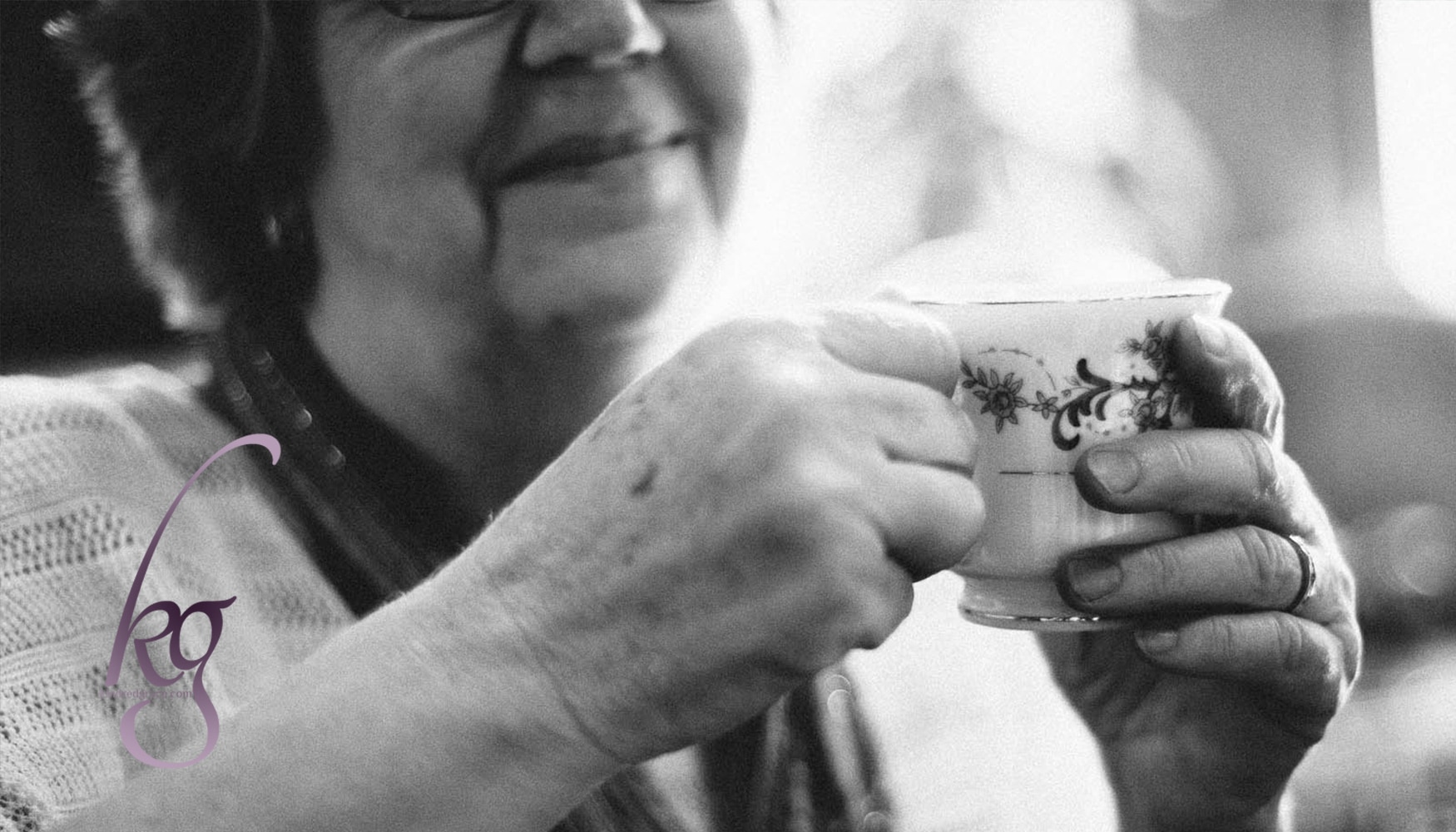 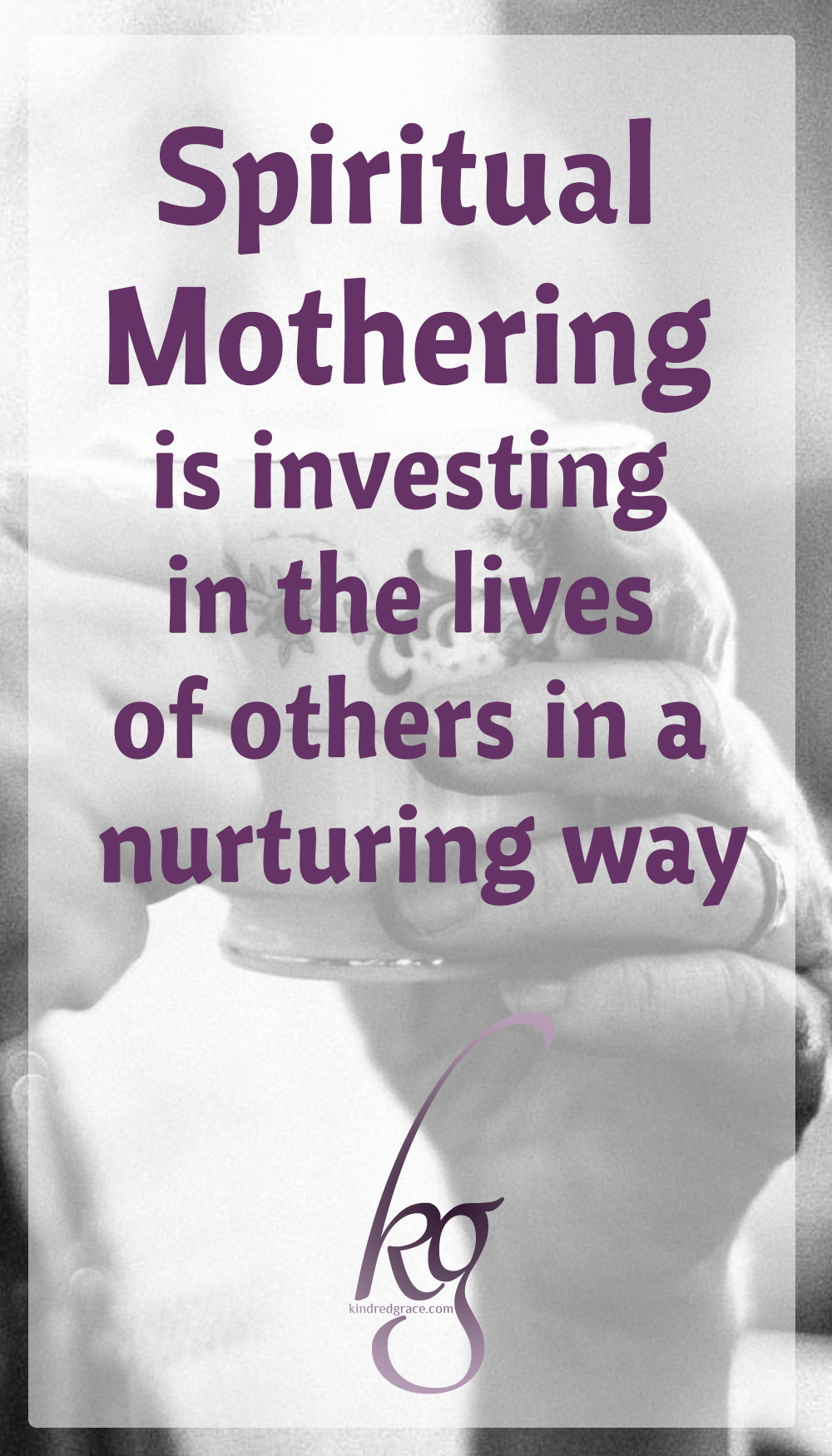 “I just need some help.”

This wasn’t the first time total and utter exhaustion had settled in. Being pregnant with number three made for many challenges while chasing a toddler and spending countless hours on the city bus getting my bigger one to school.

“Can you call someone to come over?” my husband asked.

All of my close friends were in the trenches, just like me. Besides that, as much as an extra set of hands would have been helpful, I needed more than the lifting of physical loads. What I was craving was motherly love: the kind that offers the encouragement that it is all worth it; the caring, experience-ridden reminder that one day I would miss having small babies.

Living out a calling to serve the Lord in Israel has made my mom less available than either of us would like, and as I battled loneliness, even some despair, I could feel something rising in my spirit.

Nothing about this isolation aligned with God’s Word. I knew Titus 2 well, and wondered…

Where are the spiritual mothers?

Months later, I was given a book with that very name, Spiritual Mothering by Susan Hunt. I soaked in every word to find out how to cultivate the inter-generational living I was desperate for.

Mere pages in, I was quite surprised by how she answered my question based on a common complaint she often receives from younger women:

“We’ve asked the [older women] to teach our Bible study so we can learn from them, but none of them are willing. ”

Using the story of Ruth and Naomi as a metaphor, she responds:

I read this perplexed, understanding the heart of the question from the younger women was exactly that: to be equipped.

Pondering the thought, I asked my mom, an avid Bible teacher, and she agreed with the Susan Hunt: “Where we are in life, it is really hard to take on the responsibility of organizing and preparing to teach a Bible study. If the younger women coming do not have the same investment in doing their homework, it is as if we’re going into the fields for them. I think Susan’s right.”

This all greatly challenged how I had been interpreting the Titus 2 command that “the older women are to teach what is good and train the younger women…” As the pages turned, and the  author’s thesis further clarified, why this doesn’t work eventually came together.

Spiritual Mothering is investing in the lives of others in a nurturing way so that we share the gospel as well as our lives with them.
Click to Tweet

Spiritual mothering, as Susan Hunt defines it most concisely in an interview on Revive Our Hearts is: “Investing in the lives of others in a nurturing way [so] that we share the gospel as well as our lives with them.”

Spiritual mothering is simply demonstrating the “shape of godliness”, Susan further explains in Spiritual Mothering: The Titus 2 Model for Women Mentoring Women. This doesn’t necessarily happen through an older woman taking on the role of Bible study leader. Likewise, the mentor match-up programs offered at many churches today–while they might appeal to an online dating generation–are too unfamiliar and impersonal for the older generation. Even the concept of asking for a mentoring relationship can be quite intimidating. Of course, all of these efforts can help facilitate spiritual mothering, but Susan Hunt is suggesting something far richer, far more organic and natural to the language we speak as women. What she is suggesting is cultivating friendship between women of different generations. 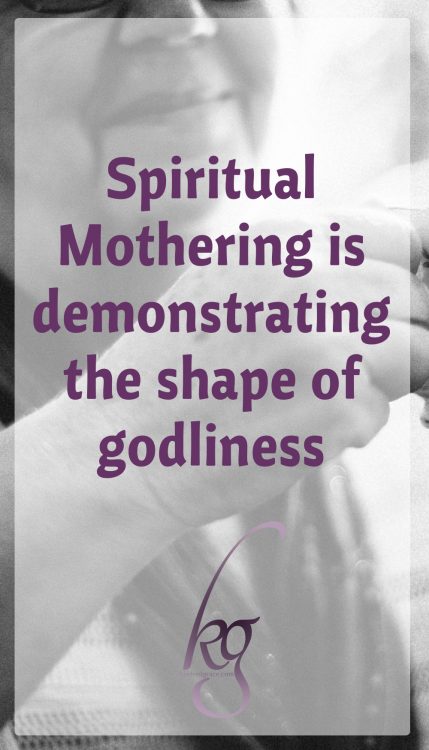 That in itself is a rather counter-cultural concept, but even more so, she admonishes: “The relationship isn’t the driving force of spiritual mothering – God’s glory is the premiere purpose.” This is fleshed out through keeping the details of the Titus 2 mandate a priority as older women allow younger women to look into their lives. Susan acknowledges that the older women may read that passage and attempt to disqualify themselves, believing they aren’t mature enough, do not know the Bible well enough, or maybe have even had too many failures to enter into a spiritual mothering role.

As I’ve changed life seasons and become a mother, I’ve even noticed insecurity about relevant information that can form in the hearts of the grandmothering generation. My mom has shared with me that she was taught to breastfeed much differently than my sisters and I and that she’s been surprised by how car seat standards have changed so greatly since we were children. Changes in practice can bring about sense of inadequacy or even a critical spirit furthering a generation gap, but in my spiritual mothers I’m not usually looking for such detailed answers. Mostly, I’m looking for encouragement that can speak eternity into the sleepless nights.

I'm not looking for detailed answers. I'm looking for encouragement that can speak eternity into the sleepless nights.
Click to Tweet

My mom offered that very gift right after my first baby was born when she often reminded me, “Callie, there are no two people in this world who are better parents for that little baby than you and Devin.” That’s what I needed to hear more than the how-tos of carrying for my son. I needed nurturing encouragement that emboldened me to walk in the role that God had ordained in my life as a mother, the admonishment to “love my children” as instructed in the Titus 2 passage; and that’s exactly what she gave me.

Susan Hunt further explains that spiritual mothering is much broader than common mentoring structures. “It may be up close or at a distance,” she says. Whether it is meeting weekly and looking at Bible passages together or simply an older woman calling a younger woman from time to time to encourage her, there is a place for women in all stages of growth to be used by the Lord as spiritual mothers. 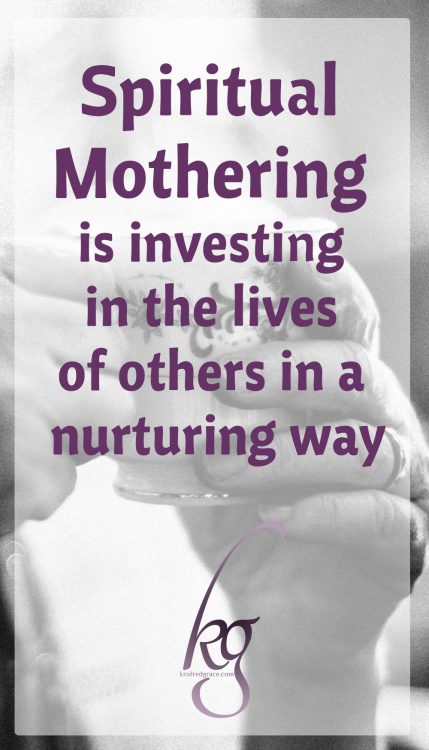 There is a place for women in all stages of growth to be used by the Lord as spiritual mothers.
Click to Tweet

In Spiritual Mothering, Susan Hunt offers some practical ways of fleshing this out through looking at Titus 2 as The Mandate, then using character studies from the bible to show The Model, and finally, she evaluates some of the basic spiritual and emotional needs we have as women through the whole of God’s word to encourage The Method.  Even with her sound scriptural exegesis, these sections feel more as nurturing a vision than a prescriptive look at what spiritual mothering should be. They serve as a means of building confidence in the ability to live out this role without dictating how such friendships should unfold.

Taking a step of faith to enter into this mothering role and allowing younger women to look into your life “can be risky.” As younger women, we should show great honor toward their vulnerability. While Susan does not emphasize this in detail, it is also gently implied that younger women have a role in allowing the Titus 2 model to manifest.

Again, I went to my mom who has adopted a number of spiritual mothers in her own life, to provide some ideas. She suggested: “Instead of asking the older women to teach your Bible studies, ask them to join with you, and then call on them to share their wisdom during the discussion.”

Susan Hunt has a similar story of beginning a women’s Bible study as a 50-year-old woman and being quite surprised by the number of older women who decided to join. When teaching a segment on marriage, she asked the widows to lead the discussion. She tells Nancy DeMoss Wolgemuth, “Afterward, one of the younger women said, ‘How can I go home and complain about dirty socks on the floor after I’ve listened to these women share their precious memories of their husbands and their marriages?’” At that point, she knew she had seen Titus 2 lived out beautifully in the lives of these women.

Being intentional in facilitating inter-generational Bible studies isn’t the only way this can take place, however. I’ve been inspired watching my mom form a friendship with an older woman, a holocaust survivor, who she met on a previous visit to Israel. They connected during a conversation in a hotel lobby, and when they both returned to their homes in the United States, my mom committed to calling her weekly and has even made the ten-hour drive to visit. As younger women, we can certainly do the same. We can take the time to call the older women in our lives or invite them to coffee. We can ask them their stories and give them the opportunity to step into the spiritual mothering role through the mutuality of friendship.

This kind of involvement in the hearts and lives of other women who are varied in age and life stories might not always be easy. The sacrifice of time, the courage to make a call, the vulnerability to share struggles might try to scare us away from entering in, but God’s Word does not return void. The fruit of obedience, the fruit of  giving and receiving motherly nurture will be eternally sweet.

God’s Word does not return void. The fruit of obedience, the fruit of giving and receiving motherly nurture will be eternally sweet.
Click to Tweet