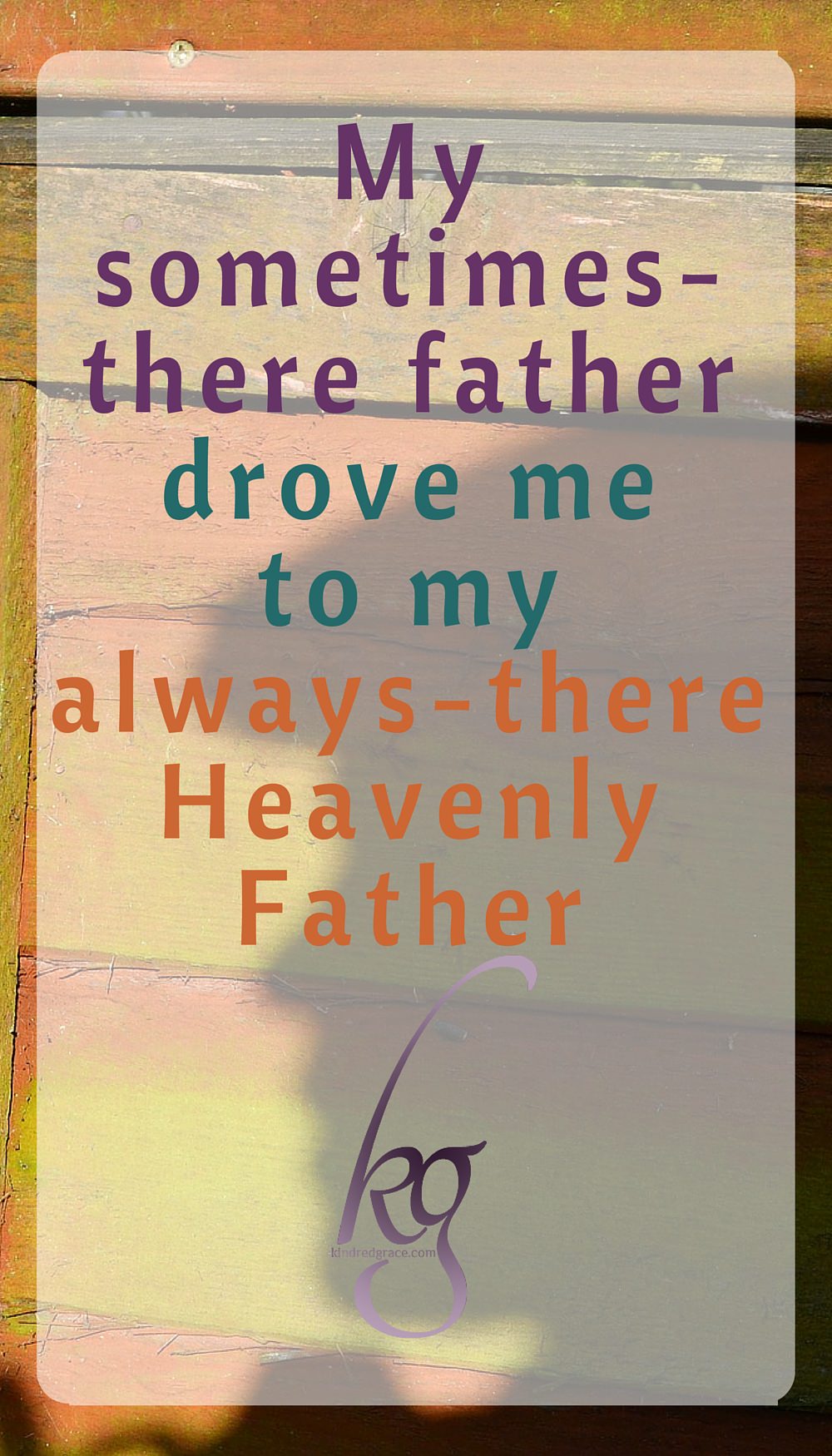 My early years were spent continuously on my daddy’s lap. There was no greater reward than hearing his praise. When he smiled at me, I was happy, and knew everything was well. When he frowned, well, I would brokenheartedly cry and make sure not to do whatever had displeased him ever again.

Then it happened. Sickness, death in the family, poverty…

And my beloved daddy became a druggie.

The always-there father gradually became a sometimes-there father. He slept a lot, and when he was awake, his eyes were always glazed over from the “medicine” the doctors had prescribed to him.

Years passed that way. We grew accustomed to his good days and bad days. Sometimes I’d sit and talk to him and he’d seem almost normal. Sometimes I’d go on a hunt around the house, gathering up all the blades and hiding them in my closet so that he wouldn’t hurt himself anymore. Through it all, I still adored him. Even after I got married and had my own children, I still considered myself a daddy’s girl.

Then, one horrible week, things changed. If you haven’t ever seen someone go cold turkey off of refined heroin, pray you never do.

My father came out of that experience a broken man. For months, we had to constantly monitor him. Rehabilitation was hard. After a year though, he started picking up his head again. And two years later, I looked at my husband with tears in my eyes and whispered, “It’s like the daddy I used to know is back.”

It was a beautiful feeling, watching my father play with my children. I had been so afraid they would miss out on truly knowing their grandpa.

The story wasn’t over yet though. My daddy still craved the security and seeming pain-relief of an addiction. So sometime along the way, he turned back to the bottle. Only this time it wasn’t a medicine bottle, it was a vodka bottle.

Gradually, we noticed that he was withdrawing again. Our hearts ached as we watched him stagger instead of walk. I silently wept inside while my mom cried on me over the phone.

Dad’s recently rebuilt relationships crumbled, and he seemed oblivious to it.

I’d face an issue and think, I’ll talk to Daddy about tonight. That always helps me feel better…

I could see it in Dad’s apathetic eyes. His body was there, but his soul was not. We only saw a shadow of the man that used to be, a shadow with scars on his arms and fresh cuts on his wrists.

He’d try ten-step programs. He’d try medical programs. But he always went back to the bottle.

Finally, my father got an ultimatum.

Pick one, either your family or your addiction.

I waited at home for the news. I felt dull of emotion; everything in me had been shot to pieces.

For the first time in my life, I found myself wishing that I had been born to a different man. It was so painful, being the daughter of this one. He was so wise and sweet when he was sober, but he was so dark and different when he was bingeing.

That wasn’t long ago, though. We’re still waiting to see the proof. We’re still watching with teary eyes and tight hearts. The dullness and shock has worn off of my emotions. I’m angry a lot. I cry sometimes. I mourn over what used to be

I have changed. I have converted from a daddy’s girl to a tired daughter.

I still love that man. In fact, I think that somehow I love him more. But my filial adoration has definitely taken a hit. Even so, when I’m confused and upset with him, it’s still his words that come to my heart.

Those words give me strength.

I can’t help but be thankful for my father. He’s an imperfect man that has plenty of flaws, but deep inside, his heart is still beating with love. The lessons he’s taught me resound throughout my life. His fingerprint has firmly marked my character. I am still proud to be his daughter. If I could go back in time, and choose from all the daddies in the world, I would still choose him.

God knew what was best for me. He knew what events would mold me into who I am today. He knew my experiences with my sometimes-there father would drive me to my always-there Heavenly Father.

And I am so, so thankful for the time I’ve had with Daddy, for the moments we’ve shared. No matter what happens tomorrow, I’ll always have the memories to cherish in my heart. 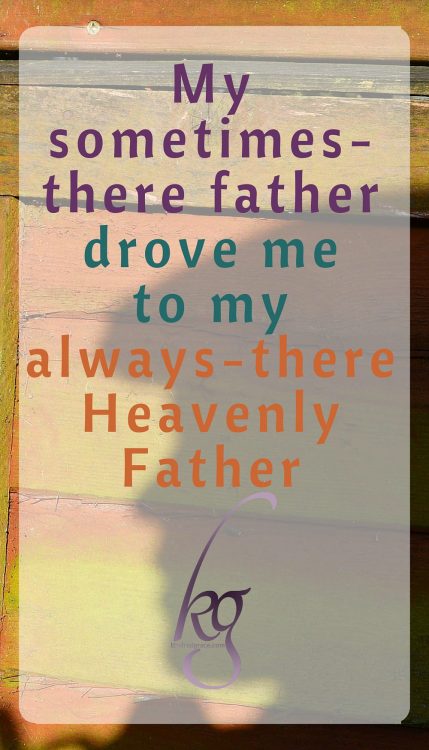 The first step to healing is admission.

It took me forever to admit that I, the girl whose father could “do no wrong”, actually had daddy issues. But I’ve confessed it now, so it’s time to move on to step two: forgiveness.

Just about everyone knows that it is difficult to forgive a never-there father. Those types quit before they got started, or they died before they could make a difference.

But forgiving the sometimes-there father? What an emotional roller coaster.

Thankfully, I have my always-there Heavenly Father. I know He’s ultimately in control, and He loves both me and my daddy more than either of us can ever love each other. Through the storm of emotion, I cling to that knowledge, and I reach out for my sisters going through the same type of issues.

“There’s hope,” I whisper to you. “Our Heavenly Father is bigger than this. And He’s always, always there.”

“God has said, Never will I leave you; never will I forsake you.” Hebrews 13:5