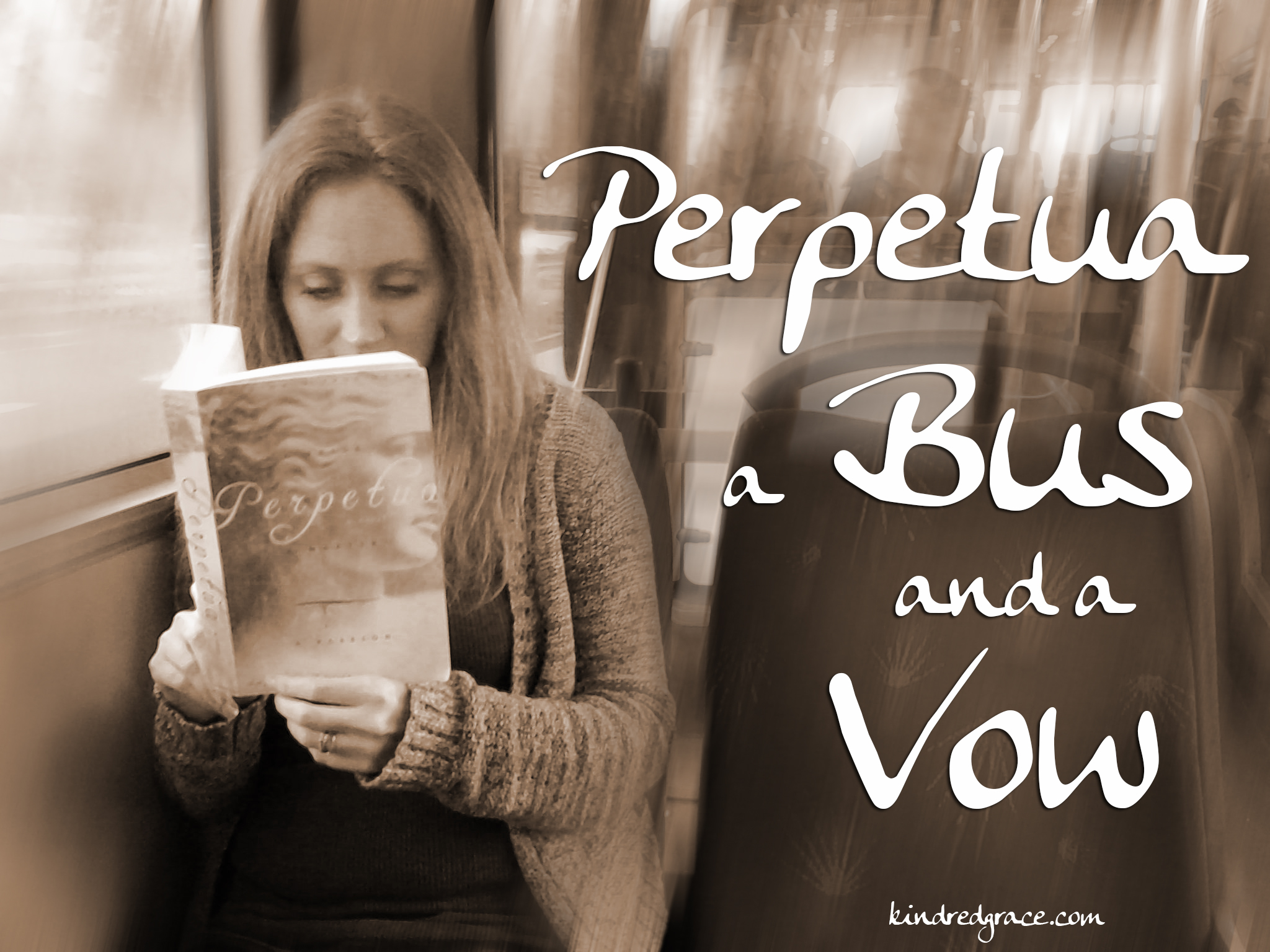 I am in Carthage, at the turn of the third century AD, and she has just become beautiful.  At least, she has just discovered that she is beautiful.  As her ornatrix adorns her with braids and jewels, I learn that she is Vibia Perpetua, the daughter of a Roman Senator, a woman of great wealth, nobility, and education.  Even though the self-revelation of her beauty is recent, I suspect she has been lovely, always.

I am awakened from my nostalgic dwellings on the era; the Roman architecture, the tastes of the delicatessens at her family’s table, flowing with the finest of wines, and reminded that I am on a loud and bumpy bus in the heart of Jerusalem’s City Center.

A bookworm by nature, but now a busy mom, reading is a love I have learned to make time for, even if it requires a less than ideal location.  Lately, that place has been found in the seat of a Jerusalem Egged Bus.  Totally alone, without child or husband, the bus has become my sanctuary of story. 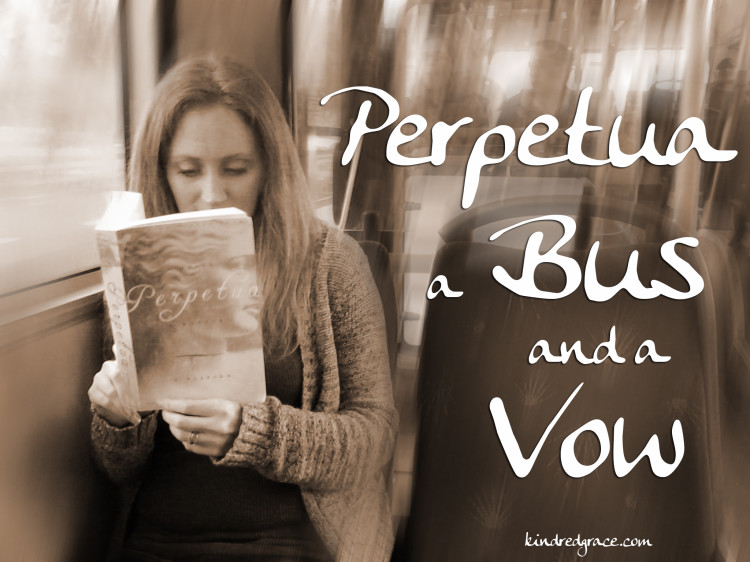 Most recently, as the driver has swerved through the city, I have traversed the Mediterranean African terrain, navigating the perils and splendors of the early church in the Roman Empire, through a novel by Amy Rachel Peterson, Perpetua:  A Bride, A Martyr, A Passion.

Perpetua, who died as a martyr around 203 AD, has long since been a hero of mine.  I was delighted to find a novel expanding upon the prison diary that she kept for her infant son in the days preceding her death.

It is the honor with which she walked out her persecution, combined with the tender descriptions of motherhood that I found most captivating upon my first reading of Perpetua’s original text.  She exposes the struggles of her feminine heart, torn between love for her father and son, and devotion to the One who suffered for her eternal life.

With each reading of her diary, my heart hurts for her as she is reminded of the separation from her baby, through the fullness of milk in her breasts. I agonize with the only other woman present, a slave named Felicitas, as she gives birth in their prison cell, just days before their execution.

A simple sacrifice, burning incense before the emperor, is all that would have been required to relieve Perpetua of a death sentence.  In a heart-wrenching scene, her father pleas for her to perform the sacrifice, for the sake of her baby, still nursing at her breast.  As Psalm 45 heartens, “Forget your people and your father’s house…” this young believer cannot be swayed.  Before the government council she proclaims, “I will not!” for she is a Christian.

And her fate is sealed.

She will face martyrdom with four others from her congregation.

The passion of her writing leaves much to discern, and much to inquire about the life that formed her so brave.  Perpetua never mentions her husband by name, nor are the details of her salvation or arrest historically known.  Having composed my own versions of her pre-prison testimony, reading Amy Rachel Peterson’s account would sometimes require suspending my own ideas in order to embrace her Perpetua. Other times, I was surprised by how similar our perceptions might have been, particularly how she was led to saving knowledge of Jesus.

My bus arrives; I push through the crowded doors and find an empty seat.

As Perpetua’s beauty grows, her knowledge of her culture broadens. A hand brushing her waist awakens desire, but the purity of her ornatrix inspires her toward morality. Her father’s opposition to reading Tertullian is curiously out of character for his academic nature, but conversations with her brother, a new catechumen, incites her curiosity in this One true God.

He was willing to give the life of His only son.

This is a grievous comparison to the carnivorous nature of the Roman gods, demanding the lifeblood of innocent children.  With Carthage the center of child sacrifice in the Roman Empire, the historical Perpetua had surely been exposed.

The hustle and chutzpah of the surrounding passengers fades as the story intensifies.

Her friend seemed so downcast and the child, Tumi, seemed so thin… too thin. Something was not right.  Realizing a ritual would take place that evening, in a panicked flee to the temple site, she sees the idol, she sees little Tumi…

I hear the bus doors closing and look up to realize that I have nearly missed my stop.

“Bavakasha, Please…” I say to the driver who looks into my mascara-smudged eyes and re-opens the doors.  As I leave the bus, I leave the trauma of the scene and once again enter the modern Jewish state.  This exit prompts a sifting between what is historical and what has been dramatized.  A process that enriches the original text, allowing details to surface that had been missed in previous readings.

In the introduction, Peterson mentions her decision to marry Perpetua and Saturus, described in the prison diary as a congregational leader who entered into imprisonment voluntarily.  Even with this foreknowledge, their marriage, surrounded by lightning and wild horses, rage and rescues, was initially hard to accept.

The romanticized plot line inspired an adventure into scholarship where I found evidence to support Peterson’s direction.  With a bit of historical insight, a revisit of Perpetua’s diary reveals directness with which the two relate to one another, unlike that of the others.

Bus stop by bus stop, chapter by chapter, I arrive at the end.

Rank no longer matters in the hearts of these brave believers. In Christ, slaves become freemen, and nobles become slaves.  The context of Roman classism provided by the novel adds an indirect explanation to one of Perpetua’s most stunning moments.  Seeing Felicitas lying broken and bare from the tossing of a wild heifer, Perpetua approaches her friend.  In an act of humble servitude, the noble woman becomes the ornatrix for a slave, covering her with an unbelted tunic.

The violence of the heifer has brought her own appearance into bloodied disarray. With a simple gesture of triumph, Perpetua requests a pin to tidy her hair.  She will not die as a mourner, but as a radiant bride for her Savior King.

One by one, they are each put to death, with details better left to the eyewitness account.  The last to die, with her hands on the gladiator’s sword, Perpetua’s virtue passionately endures to her very last breath.

And I close the book… noticing the Mount of Olives out of my bus window.

This time, my spatial reality it is not an interruption to my beloved novel, but rather a sobering truth.  His feet will touch down on that mountain one day, and it will split in two.  I have left my father’s house, and He has led to life in a city that will be a stumbling block to all nations. As we serve the Lord at the end of the age, our trials may parallel those of Perpetua’s era.  Will I be so brave as we near that day?

Lord, in any suffering that I might face, I vow to pin my hair.

I believe He understands, even more than I do.