Today we have Roseanna M. White, author of Biblical and historical fiction, with us to talk literature, critique groups, and to give away one of her books! I’ve loved Roseanna’s books for years. They beautifully blend history with faith. Roseanna is also my wonderful editor and cover designer. Plus she’s giving away Ring of Secrets, one of my favorites of her titles. 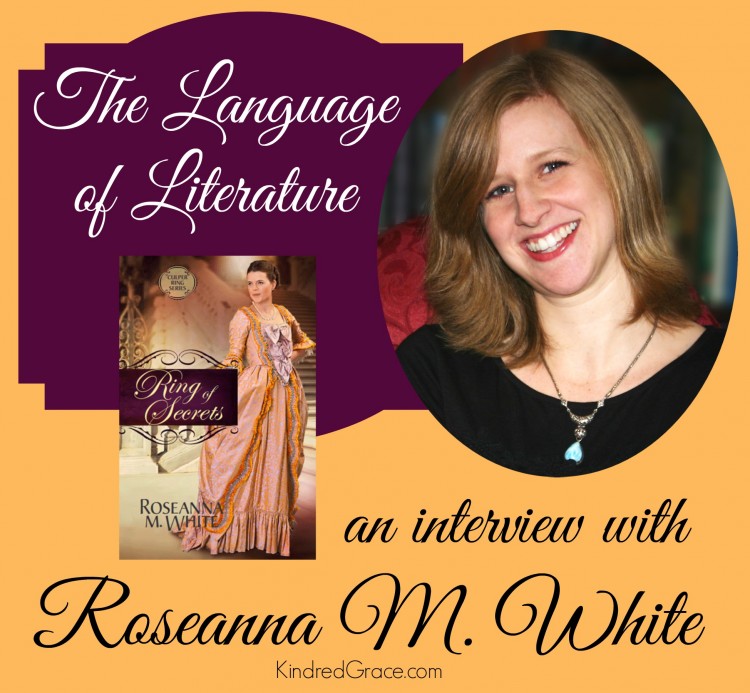 Rachelle: First, an intro! Tell us a bit about yourself!

Roseanna: Let’s see. I’ve been married for going-on-14 years to my highschool sweetheart. We have two adorable and brilliant (of course!) kids, whom I homeschool. We live in the beautiful Appalachian mountains in West Virginia, near where we grew up, and both hubby and I work from home. When I’m not writing or homeschooling, I’m editing and doing cover designs.

What does a day in your writing life look like?

I get up at 5:30 every morning to steal some quiet time before the kids roll out of bed, usually managing two hours of work time in the morning before I shift to things like showering and eating. School starts at nine. During our first break of the day, I’ll usually work on editing, marketing, or design projects. If, by chance, I have none of those pressing, I’ll try to write a bit more instead. Then more school, afternoon and evening activities…if I haven’t met my word count goal for the day, I’ll take another hour after the kiddos are in bed. If I have, I’ll collapse in front of the TV with the hubs.

What a day! Say, what’s a favorite work of fiction?

This is always so hard for me! I’ve always been a voracious reader, and having read everything from the Ancient Greeks through modern fiction, I can never pinpoint just one favorite. I know, I know. A total copout of an answer… So…in classics, I loved Pride & Prejudice and Jane Eyre. I wrote my senior thesis in college on “King Lear,” which convinced me that Shakespeare is one of the most brilliant writers ever to live. Hands down. (News flash, right?) A Separate Peace changed the way I looked at the world. I’m totally hooked on my best friend’s (Stephanie Morrill) young adult fiction novels. I love the biblical fiction of Mesu Andrews, the early American works of Lori Benton and Laura Frantz. I was one of the first cheerleaders of Julie Lessman and Julie Klassen…and that’s barely a glimpse.

Love so many of those! What’s a book that has influenced the way you write yours?

Ack, another hard one! One of my earliest influences was L. M. Montgomery. I’m not sure how similar my writing style is to hers, but her Emily series became, in many ways, my life philosophy. Emily, you see, was a young writer. I read those books when I was 11, and then when I reread them at 21, I realized exactly how many of my life and writing philosophies were based on Emily. Of course, at the time when I really started cranking out the books, I was reading a lot of my husband’s Orson Scott Cards. So while I don’t write fantasy or sci-fi like he does, I can see his influence in the way I write dialogue and deep thought.

Francine Rivers taught me how to ask the hard questions. Lori Wick how to see the sweet things in life. MaryLu Tyndall to keep excitement present. Julie Lessman to keep the passion there, simmering. Unlike many writers, I have never gotten all the way through a craft book, so I can’t credit any “how-to” books on helping me develop my writing system or voice. But after reading sooooo much and deciding what I love and what inspires me, I have to say there are a gazillion fiction authors who have taught me a ton.

Great answer. Speaking of fiction, you incorporate literature a lot into your own writing…how did that come about?

Well…I attended St. John’s College (a.k.a. The Great Books School), where every student takes the same program of study, beginning with Ancient Greek texts and working our way up through the ages of Western Civilization until you get to modern American political philosophy. We learned Greek and French, we studied music, physics, mathematics, great literature…and we spent four years in small classes (12-16 people) talking about those texts. That education, and those books, work their way into everything I do. I love speaking the language of literature, because it allows you to talk about everything.

So for instance, in Ring of Secrets, I can talk about the Lavoisier my chemist-hero so adores—because I’ve read it, I’ve learned his system, I’ve done his experiments. I can talk about the political theorists they were discussing for the same reason. I can share his excitement about a then-new translation of Homer just arriving from England. And I can pour my love for this stuff into characters who love it too.

Have you ever worked with other authors in a critique group or mentorship of some sort?

Absolutely! It was 2007 when I first thought I should find critiquers (or critters, as I call them). Though my first group didn’t stick, I did keep one of those original three partners, then she brought in another, and then I met Stephanie Morrill at the 2007 ACFW conference and recruited her too. That first critter passed away from cancer in 2011, and I’ve drifted away from the third member, but Stephanie and I still crit for each other. I’ve also found a few others that I work with individually. These are authors whose strengths complement mine.

Dina, who is so fabulous at seeing the big picture and big plot points. Amanda, who is so immersed in the historical world that she finds goofs I never even thought to question. I don’t rely on them as much as I did when I was still trying to find contracts, but I know my books are better for their input, so it’s rare indeed that I’ll turn in anything without at least one of them weighing in. And my husband is a huge help to me here too. He’s not a writer, but he knows story and often helps me work the bugs out of my plots.

Now I’d like to ask you about one of those books of yours that I love! Can you tell us a bit about Ring of Secrets?

I’d love to! In Ring of Secrets, we follow Winter Reeves into the heart of the fashionable Loyalist society of New York during the Revolution. Having grown up on a Long Island farm to Patriot parents, Winter hates the world her grandparents have forced her into—and hates even more the face they force her to wear. At least until she realizes that by playing the role of witless society lady, she’s in a position to feed information on the British’s movements to her childhood friend and his Patriot spy ring.

But then Bennet Lane arrives in the city of New York. An academic from Yale, Bennet is an absolute dunce with the ladies, but is intrigued by the mysteries in Winter’s eyes. And determined to pay her court partly as a cover to his true purpose in returning to New York: to ferret out the Patriot spy he knows is somewhere in the city’s ballrooms. 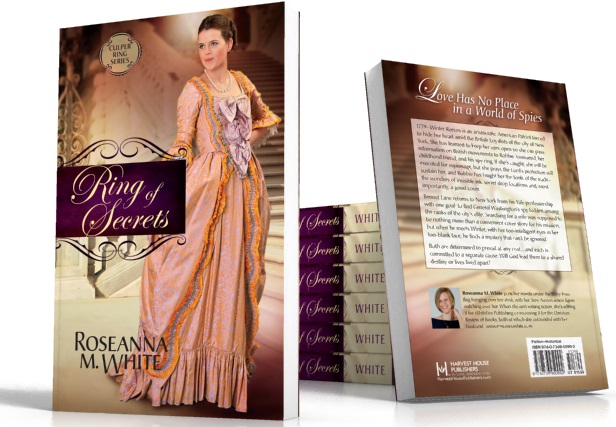 Ring of Secrets follows the real-life exploits of the historical Culper Ring, which was a ton of fun. But as is my usual way, I explain the questions history leaves behind about those historical figures through my fictional main characters. And what I love most about it is the way it made me stop and ask, “Do I have what it takes to do what these everyday, normal people did? Do I have what it takes to be a hero?”

What advice would you give other writers?

There are a few things that have become clear to me over the years. First, your path is your own. Much as I want to be Francine Rivers, I’m not. I never will be. Much as I want the success of some of my other writing friends, there are no guarantees I’ll ever get it. But God put me on the path I’m meant to be on, the path that will best glorify Him. And that’s all that matters. Second, never give up. When one project isn’t finding the place you want it to find, shift tactics and work on another. And another. And another. Keep learning, keep working. Commit yourself to the long haul. And know that this isn’t a dream that comes true by luck. It isn’t an industry that leaves ego intact. You have to be willing to learn, to adapt, to move one…and to persevere.

My best friend likes to say, “Respect your dream.” That’s such a critical part of the perseverance. I’ve been submitting books to publishers since I was 14. Publication didn’t come overnight, and even with nine books out and four more under contract, I wouldn’t ever say I’ve “made it.” There’s really no such thing as “making it.” But I’m on the path. I’m living the dream. And I know that the journey is worth the journeying—and that really, there is no destination. So take hold of your dream with both hands, determine to flourishwherever God put you today.

Honor Him and the gifts He’s given you with the respect they deserve…and work hard to get where He’s pointing you next.

Thank you for being with us today, Roseanna! And now, a giveaway…

Roseanna M. White is generously giving away a copy of Ring of Secrets! Please enter using the Rafflecopter form below. (Due to the cost of international shipping, this giveaway is open to continental U.S. readers only–thanks for understanding!) 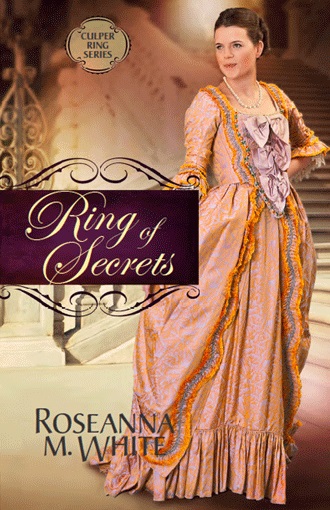