There was a valley, parched and dry. Even more unusual, this valley was filled with bones. Dry dead bones. A man named Ezekiel spoke to them. They attached first with sinews, formed with flesh, and then covered with skin. The man Ezekiel spoke again, and the breath of God filled them with life. They arose, a great army.

As Christians, so often we spiritualize this passage from Ezekiel 37.   The Lord certainly does use it as a great promise of personal resurrection life; however, there is also a literal interpretation.

The Lord explains the vision, telling us that this is the house of Israel, being restored to life in the land of Israel, something that has happened in the last 60 years.  The Holocaust left mass graves, filled with the bones of people who died for no other reason than their Jewish decent. The Lord took those who survived, who escaped, and through their hope, He built the nation of Israel. These people have warred to defend their nation ever since. Thus, they arose, a great army. 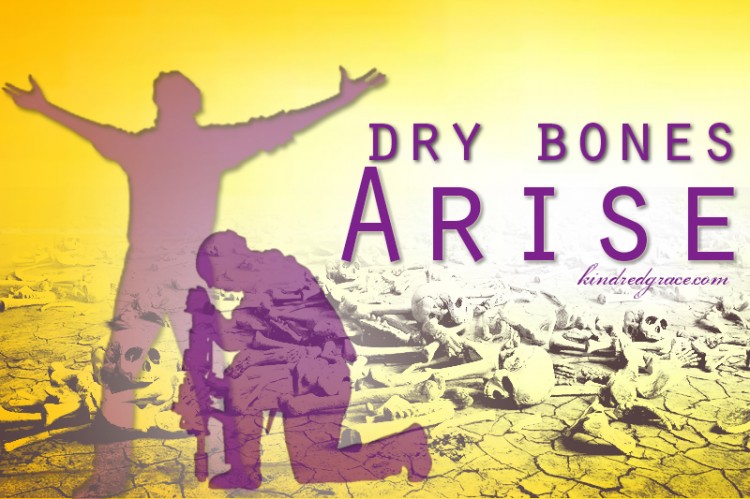 Every enemy in the natural and supernatural has sought their annihilation, even today. Why? Based on my study of Scripture, I believe it is because the formation of the State of Israel is one of God’s means of proving Himself holy.

‘Thus says the Lord GOD, “It is not for your sake, O house of Israel, that I am about to act, but for My holy name, which you have profaned among the nations where you went. I will vindicate the holiness of My great name which has been profaned among the nations, which you have profaned in their midst. Then the nations will know that I am the LORD,” declares the Lord GOD, “when I prove Myself holy among you in their sight.
-Ezekiel 36:22-23

For I will take you from the nations, gather you from all the lands and bring you into your own land.
v. 24

This is a threat to the enemy, so we war.

Perhaps one of the greatest acts of God’s protective hand on Israel became manifest in 1967, during the Six Day War. At that time, four nations, Syria, Egypt, Jordan, and Lebanon, simultaneously pre-empted an attack on Israel. In six short days,  Israel pushed the enemy back, and claimed territory that had not been in the hands of the Jewish people for 2,000 years.  This fledgling nation waged a few battles under the leadership of a man named Col. Eliezar Amitai, commander of the Jerusalem Brigade. Eliezar begot a son in the land of Israel, and Ofer became the first in their family line to know Yeshua HaMashiach, Jesus the Messiah. His salvation is evidence of the next part of the land covenant prophesies being fulfilled, salvation of the Jewish people:

After they return to the land, still in unbelief…

I will sprinkle clean water on you, and you will be clean; I will cleanse you from all your filthiness and from all your idols. Moreover, I will give you a new heart and put a new spirit within you; and I will remove the heart of stone from your flesh and give you a heart of flesh.
-Ezekiel 36:25-26

I feel  blessed to sit under Ofer’s leadership and teachings in our Kehilah. In Israel, the Messianic Jewish community prefers Kehilah, meaning community or congregation, to church, which carries a great deal of cultural and historical baggage from forced conversions and deaths during times such as the Spanish Inquisition and the Crusades. Church implies something from the outside, but Kehilah has an implication of solid indigenous Israeli worship, from the inside out.

And when we worship, do we worship! Hebrew voices lift up praise with Israeli dejembes and tambourines, in both celebration and mourning as the decedents of Abraham, Isaac, and Jacob look upon the one whom they have pierced (Zechariah 12:10).

Perhaps due to our pastor’s own inheritance as the son of a great military hero, or maybe because we embody the spiritual army who arose from the dry bones, worship feels like we are forging on in battle – waging war for the peace of Jerusalem, and Yeshua’s return. It is not uncommon for our Kehilah to end a teaching early, or to stop in the middle of musical worship in order to gather together in small groups for intercession, as the Lord pours out a spirit of grace and supplication (Zechariah 12:10).

The numbers of Messianic Jews in Israel is hard to determine, as many wish to keep their identity concealed. Estimates range anywhere broadly from 10,000 – 20,000.   In our particular congregation, we number about 60 regulars in our meetings, composed mostly of Messianic Jews, both immigrants and native born Israelis, as well as gentile Christian volunteers, serving in Israel from all over the world. A mentor of mine once commented, “We’re a small body, but a powerful one.”

I have often thought of her words, reflecting on the last few years of personal struggle. If not with the daily difficulties of living interculturally, then certainly the more specific challenges of being diagnosed with a brain tumor last year; or a very sick pregnancy during times of war in present day – I haven’t felt powerful. I have felt weak and needy. I have been dry bones. I know that I cannot breathe without God, but I also know that His Word says, when I am weak, He is strong.

Thinking on the words of my mentor, I believe that is what she means.

Many Messianic Jews are faced with a grave choice: family or Yeshua. When they choose Yeshua, it often severs relationships. In hope, a full reconciliation will take place, but not quickly, and not always. Having grown up in the Bible Belt from a solidly Southern Baptist family, this vastly differs from my experience of a community rejoicing at my salvation. My Messianic Jewish friends walk out this family struggle on top of facing the difficulties of pioneering in a young nation. They know the high cost of serving the Lord.

Likewise my Jewish neighbors also know the cost of living in the land. With compulsory military service, 80% of the Israeli population has served in the Israeli Defense Force. My husband included. I once met a man who shared with me that he had fought in five wars!

Combine the trials of life with a form of persecution unique to the region, and it surely brings forth a powerful body — a body dependent and surrendered to God, a body that knows we live for more than today.

What a joy to look upon the topography of this nation, and to not only see land and politics, but to see the Lord’s prophetic word actively being fulfilled. Dry bones have become a great army and the Lord is still on the move. Amidst the struggles, I see a people who persevere and endure.   This inspires me daily as I wrestle with my own personal battles. I am thankful to be part of this great army, preparing the way for the day He will walk here again, in His own resurrected flesh.

blogger at Growing an Olive Tree
Raised in ballparks across America, and trained as an Architect, Callie Mitchell is now living in Jerusalem, Israel with her loving husband, Devin, their son Aviel, and daughters Lydia, and Eliora.

Lover of Yeshua, American/Israeli Citizen, Architect, Designer, Illustrator, Writer, Thinker, Maker, Wife of Devin, Ima of Three Littles, Baseball for Life.
@Wade_Burleson @jdgreear I'll be honest that I was skeptical but JD has done so much more than I expected already.… https://t.co/pkIZD2f0Xm - 1 year ago