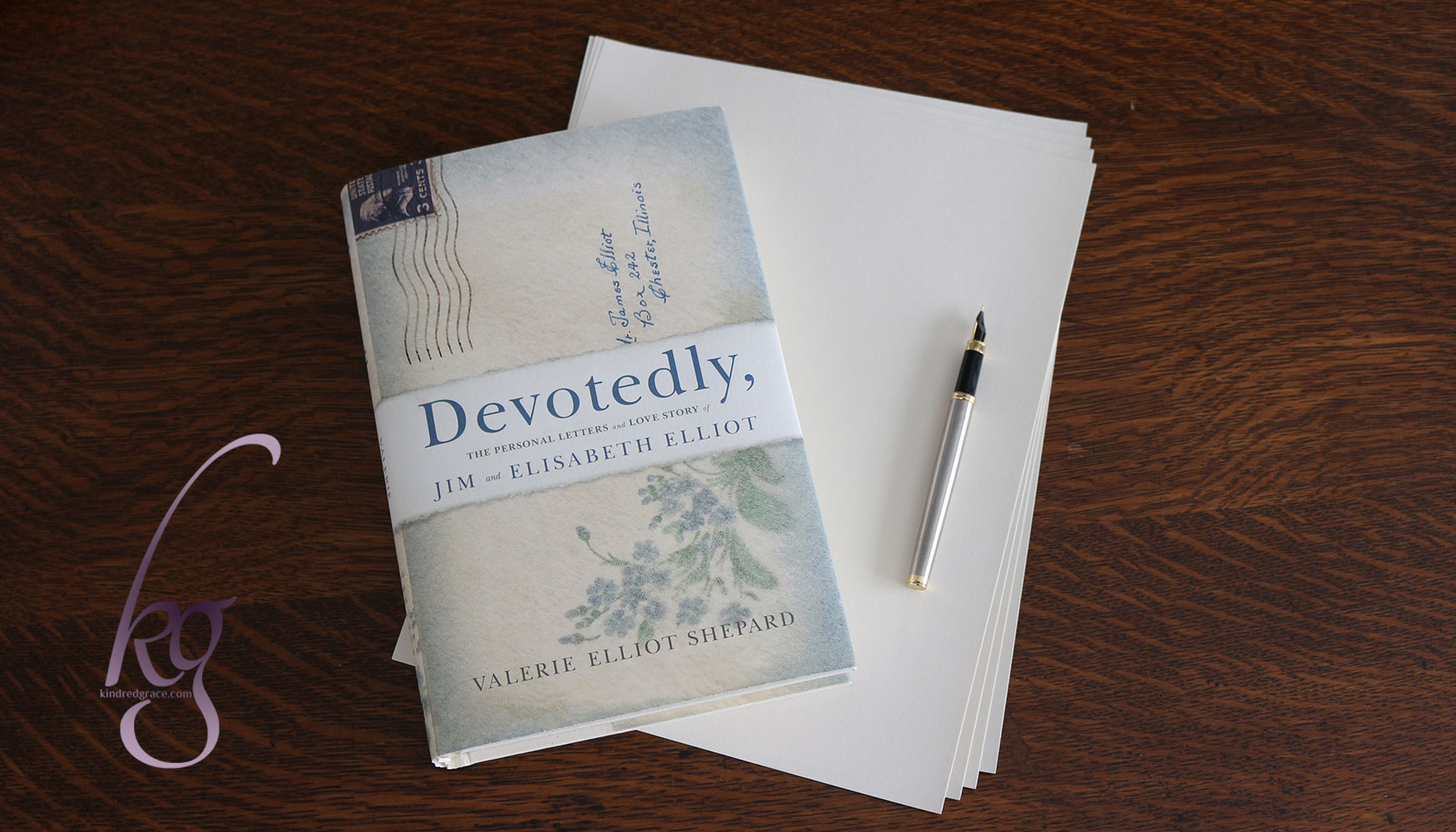 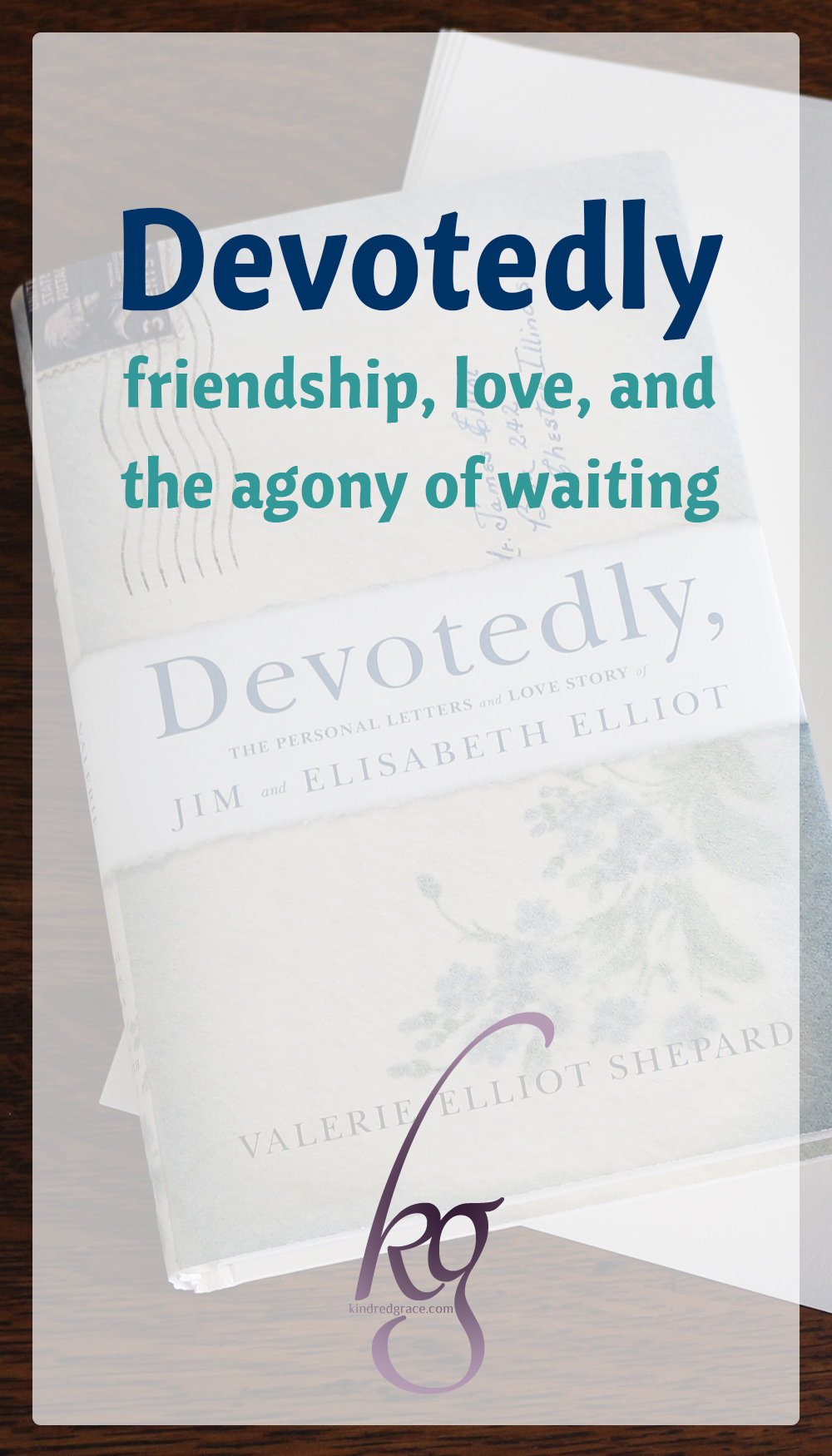 “Let not our longing slay the appetite of living.”

Jim Elliot’s words in a letter to the girl he wanted to marry would become famous when he was slain just a few years later, a martyr at 28 years old.

He waited to propose, believing he was called to be a single missionary. They had only two years and three months together as husband and wife. I can’t help but wonder if she ever felt cheated, ever asked why. Was their waiting needless? What would have been wrong with them marrying sooner, as so many of their friends and fellow missionaries did?

Elisabeth Elliot weaves bits and pieces of their love story throughout candid advice to singles in her book Passion and Purity. The book was first published the year before I was born, but quite timely when I read it as a teenager. I was captivated by Jim and Elisabeth’s love story sprinkled through its pages. I turned to The Journals of Jim Elliot hoping for more details, but I was always left with more questions. Was she ever frustrated with Jim’s conviction that he couldn’t get married? How did she react when she found out about Jim’s kissing escapades with other girls during his self-proclaimed “Renaissance”? How did she respond to his initial frank comments on her looks? How did she deal with his family’s criticisms of her personality? Did she choose Ecuador based on Jim’s call there?

No matter how many of her books I read, I could never quite satisfy my curiosity as to how two such opposite personalities made a lengthy long-distance relationship work. (And of course, if you’re familiar with Elisabeth’s speaking and writing, you know how she loathed that word “relationship” when used without the correct context.) But they did make it work. To such an extent that we’re still telling their love story seventy years later.

When I found out that Jim and Elisabeth’s only daughter had compiled their letters and journal entries to tell their love story, I knew Devotedly was a book I had to have. But I had no idea how it would grip my heart and mind, often moving me to tears, prompting me to highlight nearly every page.

The majority of the text is derived from the journals of and letters between Jim and Elisabeth. Their daughter Valerie Elliot Shepard has artfully woven their words together chronologically, setting the stage as necessary, or adding her own brief commentary and perspective on her parents’ story. The book is organized by years and seasons, enabling us to more fully grasp the length of their courtship, the tenacity of their resolve to wait upon God’s leading.

Devotedly lets us listen in on a love story that is beautiful in its own right. But when you consider that it was the love story of two people who would become world-renowned missionary heroes, it’s an amazing opportunity to glimpse some of the tests and trials that would purify their love and strengthen their faith.

We hear their humanity, yes. We see their very real frustration with each other, at times. The ups and downs and unknowns as they waited on God for direction. We watch them each lay out a fleece time and time again and then delight when God graciously makes His answers so very clear. We see them wait, with no freedom to go any further, on the matter of their “uncommon friendship.”

But what Devotedly makes so very clear is that Jim and Elisabeth were two very ordinary human beings with passions and sins common to each of us. Two ordinary people who prayed fervently for an unordinary hunger for God. Two people who looked purely to His Word for guidance. Two people who loved each other passionately but loved God more.

Their daughter Valerie observed that it was unlikely her parents would have stayed in touch if her father had not made his feelings known when he did, that Memorial Day weekend 1948. I wonder if one reason God led them the way He did was so that, all of these years later, we would have their story of devotion–forged through five years of trial and tears, as they waited on God.

Their priorities were clear, from the beginning. Each of them had built what they called a “code” for their life around specific passages of scripture. Elisabeth based hers on 1 Corinthians 7 and Isaiah 54. Jim derived his call to remain single from Matthew 19:12. There was no question that the Lord always came first in their lives, each of them “more concerned about the other’s conformity to God’s will.”

“I would rather be blotted from his thoughts forever than for one moment to stand between him and his Lord, or weaken his power with one soul.” (Elisabeth)

From the beginning, Jim’s forthrightness would set the tone for their friendship. “We’ve got to get squared away how we feel about each other,” was the revelation that yes, he did feel something for her. Their “transparent honesty” would make the next five years ones of iron sharpening iron.

“I trust your understanding of me—an understanding forged in the furnace of distance and long silences. The trial of separation has made us one in a way the pleasure of association could never have done.” (Jim) 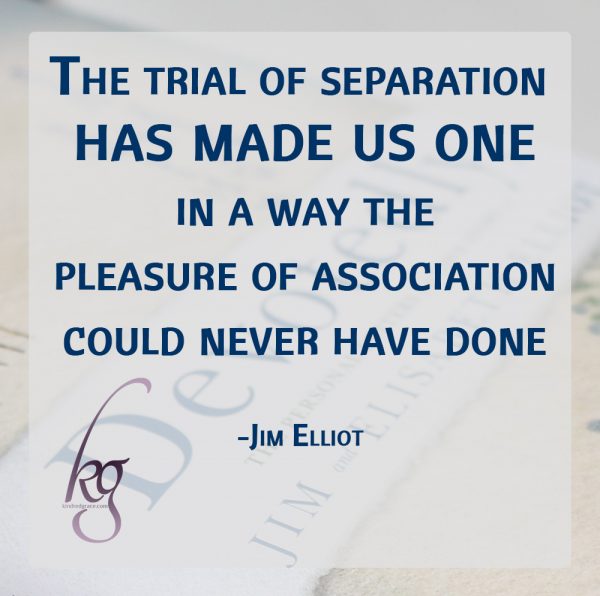 No matter what they were going through, Jim and Elisabeth’s letters and journal entries were peppered with praise. Even when they did not know if they would ever have the freedom to marry, they gave thanks for each other and for how God was working in the other’s life.

“I believe that perhaps the most effective ‘balance wheel’ in a believer’s life is just this. In each event of life, we are to give thanks.” (Elisabeth) 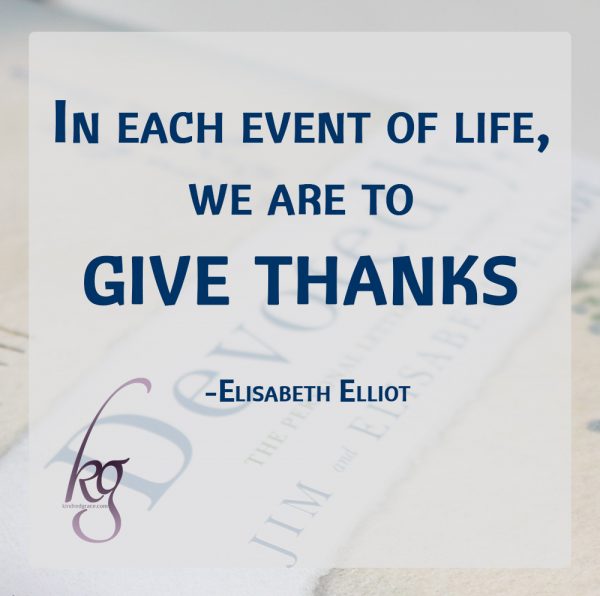 These two young people labored earnestly in prayer. Their journals spoke of hours on their knees, in their prayer closets, wrestling over matters with the Lord, begging Him for direction.

“They weren’t merely seeking His personal instruction in regard to their ways, though they desperately craved it. They were equally, if not more diligently seeking to discover only His ways, which would ultimately give God the glory.” (Valerie)

Each of them often quoted Sara Teasdale’s line, “But how can I give silence, my whole life long?” While Jim’s impetuous personality seemed to give him more freedom to speak, he still did not feel the Lord giving him freedom to propose. Elisabeth, meanwhile, felt she must keep some of her feelings to herself until they were engaged–and most definitely would not talk about their relationship with her friends.

“Call it silly if you will, but to me, these things are high and holy, not to be lightly spoken of, and as yet, so far as our relationship is concerned, it is not ours to banter about, but His entirely, in His hands, until He may see fit to give us to each other. Then, and only then, may we feel free to speak of it to anyone, without fear of equivocation.” (Elisabeth)

It was clear Jim and Elisabeth viewed God’s Word as their ultimate source of strength and wisdom, often exhorting each other not to neglect diligent Bible study. There would even be times that letters would cross in which they both wrote of how God was speaking to them from the same passage.

“The only thing that keeps me stable and settled in these days of uncertainty—yea, utter perplexity—is the absolute dependability of God’s Word.” (Elisabeth) 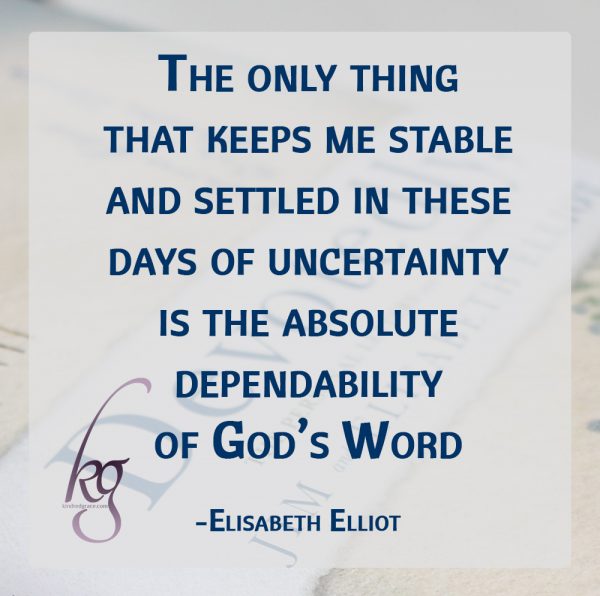 Their own words make it clear that the surrender of their dreams was not easy. But they believed that their suffering and sacrifice was for the sake of furthering the Gospel, and they were willing that it should be so.

“How easy it is to give place to myself, my own moods and feelings. The Lord save me from belonging to the Order of the self-pitying. No man hath a velvet cross.” (Elisabeth) 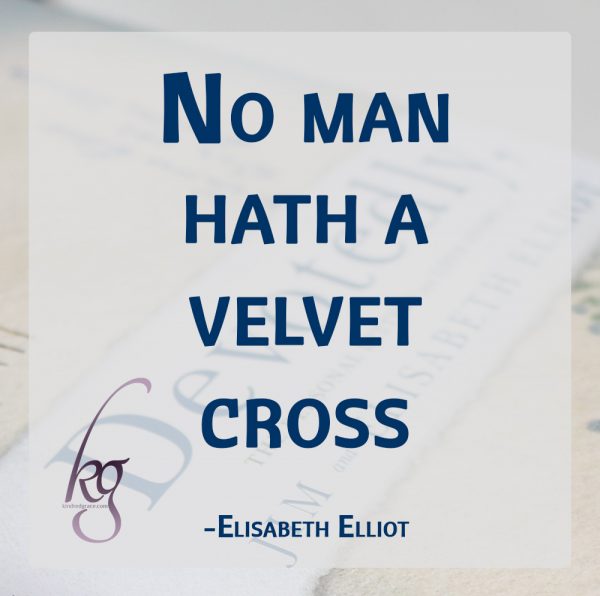 Their relationship was characterized by waiting. “An agony of waiting,” “waiting, watching, praying,” “the uncertainty, the waiting, the wondering,” “waiting is living these days”…the word “waiting” recurs over and over in their journals and letters. And yet, it was in this “active waiting” that their faith was tested and tried.

“I know He is working, and has purposes for which I know nothing, but it takes faith—and I’ve found that this means active, operative, continued faith and faithfulness.” (Elisabeth) 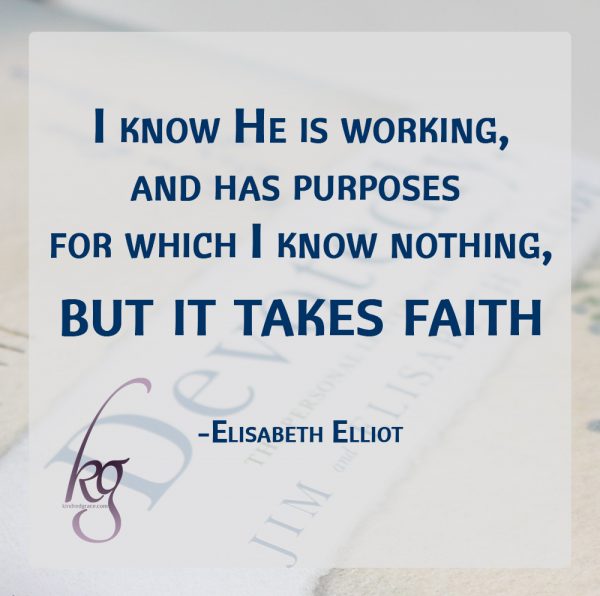 Jim’s letters and journal entries praised Elisabeth (“Bett” as he called her) over and over for her restraint. Once they were engaged, he felt he might enjoy “further liberty with her body”, but Elisabeth determined to set stricter boundaries. And he was grateful!

“Oh, how glad I am she knows just how much of herself to give….” (Jim)

Jim and Elisabeth were honest in their journals–and to each other–about how hard it was to watch their friends get married when they had not yet been given the freedom to do so. And yet, they understood–as must we in reading their story–that God leads each one individually.

“He calleth His own sheep by name, and leadeth them out.” So His merciful and miraculous leading is individual—“Thou (singular) shalt remember all the way which the Lord thy God led thee.” The temptation is great to imitate or to expect the same manner of guidance which God has given another. “What is that to Thee; follow thou Me.” His Word abounds in examples of His separate leading of His sheep. (Elisabeth) 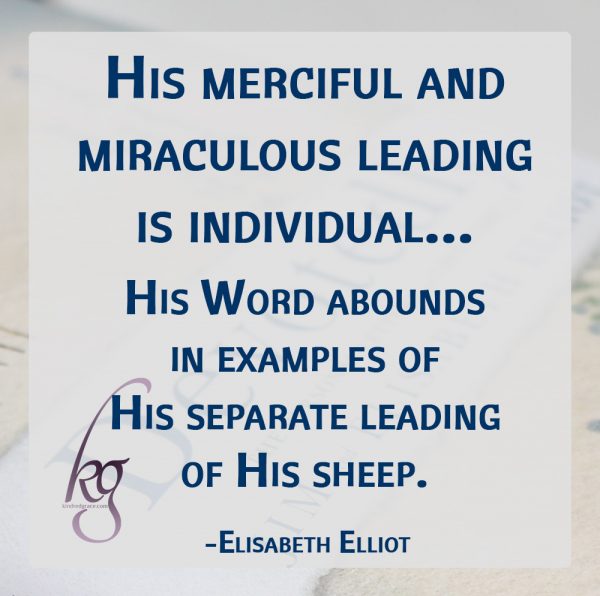 In Devotedly, Valerie is finishing the love story that Elisabeth told in brief in Passion and Purity.

Instead of feeling like snippets used for purposes of illustration, Devotedly gives us a more complete picture of how Jim and Elisabeth fell in love and finally married. It’s not an exhaustive account of their lives together (there are many more books to complete that picture!), and in fact there are aspects of their love story that even Valerie couldn’t track down (a missing period of her mother’s letters to her father left much to surmise about what he was replying to). I found it interesting to refer back to Passion and Purity while reading Devotedly, comparing how Elisabeth had written of a situation in retrospect with the way she recorded it in her journal as it happened.

Devotedly is compiled by a daughter who honors the memory of her parents while sharing honestly the details she finds in their letters and journals. In many ways, we see Valerie’s own quest to get to know her father better through her research. While many of us have felt a fascination with the Elliot’s love story through the years, Valerie’s own interest must eclipse that of all of us who have respected her parents from afar!

When all is told, Devotedly is really just the story of two people passionately in love with their Savior and purely devoted to serving Him above all others.

“Don’t think of my parents as perfect. They’re weren’t. Don’t think of their relationship as perfect. It wasn’t. See them as two people—a man and a woman—who willingly invited God to direct their lives His own way. God is the One doing things perfectly here in their story, even amid disaster, even after many years of testing and waiting, of separation and struggle.”

Many thanks to LifeWay/B&H Publishing for providing us with review copies of Devotedly!