I had been called many things, but “traitor” had never been one of them. Until that day at the orphanage in Haiti when those hurting children took their anger out on me. I crawled crying into my parents’ bed that night and I remember them saying, “They probably don’t even know what that means.” And I told them that it hadn’t been in English. They told me in their own tongue.

I had never been called a “know-it-all” until that day at the coffee shop when one friend confided in me that that’s what the other girls were saying and they just didn’t want me around because of it.

I had never been called “judgmental” until we were sitting in that car, tears streaming down my face and I said that I loved our friendship, but that obeying scripture was more important to me.

And maybe those names don’t matter. Maybe they’re “just words”, but try telling that to me when I’m lying awake in bed at three o’clock in the morning wondering how I can feel so very alone in such a full house. Try telling that to anyone who has ever lived, for words are not “just” anything. They are sharp and tenacious and heavy.

Woman may be “the weaker vessel,” but she’s crafted the deadliest weapon.

Since the world began, women + words has been a lethal combination. Adam and Eve were equally responsible for their individual sins, but we cannot ignore the suggesting, nagging, pleading words of a woman who didn’t want to be alone in her decision. (Adam, likewise, used words to place all the blame on Eve a few verses later!) 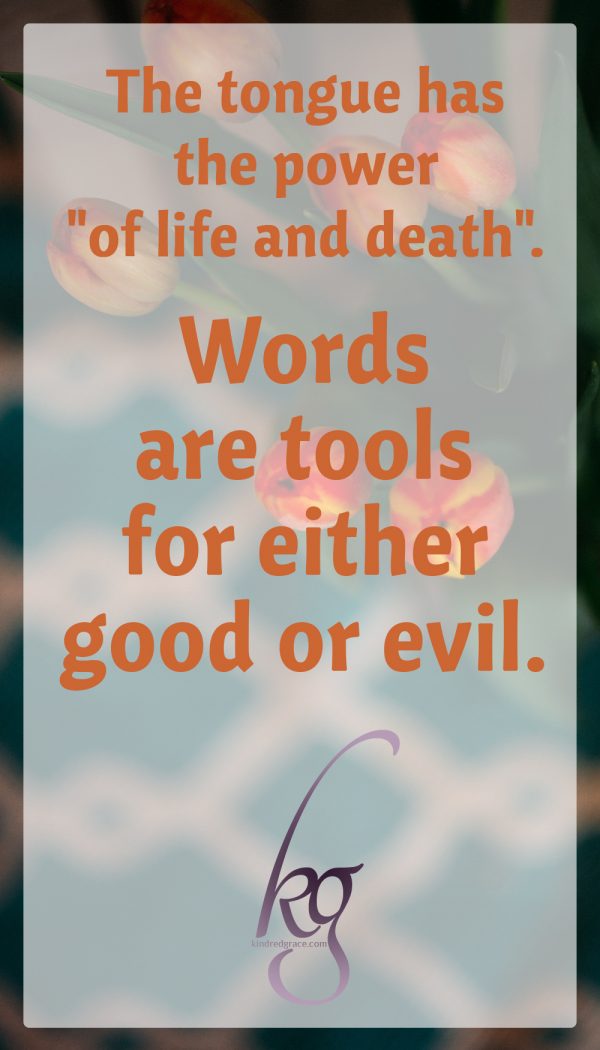 The tongue has the power “of life and death” and words are tools for either good or evil.

Like a rock hoisted above Cain’s head, or a tent spike in the clutches of Jael, we take our words and weld weapons from them and use our voices for destruction.

Remember: woman was made in God’s image. That means that we have some of God’s nature. We create, as God created. We give life, as God gave life. We do so with our bodies, our hearts, our words. (“And God said, ‘Let the earth bring forth living creatures…'” Genesis 1:24.) But from just after The Beginning, we have fallen into the ways of Satan. Satan uses words too and he does so very well. He was the craftiest  creature in the garden and he’s crafty today: winding and twisting words until they aren’t life-givers anymore, but life-stealers. He uses words to deceive, tempt and discourage, and he’s taught us to do the same.

My sister recently confided in me that one of her biggest struggles in her marriage is to resist the temptation to use words to manipulate her husband. She can communicate better, argue faster and persuade with ease. It’s difficult not to use her words for selfish ambition because it is so natural for her. And the same goes for me, and probably you.

Maybe you were called “fat” or, like me, “anorexic” (which I wasn’t). Maybe you were called ugly, weird or stupid. And then there are words we don’t realize hurt so much. Overheard words like “needy,” “desperate” or “pathetic.” Words that make us feel that, no matter how hard we might try, there is nothing that could get us away from our past, our personality, our body type. Nothing that could get us far enough away to shake that feeling of lacking, to peel that name tag off once and for all.

Because we have all been hurt by words, we should know better than to do the same to others, and yet we do so, time and again. And if you’re like me, you’re doing so to those you love most.

We don’t do a lot of name-calling my house, but that doesn’t mean that I’ve never used a word as a weapon. Far from it, I’m afraid. Half-truths, emotional ploys and cut-downs have been my language. Even just a sharp, “Not now!” can send someone spiraling into a twister of questions. “What did I do wrong? Doesn’t she love me? Am I the problem?”

“Does a spring pour forth from the same opening both fresh and salt water?” (James 3:11)

Words wound. Don’t deny it. Don’t hide from it.

Don’t tell me that “sticks and stones may break your bones” because I know you’d choose a snapped wrist over a punctured spirit any day. A wrist you can wrap up, give a little time and find useful again. The pains of a harsh word could come back every day for a year and then again when you think you’d forgotten, just for good measure.

It is time to stop the war of words.

Time to start using them for what they were meant for: life and joy, encouragement and humor, comfort and hope! Think about it. If you had your words in check, what other things would swing into their rightful orbit?

“…if anyone does not stumble in what he says, he is a perfect man, able also to bridle his whole body. If we put bits into the mouths of horses so that they obey us, we guide their whole bodies as well.Look at the ships also: though they are so large and are driven by strong winds, they are guided by a very small rudder wherever the will of the pilot directs. So also the tongue is a small member, yet it boasts of great things.” (James 3:2-5)

The trick, I wish, was some as-seen-on-TV tongue bridle. You’d slip it on in five easy steps and never say a regretful word again. But it’s not so, my friends. Thankfully, there is a cure, but it doesn’t start at the tongue. It starts at the well of thought. It starts at the heart. As James asked us a couple of thousands of years ago, “Does a spring pour forth from the same opening both fresh and salt water?” Of course not! So then, if your heart is full of selfishness, envy, anger, there is not room for any pure words and your mouth will be an opening in that spring.

“But if you have bitter jealousy and selfish ambition in your hearts, do not boast and be false to the truth. This is not the wisdom that comes down from above, but is earthly, unspiritual, demonic. For where jealousy and selfish ambition exist, there will be disorder and every vile practice. But the wisdom from above is first pure, then peaceable, gentle, open to reason, full of mercy and good fruits, impartial andsincere. And a harvest of righteousness is sown in peace by those who make peace.” (James 3:14-18)

You can’t find peace? Make some. Make some with your life-giving voice.

Write that letter you’ve been needing to write. Say the words you’ve been trying to say. Weave a word of encouragement.

Most of all, dive down deep and make sure the well is pure, all the way to the bottom. If there is anything in there that needs prying out, go to the Father. He will be faithful and your spring will bring joy.

Dive down deep and make sure the well is pure, all the way to the bottom.
Click to Tweet