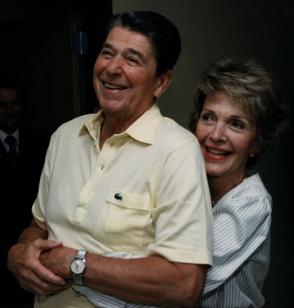 “I knew that being his wife was the role I wanted most,” said the actress. She knew she was called to be Ronald Reagan’s wife, and he was her first priority. “He was her career,” wrote Ann Gerhart in a Washington Post article.

In return, President Reagan viewed Nancy as his “respite at the end of the day” and said she was the one who could make him lonely just by leaving the room.

Because it was her ambition, Nancy Reagan discovered the secrets to a successful, happy marriage: she respected, protected, and adored her man.

The Reagans exemplified the principle that Dr. Emerson Eggerichs outlines in his book Love and Respect: “A husband needs respect like he needs air to breathe, while love is by far a wife’s greatest need.” In fact, the principle didn’t originate with Dr. Emerson or the Reagans—it comes from Ephesians 5:33, “Each individual among you also is to love his own wife even as himself, and the wife must see to it that she respects her husband.” And as my grandmother Jessica Brink says, speaking from fifty years’ experience, “When a husband loves his wife as he is supposed to, it makes it very easy to be a submissive wife.”

Nancy Reagan respected her husband, and in turn, he loved her back. It is when the needs for love and respect are not met that a vicious cycle starts—a wife doesn’t feel loved so she doesn’t treat her husband with respect and her husband doesn’t feel respected so he doesn’t show tender loving care to his wife. In the Reagan household, it got really quiet when things weren’t right between “Ronnie” and “Mommie.” But it was a rare occurrence, and the Reagans didn’t stay in that vicious cycle for long, according to those who knew them best.

“Unlike so many wives who are always criticizing, always asking their husbands to change, she loved him just the way the he was,” noted Myrna Blyth in a National Review column. I think that is the secret to respecting your man: never criticize him, even in a joking manner. Much is made of the male ego, but for my part, I don’t mind feeding it. (And I would rather it be me feeding my man’s ego instead of another pretty woman!) A man with a wounded ego is not pleasant to be around, but a man whose ego is faithfully fed by a loving woman is the most content and caring man in the world. 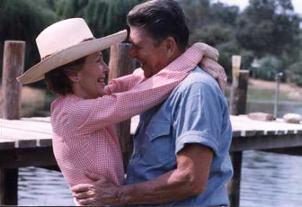 Elisabeth Elliot once wrote, “I have found that a man will usually be as much of a gentleman as a lady requires and probably no more.” But to take a spin on that, I have found that a man will live up to his woman’s expectations of him. A wife’s simple trust in her husband has more effect on him than she may realize, but as Dr. Laura Schlessinger says, “The woman, who knows that and is wise enough to use that power benevolently will have a happy life.”

I’ve often heard the story of a businessman and his wife who are traveling back through her old hometown. They stop at a gas station and find her old boyfriend, still pumping gas. The businessman tells his wife, “Now aren’t you glad you married me and not him? You could’ve been the wife of a grease monkey!”

She responds, “No, if I had married him, you would be pumping gas, and he would be the millionaire.”

Country star Travis Tritt sings, “I can do anything with her here beside me, leaning on her is where I make my stand. Where we would be without the love of a woman, standing behind her man even when he’s wrong.” In the same way, Nancy Reagan stood behind her man, even when she disagreed with his policies or found his stubborn determination frustrating.

Nancy Reagan believed her husband could be president of the United States. And many, including Rush Limbaugh and Reagan’s chief of staff Michael Deaver, are of the opinion that Reagan couldn’t have done it without his wife’s confidence, support, and devotion.

But I don’t think it made a difference whether Ronald Reagan was a struggling actor, a GE commentator, the governor of California, the muddy rancher, or the president of the United States— Nancy respected him no matter what. She thought of him as a great man—rancher or president, the title didn’t matter. In fact, I would guess that she enjoyed most the times when he was on the ranch, and she had him to herself. 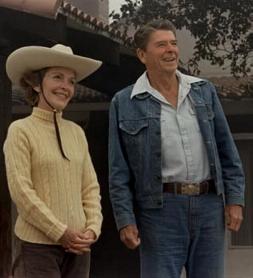 “Standing up for her man was second nature to Nancy Reagan,” wrote Michael Deaver. She was described as her husband’s “most important ally.” Nancy Reagan cared little what the press did to her image, but say something derogatory about her husband, and she became the “peewee powerhouse” her husband dubbed her (and sometimes the “dragon lady” the press called her).

I think that the instinct to protect your man stems directly from the respect you have for him. Nancy Reagan was once known to turn to the people in the airplane behind her and practically shout, “That’s my husband you’re talking about! You don’t know what you’re saying.” She proceeded to inform the men that if they would watch her husband on television that night they could learn the “real story” on the budget. Because she respected her husband entirely, she protected him unfailingly.

In the White House, saying the wrong thing to the wrong person means leaks to the press that could tarnish your husband’s image forever. At a farm house, the newspapers might not care what you say about your man, but your children sure do: it directly influences the way they view their father. Nancy Reagan carefully guarded her husband’s public image. I want to do the same with the “public” of my mother and friends. Nancy never disagreed with her husband in public. Her silent presence by his side was always affirming, always assenting to what he did and said. They had their private disagreements in their public years, but in public Nancy only ever sang his praises, and never whispered a word of his weaknesses.

In the later years, when Alzheimer’s was stealing away the great qualities of the man she’d always loved, Nancy Reagan continued to protect his dignity and guard his privacy even more. Her husband was losing his memory and his ability to do simple tasks, but she wanted America to remember him as the great leader, “The Great Communicator.”

The Reagans were a couple who hated to be the last one to say goodbye on the telephone. They would each say goodbye at least half a dozen times, each more softly than before, until finally an observer would see President Reagan hang up the phone carefully, “as if it were made of the finest crystal.” But Mrs. Reagan was forced to say the final goodbye of their marriage. She wrote, “ Alzheimer’s is a truly long, long good-bye. But it’s the living out of love.” 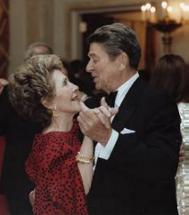 Known as “The Stare” or “The Gaze,” it was that rapt look of adoration upon Nancy’s face as she sat listening to her husband’s speak. Yes, she’d heard the same speech before, and that joke was probably an old favorite of his, but her enraptured gaze never faltered as she took in his every word. The press made fun of it. Feminists mocked it. Few knew how genuine it was. But the unswerving adoration Nancy Reagan had for her husband was one of the secrets to their very happy and successful marriage of 51 years.

I love to thumb through the pages of the commemorative magazines that were published after Reagan’s death. Their love and adoration for each other is visible in every picture of Nancy and her “Ronnie,” as she loved to call him. In an introduction to one such book of photographs, Patti Davis wrote that she saw her parents “as people who nurtured their love for each other every day, who knew that friendship is the mortar holding love together, who closed their eyes when they kissed, and who held hands like teenagers…”

As Myrna Blyth wrote, “What we were watching, of course, was a love story, the real thing, starring a woman who didn’t mind being ‘the woman behind the man,’ not because he was a great man (which he was), but because she truly adored him.”

Nancy Reagan knew her place—it was the woman behind the man. Though a famous actress in her own right, she gave up her career to play the role she wanted most: Mrs. Ronald Reagan. A Time article criticized her for doing things “the old way, through the man.” But Nancy felt it a rewarding task to simply love her man. She never sought the limelight; she was content to bask in her husband’s shadow.

In the words of The Lone Ranger, “A man could have the world with a fence around it, and if he didn’t have a woman like that he wouldn’t have anything.” 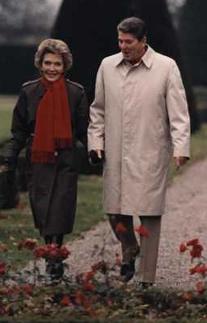 Whether I become a first lady or a farmer’s wife, I could ask for no greater acclamation than “She just loved him!” and no greater reward than my man’s love. 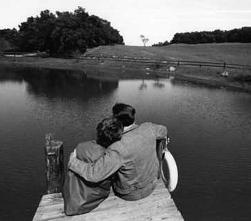 In Michael Deaver’s book Nancy, he recounts a story passed on by one of President Reagan’s Secret Service agents. They were leading the failing president on a walk down Beverly Boulevard in Beverly Hills in 1999, when President Reagan stopped in front of a quaint blue house. A rose garden bloomed invitingly beyond the white picket fence. The President tried to unlatch the gate, when the agent gently reminded him, “We can’t go in there, Mr. President; it isn’t our house.”

President Reagan paused and quietly said, “I know, but I just wanted to pick a rose for my love.” 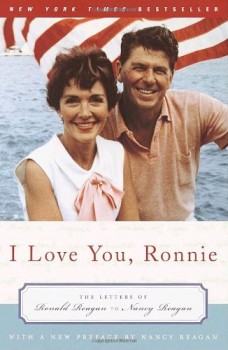