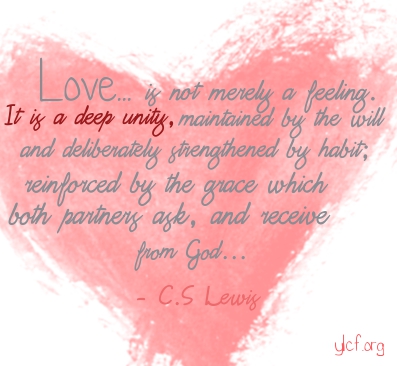 It all started with re-reading old chats and e-mails from Aaron’s and my courtship and engagement days.  A couple we know well is in that oftentimes tumultuous season and it made me want to “re-live” ours.  One night, while Aaron was busy with something else, I spent an hour or so just reading the old chats and e-mails that we had exchanged.  It was fun and brought back many lovely memories from that hard but beautiful time.

But then the next day, between the into-everything toddler and the fussy baby, all the housework and the working-hard husband, I started to get discontent.  Why isn’t it like the way it used to be?  Back when we were so completely focused on each other and told each other “I love you” every ten minutes or so (really, if anyone else ever read our old chats…!!).

Now, what little time we have together in the evenings is spent taking care of our little ones, cleaning up from supper, and catching up on anything that didn’t get done during the day.  It seems that we’re always tired, from a toddler who wakes up very early and a baby who is having a hard time with teething.  I started over-thinking it all and wondered, what on earth had happened to our love?

Several nights later, we got home late, with two littles who should have gone to bed much earlier.  My husband and I worked together as team getting them ready for bed, and once they were asleep we dropped exhausted into our own bed.  As we lay there, too tired to do anything more than hold each other, tears came to my eyes as I realized…this is it.  This is what true love looks like in this season of my life.  What had happened to our love is that it had grown…and changed..and deepened.

In his book Mere Christianity, C.S. Lewis puts it so well:

“Being in love is a good thing, but it is not the best thing… It is a noble feeling, but it is still a feeling.  Now no feeling can be relied on to last in its full intensity, or even to last at all… And in fact, whatever people say, the state called ‘being in love’ usually does not last.

“If the old fairy-tale ending ‘They lived happily ever after’ is taken to mean ‘They felt for the next fifty years exactly as they felt the day before they were married’, then it says what probably never was nor ever would be true, and would be highly undesirable if it were.  Who could bear to live in that excitement for even five years?  What would become of your work, your appetite, your sleep, your friendships?

“But, of course, ceasing to be ‘in love’ need not mean ceasing to love.  Love in this second sense — love as distinct from ‘being in love’ — is not merely a feeling.  It is a deep unity, maintained by the will and deliberately strengthened by habit; reinforced by (in Christian marriages) the grace which both partners ask, and receive, from God… ‘Being in love’ first moved them to promise fidelity: this quieter love enables them to keep the promise.  It is on this love that the engine of marriage is run: being in love was the explosion that started it.” (emphasis mine)

originally published at Something Simple

Blogger at Something Simple
A wife and mama who loves her life of learning to know her Father, loving her amazing husband and babies, and keeping her little house amidst the green.

1.1KShares
1.1KShares
We use cookies to provide you with a more personalized experience during your visit to Kindred Grace. OkayLearn More