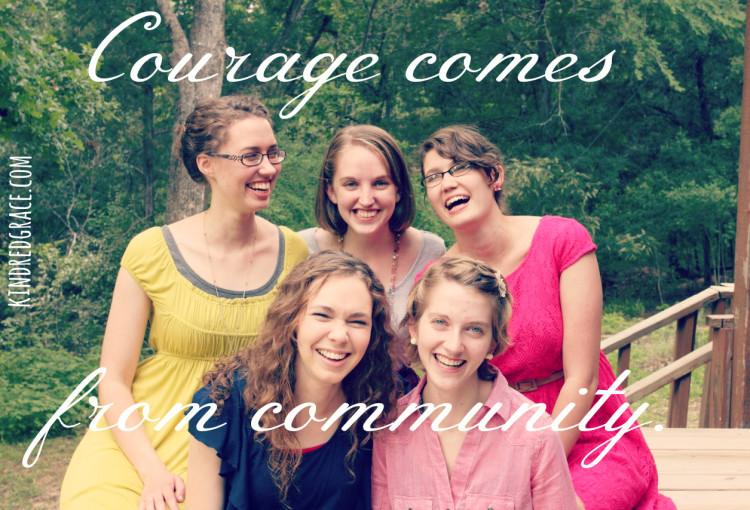 When I was first told that I had the gift of encouragement, it sounded kind of frilly. Why not something more powerful, like healing or teaching or speaking in languages I’ve never learned? I wanted to be on the front lines of the spiritual battle, not sitting on the sidelines patting someone’s hand and telling them their hair looked pretty. It took me a while to “grow into” my gift, but once I did, I came to a very different conclusion.

Encouragement isn’t just complimenting people and making them feel good about themselves. As a matter of fact, if that’s part of encouragement at all, I don’t think I got that part, because I’m not great at giving compliments, especially fake ones. Encouragement as a spiritual gift is something bigger than that. All of our gifts and abilities are from the Lord, so it’s not for me to say what is a “spiritual” gift or not, but encouragement is specifically mentioned in scripture (Romans 12:8, also called “exhortation”) and, like all gifts of the Spirit, it carries the power of God.

Let’s think about the actual word for a moment…encourage. It’s much like the word empower. The definition literally means, “to foster courage” in someone else. When you think of it that way, it’s actually quite a big job. If you think about those on “the frontlines” (who do the more “exciting” work) you think of courageous individuals, but their courage doesn’t just come from a bottomless well somewhere inside them. Courage comes from community. Courage comes from people who believe in each other.

I wrote before about how I am driven by words, and that has never been so evident as in my own wordy profession. When I first began blogging, I had the same fear we all have. “Nobody’s going to read this but my mom.” It was the first comments that gave me the courage to write the second posts. As my blog grew, little-by-little and my writing matured, I still had many doubts. Will I regret writing this stuff when I’m older? What if I offend someone with what I say? Is there any point in giving my opinion on this? It was those return-readers and those little emails that read “I can’t wait to read what you write next!” that kept me going.

Of course, we cannot write or do anything else simply for the praise of others, but we can gain the courage to do things for God because of the encouragement of others.  As Mother Teresa said, “Kind words can be short and easy to speak, but their echoes are truly endless.”

I cannot count the times that I’ve felt like giving up, but haven’t because of the courage-giving words of a friend. Writing this post inspired me to go back and find some emails that I remember as having a great effect on my pursuit of writing and living for Christ. A message from an older blogger in 2007 might be one of the greatest nuggets in my inbox. That was the year I started blogging (at age fourteen!) and Heaven only knows if I would’ve made it even as far as 2008 without her kind note. I can only hope that I can be that person to someone today, tomorrow and the next day. A person who uses her words to give courage.