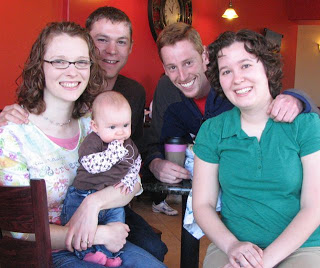 I’m so thankful that we’ll have an eternity in Heaven to fellowship with other believers. Our times together with other kindred spirits here on earth are altogether too short. We hadn’t even finished our mochas and teas on Saturday before Merritt and I were saying goodbye to Garret and Melinda. (In fact, Melinda’s tea was still too hot to drink.)
Grandma’s 80th birthday party took us to Melinda’s hometown this last weekend. Though we live in neighboring states, it’s still almost a 10-hour drive. So even though we knew it would be quick, we had to get together to say hi. Melinda directed us to meet them at this “delightful little coffee shop”. Merritt and I followed Google Map’s directions implicitly, turning around multiple times to find the Avenues South instead of the Avenues North (reminding us muchly of a trip with Phillip and Lanier where following Google meant many turn-arounds as well), and when we finally found the right 3rd Ave, we parked in front of an empty building with signs saying “thank you for the 8 1/2 years of business.” It wasn’t the fault of Google Maps. It was the right coffee shop. It was just permanently closed.

I called and left a message on Melinda’s cell phone. She called back mournful that her favorite coffee shop was closed, but laughing that it would have been the perfect set-up for an ambush or something. When we finally met up at a (newly-opened) coffee shop a bit later, we ordered our coffee and tea (all of us except Ruth–she is a bit under-age for caffeinated beverages), and sat down for a quick chat.

Melinda and I go way back to days of the “Editor’s Circle”, when she was editor of Inkblots Literary Magazine and I was still publishing the YLCF Journal. Then years later we really bonded, as only girls can do, over our hair. As fellow “Curly Girls“, I was pleased to introduce Melinda to my soon-to-be curly daughter Ruth Ann. (Ruthie’s hair shows much promise of curling, but it’s a little short to do anything at the moment but stick up straight or lay down flat, unless well-oiled and gelled.)

After years of sharing magazine editing and curly hair tips, I finally got to meet Melinda face-to-face at Merritt’s and my wedding. And then her family came to visit our farm when Merritt was hopping around on crutches that first summer of our marriage. But we’d been planning another meeting for quite a while now, to meet her boyfriend Garret–whose leg we’d been praying for, with the experience of those who have been there.

A few cups of coffee and tea later, we’re back home, and wishing we’d had a whole day, instead of half a cup of tea, with Garret and Melinda. (I actually thought we might when our car broke down–but a local parts shop was open late Saturday night with just the right radiator in stock, and my amazing husband knew how to put it in–but that’s another story…) But we’re already looking forward to next time.

If the Lord tarries, it will probably be at another coffee shop or the next wedding. Otherwise, it will be sipping from those eternal cups of tea at the wedding feast of the Lamb.