It’s a prime buzz phrase of our generation, and a perspective shared by atheists and believers alike.  Assert the statement, “I hate religion” and you’re sure to gain a following.

The outcry is sincere, and the concerns are valid. A spirit of religion is plain mean. Antagonistic to freedom, and anti-relational in its nature, religion binds us in rules that strangle the true love, power, and grace found through the work of Jesus’ death and resurrection. Creativity is restrained, and intimacy with God is replaced by mechanical ritual.

This anti-religion stance was once my cause, too. In my liberal arts university days, I was aware of how religious restrictions and legalism hardened the hearts of my Bible-Belt-raised-non-believing classmates. Taking a clear stance against religion was an impassioned response to knowing that God was much more than rules and church, but rather a real and living Being who wanted to lavish us with His love, and set us free to love Him in return.

After some years of living in Israel, my perspective has changed. Not so much in my distaste for the stronghold of religion, but more in how I relate to the problem.

Living amongst an ultra-orthodox Jewish population, I regularly navigate the waters of ritual and religion through a cultural context. Even within the Messianic Jewish community, contending with the discrepancies of what is legalism, what is a cultural expression, or even a personal act of sanctification, is a regular event.

The Romans 14 passage that my university friends and I viewed interpretively in philosophical discourses on secular versus sacred, as well as practical and stylistic issues (to tattoo or not to tattoo), actually takes on its historical and literal meaning in Israel. Whether believers should eat pork or maintain the rabbinic tradition of separating milk and meat, become very real questions, applicable to living amongst community. 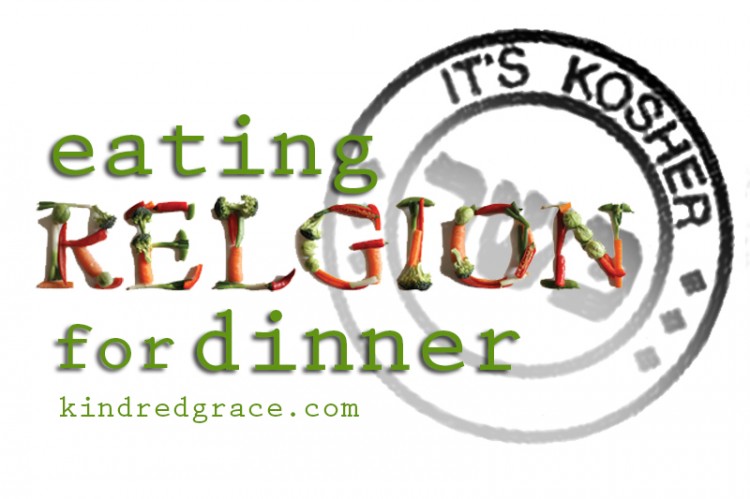 Judaism contains this beautiful tradition of Shabbat Dinner.   Each week, families gather together around the to table welcome the day of rest, with blessings involving candle lighting and sharing wine and challah, followed by a family meal.

My husband and I, enjoying the culinary arts, view Shabbat Dinners as a ministry opportunity, a way to exercise hospitality and promote community. We regularly open our home to guests to celebrate this mini-feast. One particular weekend, we invited a single friend and the young man she was dating. Fortunately, it crossed my mind to find out whether or not he had any dietary restrictions.

Slow to receive a response to my question, we moved ahead and decided on the menu: pesto pasta with chicken, roasted vegetables, and a homemade pumpkin pie. Plans were set in place, but our preparations came to a sudden halt upon receiving an email, “Yoav separates milk and meat” (name changed for privacy).

I suggested doing the pesto pasta without chicken, since recipe calls for Parmesan cheese. My husband explained, “No… People expect meat on Shabbat. We need to have a meat meal.” We quickly reorganized and planned for an artichoke chicken recipe instead.

Now, what about dessert?

Disappointment set in. Having a reputation as a pie-maker, I was excited to show off my skills with a pumpkin pie. I had no idea how to, last minute, make this pie without dairy. In a bit of an anxious state over what I would prepare, I was growing annoyed by our situation.

He’s a believer! Doesn’t he know what Yeshua says about this?

A passage from Mark rang in my ears.

Do you not see that whatever goes into a person from outside cannot defile him, since it enters not his heart but his stomach, and is expelled?
Mark 7:18- 19 ESV

My husband was also wrestling through his own gripes, both theologically and practically. Together, we were grumpy and frustrated, expecting guests in several hours. This was not the hospitable environment we desired for our home.

I went to the Lord and asked Him to give me grace for Yoav. Conviction of the Holy Spirit struck my heart as I read through the rest of that passage that I had used to cast judgment on my guest:

And he said, “What comes out of a person is what defiles him. For from within, out of the heart of man, come evil thoughts, sexual immorality, theft, murder, adultery, coveting, wickedness, deceit, sensuality, envy, slander, pride, foolishness. All these evil things come from within, and they defile a person.”
Mark 7:20-22 ESV

Sure, maybe our guest was abiding by the traditions of man, but what was coming out of my heart was no good.

Yoav’s convictions were preventing me from personal creative expression, and to be honest, from receiving a certain amount of “praise” for my talents and abilities. I could gloss over my own heart condition in favor of hating the religious regulations that changed our dinner plans, or I could be honest with myself and realize I was contending with pride.

As I confessed that sin, our guest’s background came to mind. I was aware that he was a first generation believer from an observant Jewish family. His grandparents escaped from Iran in order to avoid anti-Semitic persecution, seeking solace and building a new life in Israel. He was the first in his family born in the land, and the only one to have received Yeshua as Messiah and Savior. Considering the hardship his family had faced, the courage it took for him to boldly proclaim Jesus in his home, my heart melted for him.

A real person existed behind this conviction that differed from my own. I could not possibly understand the responsibility he might feel towards his family, his people, and his culture. The journey of conscience in this matter was between Yoav and the Lord, and I stood unrighteous before God by judging him:

Now with a new perspective, I scaled back my plans and made dairy-free brownies. Our table was set with love and we enjoyed a beautiful evening with our guests. My brownies were less than fluffy, but we were all able to share a little laugh about the texture. It was obvious that Yoav appreciated my good-willed attempt. The Spirit of God dwelt in our home with great freedom that night.

How does this even make sense? By my previous reasoning, yielding to religion and tradition should have restrained the presence of God rather than giving Him room to move.   This was often the case, as I recall memories of red-faced church leaders dismissing youthful desires for a different musical expression during worship.

Maybe they were, but maybe I was missing something.

Through re-examining the Scriptures surrounding religion and legalism in a more literal sense, a new understanding surfaced. The greatest restraint to freedom is not religion, but my own sin nature. The Lord used this clash with tradition to expose sin out of my own heart. The humility my husband and I experienced during our preparations truly made room for the Lord.

I still don’t like religion; however, I like the sin in my own life much less. Repenting of judgment and pride gave me the freedom to make a less than perfect dessert, the freedom to laugh about it, the freedom to love our guests, and the freedom to know the Lord more intimately. It was this act of personal repentance, rather than a critical outcry, that ushered in true presence of God.