We live in a fallen world. One of the evidences of this is that we really have no adequate term to describe the way in which young Christian men and women should get together. Perhaps some time after Christians return to a more obedient practice, we will have been doing it long and well enough to be able to name whatever it is we are doing.

In the meantime, we must use such terms as we have, hence, biblical courtship or biblical dating. We must reject the pattern of abdication, disobedience, and sexual immorality which we see all around us; hence, our rejection of recreational dating, or the modern dating system.

But in doing this, we are bound to use whatever terms we select in a qualified sense. Some couple who “date” are in closer conformity with biblical principles than other couples who embrace the “courtship” model. So in this book I shall routinely refer to courtship, or biblical courtship, and sometimes to biblical dating. If a courting couple goes on a date, we should not all panic and relegate this horror to the same category as nation rising up against nation, or kingdom against kingdom. The end is not yet.

-Douglas Wilson, Her Hand In Marriage (book not endorsed by ylcf.org) 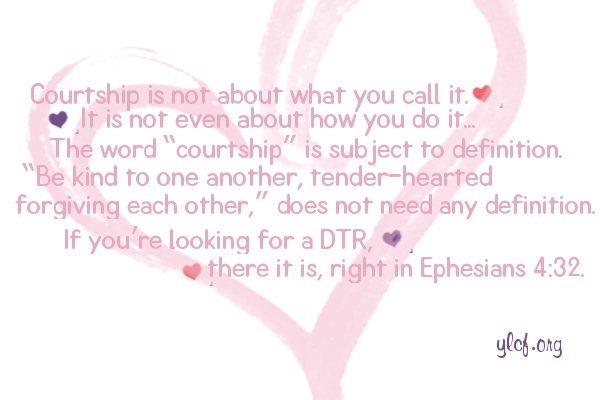 My cousins called me the “Pintship Preacher.” At the ripe old age of thirteen, I was an absolute believer in courtship. The only problem was (in retrospect), believing in courtship presents a slight problem when you aren’t exactly of courting age. I soon learned to term it “waiting instead of dating”. But that really raised the eyebrows of the people who already doubted I’d find a husband in our small town. I told them God knew who my husband was and I was waiting on Him to bring us together.

Well, God turned out to be a pretty good matchmaker. He even found me a guy who had also grown up homeschooled and believed in courtship. Well, sort of. In reality, the young man who became my husband had the old-fashioned belief that God was the ultimate Author on the subject of relationships. In fact, I think Merritt had only read about one other book on the topic in his life. (Almost shocking to a girl who read little else.)

Not only that, but he shattered half the preconceived notions and “convictions” I’d had about romance and relationships. He did ask my dad permission to “court” me. He even got my dad’s permission before he put a ring on my finger. But the “perfect formula” of a guy talking to my dad before I’d ever noticed the guy existed? I know it does happen, but it was certainly not the way God wrote our story. And let me tell you, God writes better loves stories than I could ever dream up, even my wildest imaginations.

Elisabeth could tell you all about it. She’s the official “courtship story link collector” for ylcf.org. But sometimes, when she writes a couple asking for permission to share the link to their story, we have to laugh at their surprised responses: “We never really considered our relationship a courtship…”

I refer to the time when Merritt officially had my dad’s permission to court me as our “courtship.” My mother and grandmother use the same word to describe the years leading up to their marriages—many years before Joshua Harris was born! In fact, not even Bill Gothard originated the word courtship. (And both Joshua Harris and Bill Gothard have admitted to learning a thing or two since they first starting using the C-word. I have, too.)

A few generations earlier, in the year 1828, Noah Webster defined courtship as: “the act of wooing in love, soliciting a woman to marriage.” Thus, those same couples who are shocked we want to use their love story on our courtship stories page realize that their story actually does fit the definition of the word “courtship”—at least in our favorite dictionary. “We never really considered our relationship a courtship…though by your definition, it seems to meet the criteria quite nicely,” agreed one such couple.

When I was a teenager, just as all the internet abbreviations like LOL were being added to our vocabulary, there was another new one, that didn’t (necessarily) have anything to do with the web: DTR. It’s a conversation known as “Define The Relationship”, initiated by either party, in an effort to determine where the relationship is going. Maybe it’s time for us to have a DTR about the word “courtship.” Or rather, an un­-DTR.

The truth is, courtship is not about what you call it. It is not even about how you do it. As much as we want our daughters to have godly, pure, Christ-honoring relationships, we don’t plan to raise them to believe in “courtship.” The word “courtship” is subject to definition. “Be kind to one another, tender-hearted, forgiving each other,” does not need any definition. If you’re looking for a DTR, there it is, right in Ephesians 4:32. And for further explanation, see Hebrews 13:4: “Marriage is to be held in honor among all, and the marriage bed is to be undefiled.”

Call your relationship whatever you like. But whether you court, date, betroth, or dort, do it all to the glory of God!

Meanwhile, we’ll be sticking with the word “courtship” (of Noah Webster’s definition) to describe the memorial stones of God’s faithfulness that we’ve collected here on ylcf.org: the stories of how God brought each man and woman together in His own way, in His own time. 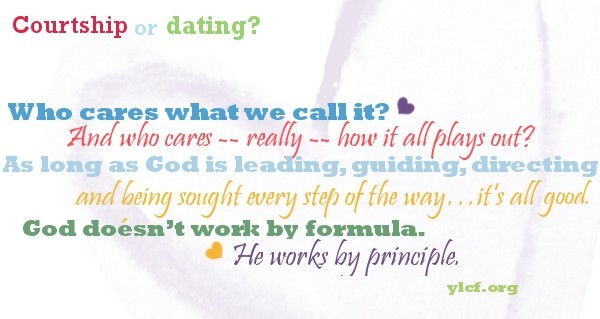 I’m an ardent fan of (and believer in!) Christ-centered relationships and purity in such, but I’m not a fan of formulas, plans, or even, sometimes, books giving the so-called “how-to,” unless they are strictly adhering to the basic principles found in God’s Word…

My biggest pet peeve lies in the “terms” debate. “No, I’m not dating him,” they say. “We are courting.” Oh, thank you… that’s clear as mud. The very terms mean so little anymore; they’ve been twisted to mean so many very, very different things.

Who cares what we call it? And who cares–really–how it all plays out? As long as God is leading, guiding, directing and being sought every step of the way… it’s all good. God doesn’t work by formula. He works by principle.

-Ashleigh in “So do we call it ‘courtship’ or is it ‘dating’?” at Heart & Home (follow the link to read the rest of Ashleigh’s thoughts and all the great discussion that followed her post)

Raising Word Lovers at Mentoring Digital Wordsmiths
Gretchen is a farmer's wife and mommy to their four curly-haired children. Their home is filled with overflowing bookshelves. When she's not reading, Gretchen is blogging about books or coding WordPress websites for authors and bloggers.

Mentoring Digital Wordsmiths, Raising Word Lovers, Community Leader at @KindredGrace
RT @agathonstatus: Reports are that Cloudflare is experiencing a significant outage right now. If your site is having issues and you use Cl… - 2 weeks ago