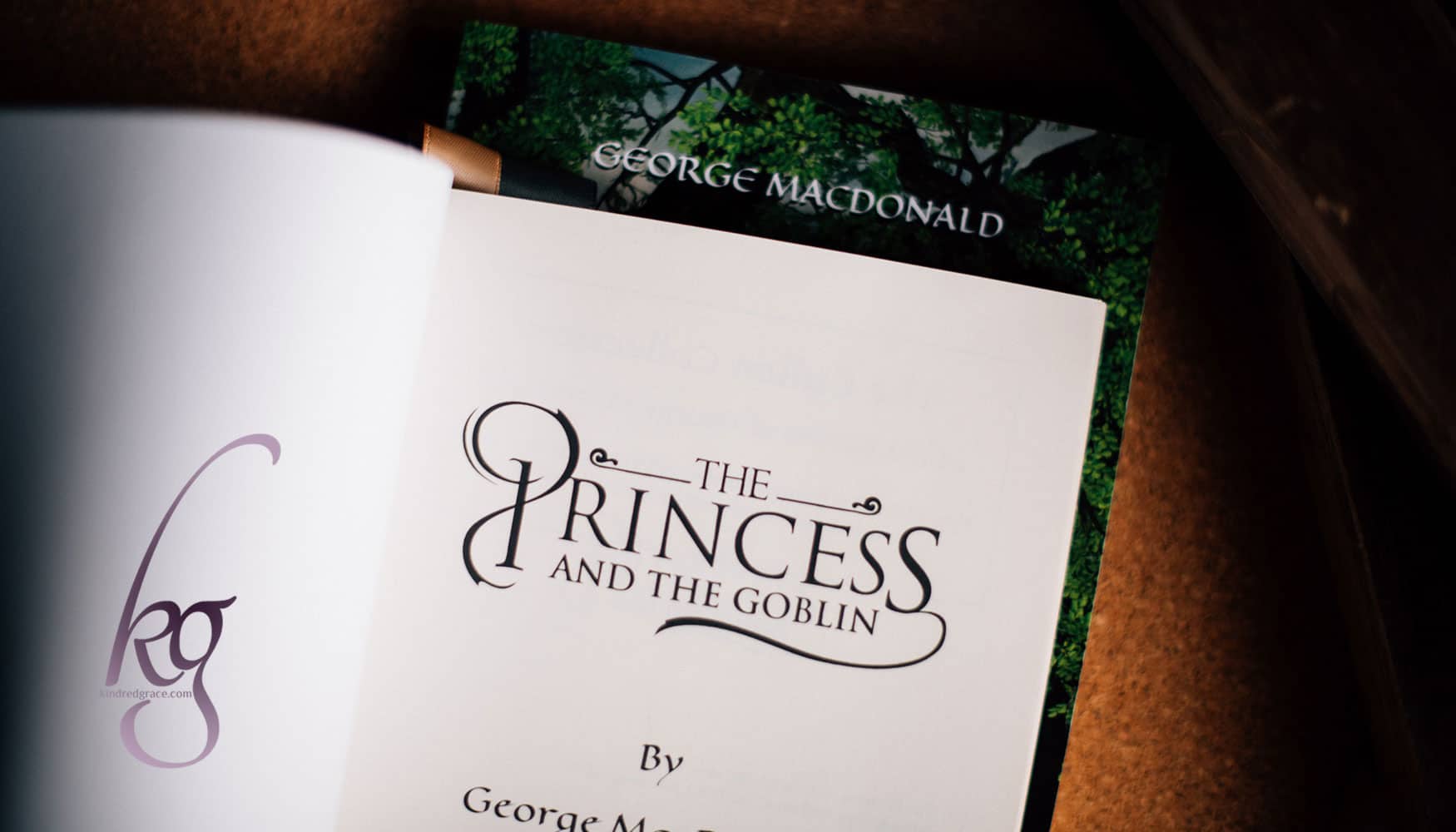 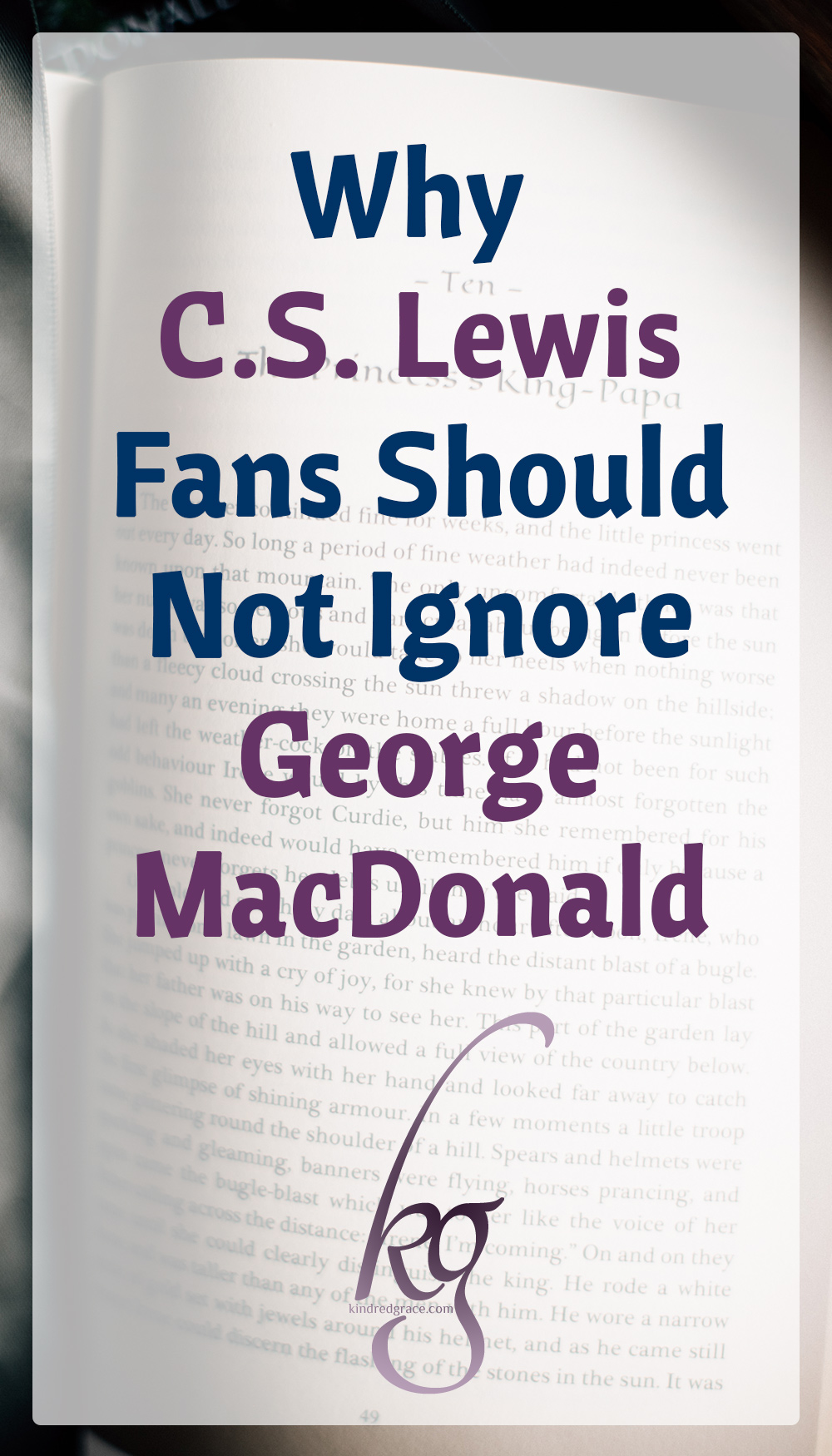 I had just devoured The Chronicles of Narnia. I attacked a huge stack of books like they were the White Witch’s army. After reading all of them, I turned to my mom with quite a good deal of frustration. “They’re good books, but they’re not like Narnia at all!”

Then my mom handed me a copy of The Princess and the Goblin by George MacDonald.

She said, “It’s not Narnia, but I think you’ll like it. It’s about a princess and a miner boy who are called to save their kingdom from goblins.”

It wasn’t until years later that I found out C.S. Lewis–author of my beloved Narnia series–regarded George MacDonald as his master.

“I have never concealed the fact that I regarded him as my master.”
(C.S. Lewis, preface to George MacDonald: An Anthology)

C.S. Lewis wasn’t alone in his regard. Mark Twain, J.R.R. Tolkien, and other great authors of the early 1900s respected MacDonald’s work. In fact, G.K. Chesterton called George MacDonald “one of the three or four greatest men of the 19th century.” Madeleine L’Engle said MacDonald was the “grandfather of us all—all of us who struggle to come to terms with truth through imagination.”

But what about us? What about our generation who grew up reading C.S. Lewis, Hannah Hurnard, Lewis Carroll, and J.R.R. Tolkien? Will we find George MacDonald as appealing as the authors we love?

I am not afraid to say that if you love to read C.S. Lewis, you will love George MacDonald’s books, as well.

Both C.S. Lewis and George MacDonald show but never preach.

If you have Narnian blood coursing through your veins like I do, then you are well aware of the ways Lewis weaves biblical lessons and metaphors into his stories. Of course, we see redemption with Edmund and God’s love with Aslan’s sacrifice.

But one of the most powerful moments comes from The Silver Chair where the Black Knight, who is tied to his chair, calls out in Aslan’s name for someone to save him. Jill, Eustace, and Puddleglum knew this was Aslan’s fourth and final sign:

“You will know the lost prince, if you find him, by this: that he will be the first person you have met in your travels who will ask you to do something in my name, in the name of Aslan.” (The Silver Chair)

At the current moment, the Black Prince was raging like a mad man. To free him would be asking for death. But then dear old Puddleglum gets it right once again.

“I think we do know,” said Puddleglum.

“Do you mean you think everything will come right if we do untie him?” said Scrubb.

“I don’t know about that,” said Puddleglum. “You see, Aslan didn’t tell Pole what would happen. He only told her what to do. That fellow will be the death of us once he’s up, I shouldn’t wonder. But that doesn’t let us off following the Sign.”
(The Silver Chair)

In a few short sentences, Lewis shows us in an unforgettable way how to live by faith. Follow the signs. That’s the only thing we need to do. The rest belongs to God.

I often wonder if C.S. Lewis thought about George MacDonald when he wrote this scene because there’s one like it in The Princess and the Goblin.

“…indeed I fancy I have never written a book in which I did not quote from him.”
(C.S. Lewis, preface to George MacDonald: An Anthology)

Princess Irene’s great-great grandmother gives her a thread to follow if ever she is in danger. It is invisible, but it can be felt.

“Of one thing you may be sure, that while you hold it, I hold it too.”
(The Princess and the Goblin, Chapter 15)

Have you ever thought of your faith as something that God also has in His hands?

When Irene finds herself in danger, she follows the string. To Irene’s surprise, it goes out of the castle and into the wild mountains.

“And still the path grew rougher and steeper, and the mountain grew wilder, till Irene began to think she was going a very long way from home; and when she turned to look back she saw that the level country had vanished and the rough bare mountain had closed in about her. But still on went the thread, and on went the princess.”
(The Princess and the Goblin, Chapter 20)

The thread leads down into the mountains, but still Princess Irene walks with her hand on the thread, trusting what she feels, not what she sees. What does she do when the doubts and darkness arise?

“Every moment she kept feeling the thread backwards and forwards, and as she went farther and farther into the darkness of the great hollow mountain, she kept thinking more and more about her grandmother, and all that she had said to her, and how kind she had been, and how beautiful she was, and all about her lovely room, and the fire of roses, and the great lamp that sent its light through stone walls.”
(The Princess and the Goblin, Chapter 20)

She focuses on the truth. She remembers the good, the light, the beauty. When she feels the thread has disappeared in a huge heap of storms, she despairs. After a few moments of grief and fear, the princess rallies.

“Her fear vanished; once more she was certain her grandmother’s thread could not have brought her there just to leave her.”

After a bit of panic, Irene’s head clears and she solves the puzzle, finding something very good (you’ll have to read the book to find out what it is!).

I love this picture of faith. A thread very few can see guiding us, bringing us through danger, held by God’s hand, leading us to safety.

In fact, it’s so simple that it’s easily missed, but God is a thread that is woven throughout every one of George MacDonald’s 40+ books. 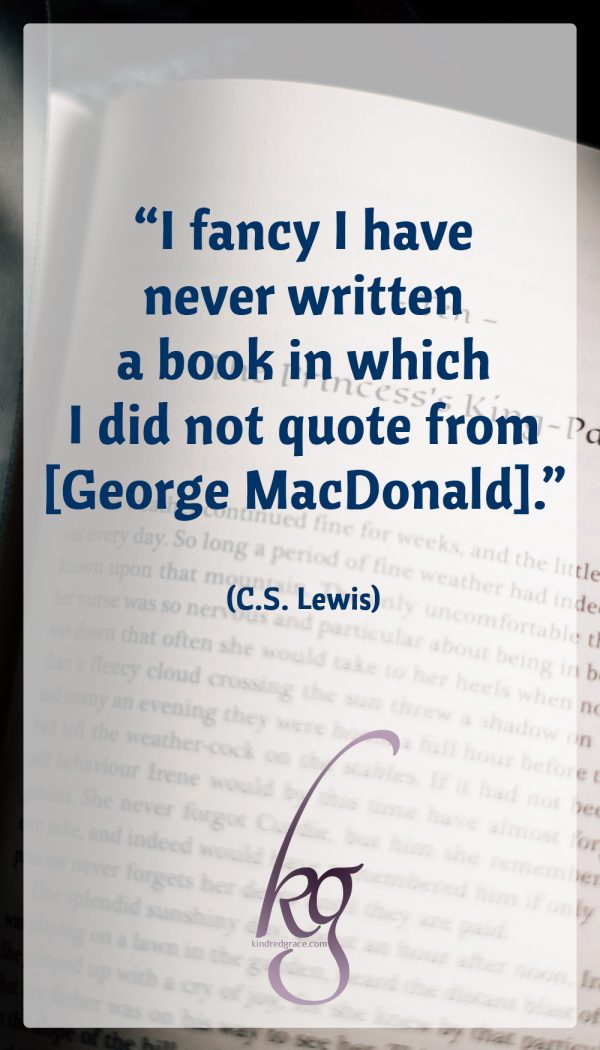 The people of George MacDonald’s fantasies could easily be great friends of Narnians.

However, I like to think that George MacDonald’s fantasies are set in countries neighboring Narnia. I think Peter, Edmund, and the rest would be very good friends with Curdie, and that Lucy and Princess Irene would be soulmates.

Both Lewis and MacDonald touch upon similar longings and desires within us. Do you remember the horror of finding out that the White Witch made it winter without Christmas? What about the joy that came when winter began to thaw?

Freedom from chains. Justice. Faith. Innocence. All of these themes are found in both authors’ works.

Now that I’ve grown up, when I read The Chronicles of Narnia, The Princess and the Goblin, and The Princess and Curdie, I pray that my daughters find men like Peter, Edmund, Caspian, Eustace, and Curdie. Men who value faith, justice, and goodness, who are brave in the face of great danger, who do right when it’s hard.

And for my daughters? I pray they become like Lucy, Susan, Aravis, Jill, and Princess Irene. These girls didn’t just sit, waiting to be rescued. Princesses or not, they worked, battled, and suffered. They fought back evil, rescued those who couldn’t save themselves, and comforted the broken. They walked by faith, loved deeply, and did everything with a childlike heart.

Childlike, not childish. This is another thread of both MacDonald and Lewis. Childish characters are cruel, conceited, deceitful, and vain. Childlike people are able to put aside self for a greater good, to see and love life’s mysteries, to value qualities like honesty, love, and joy far greater than appearance or other passing things.

George MacDonald and C.S. Lewis acknowledge the battle while giving hope of victory.

It doesn’t take too much for us to see what’s wrong in this world, and our children see it. Too many of our more current stories are filled with sadness and hopelessness. Even when good wins, it is often mingled with grief and despair.

You could make a case that this is reality. You can’t have war without death.

But did you know our God isn’t realistic in our sense of the word? The war Jesus fought on the cross defeated Death. The White Witch won for a night, but when dawn broke, her hold was shattered.

Both MacDonald and Lewis give us books where the True King restores all that is good. Hope is made real. Yes, there are defeats and sadness, but in the end, He will set everything right, bringing great joy.

One of my favorite quotes of C.S. Lewis states that our children are going to fight real enemies in this world. After living through two world wars, C.S. Lewis was well-acquainted with evil. His remedy for this? Giving them brave knights and heroic courage.

“Since it is so likely that [children] will meet cruel enemies, let them at least have heard of brave knights and heroic courage.”
(C.S. Lewis, On Three Ways of Writing for Children, in Of Other Worlds)

We know our fight isn’t against flesh and blood, so let’s give our children heroes who fight honorably, who are filled with courage to do the right thing no matter the cost, whose heroes battle for the innocent, and who love God with all their hearts. 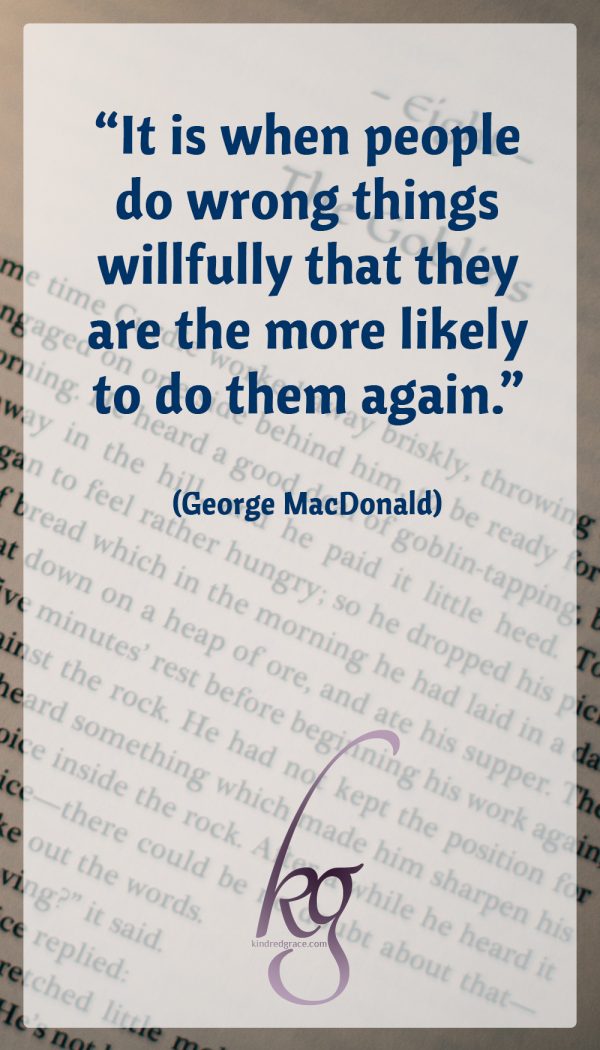 The Princess and the Goblin and The Princess and Curdie are two of my favorite books by George MacDonald. Every time I read them, I see new applications to life on how I can live and serve God better.

“But in the meantime, you must be content, I say, to be misunderstood for a while. We are all very anxious to be understood, and it is very hard not to be. But there is one thing much more necessary.”
“What is that, grandmother?”
“To understand other people.”
(George MacDonald, The Princess and the Goblin, Chapter 22)

“It is when people do wrong things willfully that they are the more likely to do them again.”
(George MacDonald, The Princess and the Goblin, Chapter 15)

“I was doing the wrong of never wanting or trying to better.”
(George MacDonald, The Princess and Curdie, Chapter 3)

So much truth is captured in just these two fantasies. I’m still exploring the rest of his work — four other full-length fantasies and dozens more novels.

I am not going to tell you that MacDonald’s fantasies are as good as Lewis’ Narnia. But through the years, two little books have crept up my bookshelves to the honored top shelf filled with my most beloved books. The Princess and the Goblin and The Princess and Curdie sit next to The Chronicles of Narnia, side by side, like two old friends. I like to think their authors would like this arrangement.

I am not asking you to change your allegiance; Narnia will always be first in my heart. I am asking you to find some quiet library in Cair Paravel. Pull a small book called The Princess and the Goblin off the shelf and as Susan said, “take the adventure that shall fall on us.”

You won’t regret it. 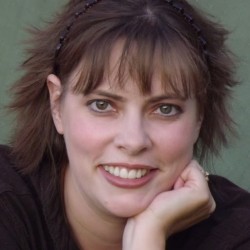