It is a beautiful summer’s day many years ago, the sun shining shimmery-hot and the world vividly green and rich.

She’s four years old and all dressed up in a gingham blue checked dress, her brown hair pretty and pulled back in a bow. Her brothers are dressed up, too, as is fitting for such an important occasion.

For someone is getting married today.

It’s the first time she’s been to a wedding and it is so exciting. 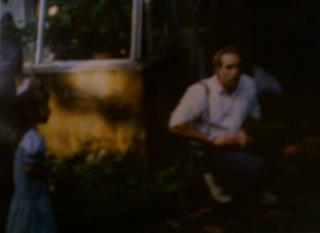 The party is small and the ceremony takes place right there in her family’s living room, the couches and furniture moved out for the day and rows of chairs set in place for guests. She very badly wants to be the flower girl and is upset when she is told, ‘no, there isn’t going to be a flower girl.’ But she holds her tongue and swings her feet in Sunday shoes against the rungs of her chair as she waits for it all to begin.

She watches the bride walk down the aisle, past the rows of chairs, to her groom. She watches them kiss after they say their vows, watches as they feed each other cake and watches as the photographer takes photos of them in the gardens of a family friend. The bride is as beautiful as a princess in her eyes and both she and the groom look so grown up.

Then the little girl grows up and goes to other weddings, sees other brides and other grooms say their vows, each bride as beautiful as a princess and each groom handsome, and every couple joyous-in-love that day. But she always remembers that first one, snapshots of it distinct and warm in her memory, that first wedding when she was little. And she dreams of one day, of being a beautiful bride and of a man to be her husband and groom. She dreams of love that will last forever and be as secure as rock, just like her parents, just like the fairy tales.

Time speeds by and as she watches, some of those couples stay joyous-in-love and others… Well, she learns as time goes by, that happily-ever-afters aren’t always a given. And one day, that first bride and groom find they’ve lost that joyous-in-love and have become two-apart instead of two-together-as-one.

On that day, that little girl turned grown-up cried. She cried for them and every other bride and groom that she saw turn away from each other. And she wondered…wondered so many things.

That little girl in gingham blue was me, over twenty years ago.

And as I prepare for our wedding, as my love and I prepare to begin life together-as-one in less than two months, I can’t help but think of that first wedding I went to. So joyous, so perfect, with every hope and expectation of happily-ever-after…only to end in divorce, separation and two-no-longer-one.

I think of it and I’m afraid.

They began their story just as we are: with every hope and dream of love lasting forever – why else would they vow to love, honor and cherish until death doth part?

How are we any different, my handsome love and I? They were both Christians, just as he and I are. Yes, yes, we are different people, but how can I boast that we will be different just because? I draw even further parallels: that groom young years ago had a job similar in some ways to my groom. It is similar in the fact that, just as fire-fighters have a high rate of divorce, this groom’s field of work, too, has a high rate of divorce.

I can’t control the ending of our ‘story.’

Maybe that’s why I fear.

I can’t make our love last forever because love requires two people freely giving to each other and if I force him to love me forever, it won’t work because love cannot be forced.

It’s a leap of faith, this loving and committing to marriage. It’s promising him my love and holding fast to God’s grace and strength to do so, during good times and bad. It’s believing and trusting that his promise of the same to me is true.

And most importantly, it’s keeping God as the center of our world and keeping Him our joint focus. Looking back, it was the loss of this first love, I know, that hastened the death of that bride and groom’s love for each other. I could see it as it slowly happened, even as a child.

I guess realizing how I cannot control [by myself] the final outcome is a good thing. I know that it would be – and still is – altogether too easy to feel invincible and believe, ‘it could never happen to us.’ Because it could. Love is an action and there will be days when I won’t feel like loving him, I won’t feel like holding my tongue against sharp words nor will I feel like washing his clothes or snuggling next to him in bed at night. We’re both human and we are going to hurt each other, we will let each other down and sometimes, we won’t act out love as we should.

And just as much, there will be days when our walk with God will feel like it’s faltering. When it will be hard to focus on Him during the whirlwind of busyness – and believe me, it looks like we’re going to be busy, busy, busy for the next twenty years! – and…well, maybe, just maybe, we’ll remember: we aren’t invincible. We aren’t perfect. And with that realization, we’ll remember, only through God’s grace and love, we can do this:

Krista is a twenty-something year old who will tell you that words are more her thing than numbers, even if she does earn a living working with the latter. Between working full-time and planning a wedding, she somehow manages to find snatches of time to write snippets of blog posts about books, life and anything currently on her mind (which would mostly be weddings these days!). She loves God and looks forward to seeing what He has in store for her in the next stage of life’s grand adventure. You can read more of her words at her blog, Between the Stacks.

Editor’s Note: Krista married her beloved in May 2011!