My three best friends are wildly different from each other. They have different lifestyles and personalities. Their relationships with me are built on unique-to-us experiences. There is one major thing that all of them have in common, though.

None of them are afraid of silence.

One will sit on the couch and listen to music with me, sometimes for hours at a time, without us saying a word to each other. One of them will wear her headset and homeschool her kids while I’m on the phone with her, only talking to me every once in a while. One of them will come and quietly sit at my kitchen table while I fold clothes on it. We keep an extra chair handy just for her.

These friends, without meaning to, have taught me a secret. They’ve shown me the little-known beauty of silence. 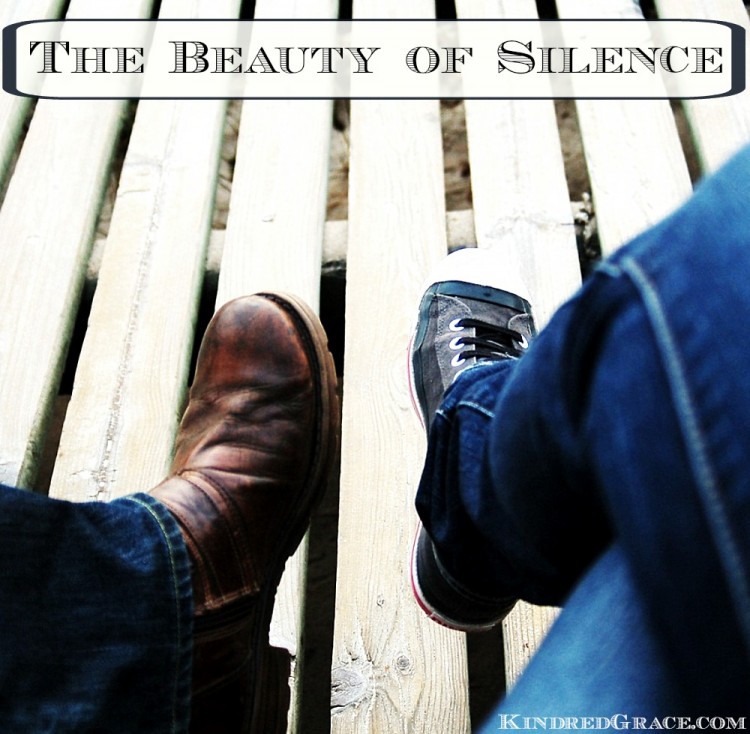 There is a piece of relationship advice that I’ve often heard repeated over the years: “Communicate”.

That is a fantastic piece of advice. I agree that communication is very important in any relationship. However, communication does not always equal conversation. Spoken words are not always necessary to build our bonds.

“They may forget what you said, but they will never forget how you made them feel.”

This modern day proverb applies to more than just what is said; it also applies to what is not said. Our memories are typically built on emotions, not on concrete facts. What we remember when we’re old is largely impacted by what we feel when we’re young. This is why we can rarely remember exact conversations, but we can think back and re-experience the impressions we had while sharing company with someone.

Oftentimes, people hide behind words and busyness. Not talking can be a scary concept, because our voice is our shield. Insecurities quickly rise to the surface during a silence. “Should I be talking? Should she be talking? Why is nobody saying anything?”

Sometimes one may even think that silence is a waste of time. That all we’re doing is just sitting here. We’re not just sitting, though. You’re lending yourself to the person you’re sharing company with. Without words, you’re saying, “I’m here.”

This is especially important during times of grief or turmoil. Presence is a gift far greater than words. Being accessible enables your companion to be vulnerable with you and find healing.

Silence has many beautiful side effects. It stirs the depths of people’s souls, creating an environment of thoughtfulness. When two people share company with each other in silence, it sends the unspoken message: “I’m listening.”  If one of them secretly has something weighing on them, they are much more likely to dig it up and confess it aloud in a quiet atmosphere, rather than having to interrupt an already running conversation. The void helps people be more intentional with their thoughts, which then progresses into more intentional words and choices later. Deeper communication is possible when subjects are brought up in this purposeful manner rather than impulsively blurted out. Where unkind words are usually snapped out of the mouth without much forethought, kind words usually bubble up and spill gently out of the heart. Reactions are typically milder as well, because the listener’s mind has been calmed by the former quietness.

Not only does silence contribute to people-to-people relationships, it can also contribute to our relationship with our Maker. You’d think that since He’s so big and powerful, He’d talk to us with a booming, overwhelming voice. However, most of the time He seems to prefer a more mysterious, quiet approach. 1st Kings 19:11-18 is a great example of this. In that passage of Scripture, the prophet Elijah wishes to hear from God, so he is directed to go to stand on a certain mountain and wait. Presently, a windstorm, an earthquake, and an inferno pass by him, but none of these fearsome occurrences are what he is looking for. Not until he hears a “still, small voice” does he prepare himself to listen. A divine whisper carries much farther when the human heart is silent in anticipation.

What I’m Not Saying

Sometimes there is silence in a relationship because those involved don’t want to talk to each other, even if they should. This is not the kind of silence I’m celebrating. I’m talking about the peaceful kind of silence, not the awful-as-the-tombs silence or the chirping-crickets-awkward silence (although even a good silence may feel like that at first to someone who is not used to it). If there is an issue that needs to be talked over, don’t delay. Put the awkwardness aside and do it.

A Celebration of Silence

Creating an environment conducive to thoughtfulness takes patience and self-control, but it’s worth the effort. I like to think of my time with loved ones like a garden. Sometimes our relationship may require watering, sometimes it may require pruning, sometimes it may require parasite intervention, but much of the time, it requires quietness and patience. It’s surprising how close you can grow to someone just by sitting with them, enjoying life together. In fact, eventually you may discover, like I did, that silence can speak one’s heart in special ways that words cannot.